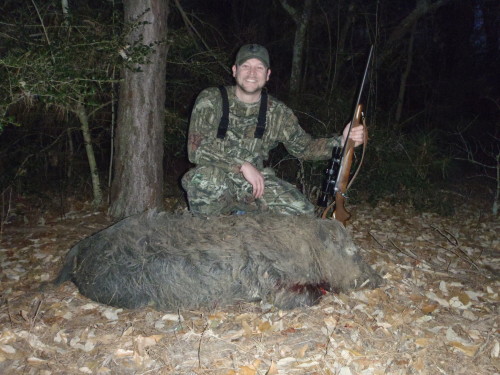 Keep reading to learn the story about my cousin Ted’s first hog.

I just returned from the woods from a successful hunting trip in the woods of East Texas with my father and my cousin Ted. Ted grew up hunting small game with our grandfather in Maryland and has been deer hunting with us before, but had never killed a single big game animal prior to this trip. My father and I aimed to change that on this hunt.

After picking both of us up at the airport in the evening, my dad drove us to our family’s land in East Texas early the next morning. After arriving at our cabin, we checked each of the blinds and feeders and determined that everything was still in working order. It looked like we were getting activity from both deer and hogs at each feeder, which bode well for the hunt.

During the evening of the second day of hunting, Ted was sitting in one of our four deer stands armed with his Ruger M77 in .30-06 Springfield. The stand and the accompanying feeder are located just inside the woods to the west of the main north-south road on the land. A small ravine separates the elevated tree stand from the feeder, which is about 30 yards away to the east. Deer and hogs often travel up and down the ravine and stop to eat at the feeder before crossing the dirt road and disappearing into some very thick brush on the other side.

While the stand was in a good location, the weather was unfortunately not ideal for hunting. With the temperature ranging from the low 50s to the mid 70s, the weather was unseasonably warm. We were fortunate that even though the wind, at 10-15 miles per hour, was a little higher than ideal, it was out of the South and therefore was not blowing from the stand toward either the feeder or the direction where we expected game to appear from.

The previous day, I saw four deer appear out of the thick brush to the front left of the stand and head to the feeder for an evening snack. I advised Ted to ensure that he kept a close eye on that particular area of the woods when he hunted there the next afternoon. Sure enough, around 4:30 PM Ted noticed movement from that direction. He raised his binoculars and saw that the animal was a very large boar moving directly towards him at a brisk pace. Realizing that the hog was not going to stop at the feeder, Ted did his best to raise his rifle and orient toward the hog without alerting it.

Fortunately, the many trees and limbs between him and the hog did a good job of screening his movement and the hog had no idea that he was there. Still moving at a brisk trot, the hog moved down one side of the ravine and started walking up the other side just to the left of where Ted sat in the stand. Ted quickly found the hog in his scope when the hog was barely 10 yards away and squeezed the trigger.

The report of the rifle shattered the silence in the woods and the 180 grain soft point bullet plowed into the boar’s left shoulder. Squealing, he half ran/half fell back down the ravine and climbed up the other side, angling to his left and away from the blind trying to make his escape. Ted quickly chambered another round and fired again, the second bullet striking only a few inches from the first and breaking the opposite shoulder on the way out. After the second shot, the hog again fell and did not get back up.

The hog turned out to be an old boar that weighed 163 pounds live. Though we have killed many hogs on our land in the last few years, this is easily the largest hog we have ever shot there. He had recently been rolling in a wallow and his hair still glistened with water and mud when we recovered him. Like most old hogs, he had a pungent odor and smelled absolutely awful. It’s a difficult smell to describe, but I’m sure that those of you who have dealt with big old boars know exactly what I’m talking about.

We have had quite a bit of hog activity on our land lately with many hog sightings, both in person and on trail cameras. This hog is actually the third one that we have shot this year: my father shot a mid-sized sow (~100 pounds) out of this same stand during opening weekend of deer season and my cousin Brian also shot a sow that weighed 105 pounds about 200 yards to the south during Veteran’s Day weekend. We got a photo on one of our trail cameras of what appears to be the same hog eating from that same feeder just 18 hours before Ted shot him (that photo is at the bottom of the page).

Ted was understandably quite excited about the results of the hunt. There is no experience quite like taking your first big game animal and I know he will treasure the memories of hunt for years to come. When he squeezed the trigger on that magnificent old boar, he entered a fraternity that includes members from all over the world and across thousands of years of history: the brotherhood of hunters.