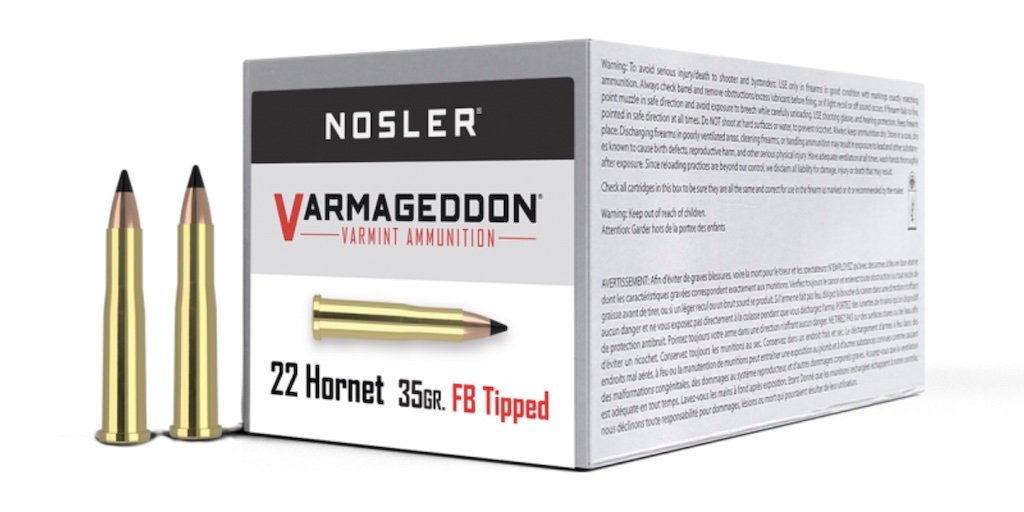 While using the mild mannered 22 Hornet for deer hunting is a controversial topic, the cartridge can be incredibly effective on smaller game like coyotes and prairie dogs. Indeed, many hunters use the 22 Hornet for hunting predators and varmints with excellent results. Here are a few great brands of 22 Hornet ammo that will probably serve you very well next time you’re afield.

Originally designed for varmint and predator hunters in the early 20th Century, the little 22 Hornet cartridge remains in fairly common use to this day. Not surprisingly, several major manufacturers like Federal Premium, Hornady, Remington, Sellier & Bellot, and Winchester produce several different variants of 22 Hornet ammo for hunting predators, varmints, and potentially even bigger game like deer.

The precise origins of the .22 Hornet are a little hazy, but many people credit Grosvenor Wotkyns for developing it in the 1920s using the black powder .22 Winchester Centerfire (WCF) cartridge for inspiration. The little centerfire cartridge quickly caught on with many sportsmen due to its higher velocity, flatter trajectory, light recoil, and excellent accuracy.

Rifle manufacturers have produced the cartridge in a wide range of bolt-action rifles as well as a number of single shots (like the Ruger No. 1) over the years. The .22 Hornet is also widely adopted in Europe where it’s sometimes known as the 5.6x35mm and it’s a fairly popular cartridge in combination guns.

In fact, the 22 Hornet is a noteworthy survival rifle cartridge produced in a couple combination guns/survival guns.

In recognition of the desirable attributes possessed by the cartridge, the US military issued a couple of different .22 Hornet rifles as survival gear during the 1940s through the 1970s. Intended to assist the downed crew in hunting small game for food, the M4 Survival Rifle was a very basic bolt-action rifle used by some fliers in World War II. The military eventually replaced the M4 with the M6 Aircrew Survival Weapon, which was a double barreled combination gun chambered in .410 bore and either .22 Long Rifle or .22 Hornet.

The cartridge is most commonly used afield for varmint and predator hunting today, but the cartridge will potentially work on bigger game too.

Can you use the 22 Hornet for deer hunting?

Assuming it’s legal to use on deer where you live (and it’s illegal to use on big game in some places in the United States), the answer to that question is: absolutely.

Is it a good idea?

In my opinion, no.

Those small, lightly constructed 22 Hornet bullets quite often won’t penetrate far enough to reach the vitals of a deer or other big game animal on a body shot. However, they will really do a number on a deer if you hit them in the neck or the head.

Only take that shot if you really know what you’re doing though, because it’s easy to wound and lose an animal with that sort of shot placement.

Fortunately, the 22 Hornet is ideal for predator and varmint hunting under most conditions.

Indeed, the light report, minimal recoil, and reduced chances of a ricochet with this mild mannered cartridge are all great attributes for hunters in many places.

It’s important to realize that different hunting situations (like hunting deer on one hand vs coyote or prairie dogs on the other) necessitate the use of different kinds of 22 Hornet ammo for best results and using the wrong ammunition can lead to disastrous performance.

For instance, a load that’s ideal for use on groundhogs, foxes, or coyotes would be a terrible choice for use on a bigger animal like a deer.

Fortunately, there are several excellent choices for factory 22 Hornet hunting ammo from a couple different manufacturers.

have a giant margin for error with those smaller bullets.

Luckily, no deer will go far at all if you put a quality bullet through the vitals.

So, regardless of whether you’re using a bolt action Ruger 77/22, a CZ 527, a Springfield Armory M6 Scout, one of the old Winchester Model 70s available in the cartridge, or some other 22 Hornet rifle, there is pretty much guaranteed to be something for everyone on the list below of the best 22 Hornet ammunition for hunting.

In today’s post, I’m going to show you the best 22 Hornet ammo for hunting deer, coyotes, foxes, bobcats, feral hogs, groundhogs, prairie dogs, and other varmints/predators. I’ll also go over the pros and cons of each individual load.

Before we get started, I have an administrative note for you:

Some of the links below are affiliate links. This means I will earn a small commission (at no extra cost to you) if you make a purchase of rifle ammo through those links. This helps support the blog and allows me to continue to create free content that’s useful to hunters like yourself. Thanks for your support.

The polymer tip helps increase the ballistic coefficient and initiate expansion for rapid fragmentation, even at low impact velocities. When used in accurate rifles, this stuff is a really good choice for many hunters. There’s a reason why so many hunters use the V-Max bullet for predator and varmint hunting.

In contrast to the more modern polymer tipped bullets common in 22 Hornet ammo, soft and hollow points were the most popular bullets for .22 Hornet hunting ammunition for many years. While there’s definitely newer and more advanced stuff available today, there’s nothing wrong with using those soft point bullets with a lead core either. This Sellier & Bellot ammunition isn’t the sexiest load, but it will still work really well for hunting a wide variety of game.

In fact, this stuff (along with the Remington ammo below) would be the ammo I’d recommend using if you insisted on using the .22 Hornet for hunting deer or some other species of big game. This is because that 45 grain soft point bullet is one of the heaviest bullet weights available for the 22 Hornet in a factory loading. It’s far from ideal for hunting big game, but I think it’s the best 22 Hornet ammo for deer.

This Sellier & Bellot ammo will also work fine on smaller game like and varmints and the lower muzzle velocity of this ammunition will cause less fur damage than other loadings. All things considered, I’d say this is the best 22 Hornet ammo for all-around hunting use.

First up is this Federal Premium load using their 35 grain Tipped Varmint bullet. This bullet is designed for extremely rapid, almost explosive performance upon impact without excessive penetration. Those are exactly the attributes most desired from a varmint hunting bullet.

The combination of rapid expansion and minimal penetration this ammunition delivers makes it ideal for predator and varmint hunting. The result should be almost instantaneous kills without excessive fur damage on game like coyotes, bobcats, and foxes. It should also work very well on prairie dogs, woodchucks, etc.

All things considered, this is great 22 Hornet ammo for hunting varmints. I do NOT recommend using it for bigger game like hogs or deer though.

Next we have a Nosler Varmageddon 22 Hornet ammunition load using their 35 grain FB Tipped Varmageddon (flat base tipped) bullet. This particular bullet has a polymer tip that slightly increases the ballistic coefficient of the bullet and also helps initiate expansion upon impact.

These bullets also deliver violent expansion upon impact. Nosler goes one step farther with these bullets by manufacturing them with a flat base (instead of a boat-tail). This slightly decreases the ballistic coefficient of the bullet, but makes results in a bullet that’s often easier to shoot accurately at shorter ranges (inside 200 yards).

At practical ranges, this Nosler ammo should deliver almost bench-rest accuracy as well as violent and explosive expansion. Once again, this 22 Hornet ammo is absolutely deadly on animals like prairie dogs, groundhogs, foxes, and coyotes and I highly recommend it for varmint hunters.

Similar to the Sellier & Bellot ammo above, this Remington High Performance Rifle ammunition isn’t the sexiest load, but is still a good choice for hunting a wide variety of game.

This is another good ammo if you insisted on using the .22 Hornet for hunting deer or some other species of big game. I still don’t love the 22 Hornet for deer hunting, but I think this stuff is among the best 22 Hornet ammo for deer.

This Remington ammo will also work fine on smaller game like and varmints, but I don’t think it’s quite as good in that role as some of the lighter bullets I also recommend. Even so, I’d say this is the best 22 Hornet ammo for all-around hunting use. It’s more likely to produce an exit wound than a lighter bullet, so keep this in mind if minimizing fur damage is important to you.

Built using many of the same design principles as the Federal, Hornady, and Nosler Varmint ammo also mentioned in this article, Winchester’s Varmint-X ammo is really bad news for coyotes, prairie dogs, woodchucks, foxes, etc. Built with a thin jacket and a polymer tip, it will rapidly expand on impact.

These bullets will rapidly transfer a lot of energy to the animal as they almost explosively expand upon impact. Wounds will be large and devastating, but not very deep. As such, these bullets are unlikely to exit from bigger predators like coyotes. Use this Winchester ammo on really small animals (like prairie dogs and ground squirrels) or on larger animals (like bobcat, coyote, and fox) in situations where you want to minimize fur damage from exit wounds.

Similar in overall design and performance to the Remington load I mentioned earlier, this Winchester Super-X rifle loading using 45-grain bullets is another nice 22 Hornet ammo offering for those who prefer a heavier bullet. Like the Remington load, this is what you should use if you want to use the 22 Hornet for deer hunting or if you want the best choice of 22 Hornet ammo for hunting the widest range of game from prairie dogs up to deer.

Since the performance of this Winchester Super X load is so similar to that delivered by the Remington 22 Hornet load, the better choice is the one that’s easier for you to obtain or the one that shoots better in your rifle.

NEXT: BEST 300 BLACKOUT AMMO FOR HUNTING DEER, & OTHER BIG GAME