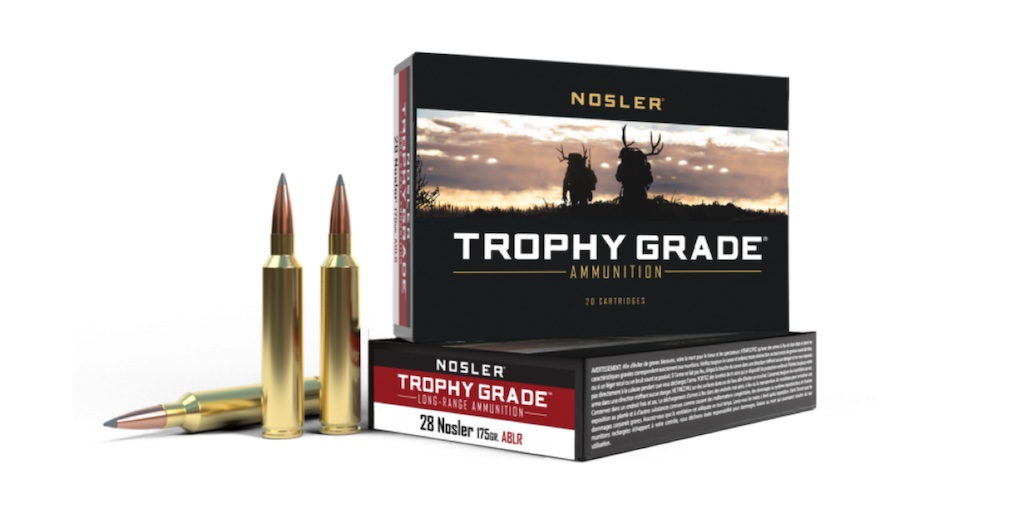 Many people use the flat shooting and hard hitting 28 Nosler for hunting elk, deer and many other species of big game with excellent results. Here are a few great brands of 28 Nosler ammo that will probably serve you very well next time you’re afield.

Released in 2015, the 28 Nosler cartridge was developed by blowing out, shortening, and necking down a 404 Jeffrey case. The resulting 7mm cartridge has an overall length of 3.34″, which is short enough to fit in a standard-length action. Even so, the large diameter case has a gigantic powder capacity.

That massive powder capacity allows the 28 Nosler to fire heavy 7mm bullets at a very high muzzle velocity. The end result is that the 28 Nosler is one of the flattest shooting and hardest hitting standard length cartridges available, which has made it popular among hunters looking for great performance at long distances in recent years.

While it is definitely the most popular and widely adopted of all the Nosler cartridges, not all manufacturers produce ammunition for it as it is still a specialized and relatively new cartridge. However, Federal Premium and Hornady both join Nosler in producing factory 28 Nosler ammunition for hunting elk, deer, moose, black bears, and many other big game animals in North America and elsewhere.

The 28 Nosler is especially well suited for hunting bigger game like elk at extended range and this is reflected in many of the factory 28 Nosler ammunition options available.

However, the cartridge is not limited to use on larger game or for use at extended range. Indeed, it will work just fine at shorter range as well as on deer sized game.

That said, different situations (like deer or pronghorn at long range vs moose at short range) necessitate the use of different kinds of 28 Nosler ammo for best results.

Instead, it’s best to stick with 28 Nosler ammo specifically designed for hunting.

Fortunately, there are some excellent 28 Nosler factory loads specifically designed for just about every conceivable big game hunting situation. So, regardless of whether you’re using a bolt action Browning X-Bolt, a Nosler M21, a Savage 110, or some other hunting rifle, there is pretty much guaranteed to be something for everyone on the list below of the best 28 Nosler ammunition for hunting.

In today’s post, I’m going to show you the best 28 Nosler ammo for hunting elk, deer, moose, black bear, pronghorn, and all sorts of other big game. I’ll also go over the pros and cons of each individual load.

Update July 2022: Ammo supplies finally look like they’re starting to recover. We still have a long way to go and selection is still nowhere near where it was back in 2019, but things are a lot better now than they were even 6 months ago.

Click the link below if you just want to quickly check what 28 Nosler ammo is in-stock and ready to ship so you can hit the range and get ready for hunting season.

Nosler produces 28 Nosler ammo as part of their Trophy Grade Long Range line loaded with their AccuBond Long Range Bullets. The 175 grain AccuBond Long Range bullets used in this loading have a bonded core and have both the highest BC and use the heaviest bullets available in a factory load for the cartridge.

That heavy for caliber, extremely aerodynamic bullet maximizes the strengths of the high velocity 28 Nosler cartridge and delivers heavy hitting, flat shooting, and wind bucking performance out to extended range. This bullet also works great with the 1:9″ twist barrels that are common with 28 Nosler rifles.

Indeed, the 28 Nosler is capable of shooting a more aerodynamic bullet faster than many popular magnum cartridges like the 7mm Remington Magnum and the 300 Winchester Magnum. For instance, the 175gr ABLR has a BC of .648 and the 28 Nosler can shoot that bullet about 250fps faster than the 7mm Rem Mag and the 300 Win Mag can shoot 168gr ABLR (.616 BC) and 190gr ABLR (.597 BC) bullets respectively in Nosler factory loads.

This translates into more retained energy, a flatter trajectory, and more resistance to wind deflection for the 28 Nosler.

With all that in mind, this is the best choice of a factory load for a hunter looking to maximize the all-around performance of the 28 Nosler. That bullet is soft enough to deliver devastating terminal performance on game like deer and pronghorn, but is also tough enough to reach the vitals on bigger and tougher game like elk and moose from typical shooting angles.

By the same token, this bullet has a very high ballistic coefficient and, thanks in part to the combination of using Nosler brass with Nosler bullets, is also capable of outstanding accuracy.

All of those factors combine to facilitate use on big game at extended range.

All things considered, I think this is hands down the best 28 Nosler ammo for use on all manner of game and under the widest possible variety of hunting situations.

The fire breathing 28 Nosler absolutely excels at long distance where the flat shooting and wind bucking characteristics of the cartridge become extremely important. It should come as no surprise then that Hornady includes the 28 Nosler in their Precision Hunter line of factory ammo.

In fact, this particular load is the only Hornady 28 Nosler ammo offering right now.

Loaded with the extremely aerodynamic Extremely Low Drag eXpanding (ELD-X) bullet, this ammo line is designed for western hunters going after game like mule deer or pronghorn antelope who need the very best ammo for a long range hunting situation. Using a 162 grain ELD-X bullet, that load is a very good 28 Nosler ammo option for hunters looking to squeeze every bit of long range performance out of the cartridge.

Hornady advertises that the ELD-X bullet has the best-in-class ballistic coefficients over their entire trajectory. Though the 162gr ELD-X doesn’t quite match the BC of the 175gr ABLR just discussed, it comes close and actually has the 2nd highest ballistic coefficient of all the 28 Nosler ammo options on this list.

Though the ELD-X does not have a bonded core like the Hornady InterBond, the ELD-X does feature a thicker jacket and the Hornady InterLock ring to help increase weight retention, control expansion, and minimize the chances of core-jacket separation. For this reason, the ELD-X is still devastating on deer and pronghorn sized game, but it’s also a much better choice than their SST bullet for use on larger game.

That said, the ELD-X is still a little too fragile for my tastes. This is especially true at really high impact velocities that are common with the 28 Nosler out to several hundred yards.

Many hunters use this exact ammunition on elk each year with a lot of success. Personally, I prefer a tougher bullet for elk sized game (like the Partition, AccuBond, or Terminal Ascent also on this list).

I think the ELD-X is perfect for deer sized game though.

Even so, this 28 Nosler ammunition is capable of maximizing the strengths of the 28 Nosler cartridge and delivering great terminal performance on big game for shots at 400+ yards with great results.

Manufactured by Nosler as part of their Trophy Grade Ammunition lineup and loaded with the legendary Nosler Partition bullet, this is hands down the best 28 Nosler ammo for elk, moose, or bear hunting at shorter ranges. That 160 grain Nosler Partition bullet is perfect for hunting really big game where it’s really important to use a heavy, well constructed projectile.

The only downside to this ammunition is that it is not very aerodynamic and doesn’t have a very flat trajectory. However, it will still work great for hunting game up to and including elk and moose inside 400 yards. I personally wouldn’t use the 28 Nosler on brown bear, but this is a good ammo choice in that role as well.

This 160 grain Partition doesn’t have a very high BC compared to some of the other 28 Nosler ammo options, but it still has a pretty flat trajectory and surprisingly long effective range since this loading has a screaming fast muzzle velocity. Indeed, it still carries over 2,000 ft-lbs of energy out to 500 yards!

If you think you’ll need better 28 Nosler ammo for elk hunting at longer range, go with the 175gr AccuBond Long Range or 155gr Federal Terminal Ascent loadings also recommended on this list. The same applies if you just want a better all-around hunting load that offers a combination of good performance at short as well as extended range.

However, the 160gr Nosler Partition is a really good choice at shorter range and it’s absolutely devastating on game at the high impact velocities common with the 28 Nosler.

Make no mistake: the Nosler Partition is a very old bullet design, but it remains one of the best hunting bullets around and has a proven track record over the course of many decades. If you do your part as a hunter, it won’t let you down at the moment of truth.

Federal’s Terminal Ascent load featuring a 155gr Terminal Ascent bullet is outstanding 28 Nosler ammo for elk hunting, especially for hunters that want outstanding extended range performance. The new Terminal Ascent Bullet is pretty aerodynamic, has an excellent reputation for accuracy, and is also constructed to deliver a good balance of expansion and penetration.

Indeed, the Terminal Ascent bullet has a bonded front core and solid rear shank that make it a good option for those who want great long range performance without running the risk of bullet failure on close range, high velocity impacts.

With those things in mind, I think the Terminal Ascent is another really good option for moose and elk hunting with the 28 Nosler. It will also work great on smaller game like mule deer or pronghorn.

This particular load is the only Federal 28 Nosler ammo offering right now.

The 160gr Nosler Partition is my #1 recommended 28 Nosler load for elk hunting at ranges inside 300 yards. However, in addition to that 175gr AccuBond Long Range load, I think this Terminal Ascent offering is another good option for 28 Nosler ammo for elk hunting at longer ranges. It’s also my #2 recommendation (behind the 175gr ABLR) for hunters who plan on doing ANY hunting where you might need to take a shot at ranges past 400 yards on game like whitetail deer, mule deer, and pronghorn.

Perhaps most importantly though, the E-Tip bullet used in Nosler Expansion Tip ammunition is lead free, which makes this ammo a great choice for use in states like California. In fact, this is one of the very few California legal 28 Nosler ammo options for those who do not handload.

Available using 150 grain E-Tip bullets, this is a good option for hunting just about any species of game you’d reasonably pursue with the 28 Nosler cartridge: deer, feral hogs, pronghorn antelope, black bear, elk, and even moose.

I’m a big fan of the Nosler E-Tip line in general and highly recommend this ammunition. While this particular bullet does not fully take advantage of all the strengths of the 28 Nosler cartridge, it’s still a very capable loading and is effective on a wide variety of game.