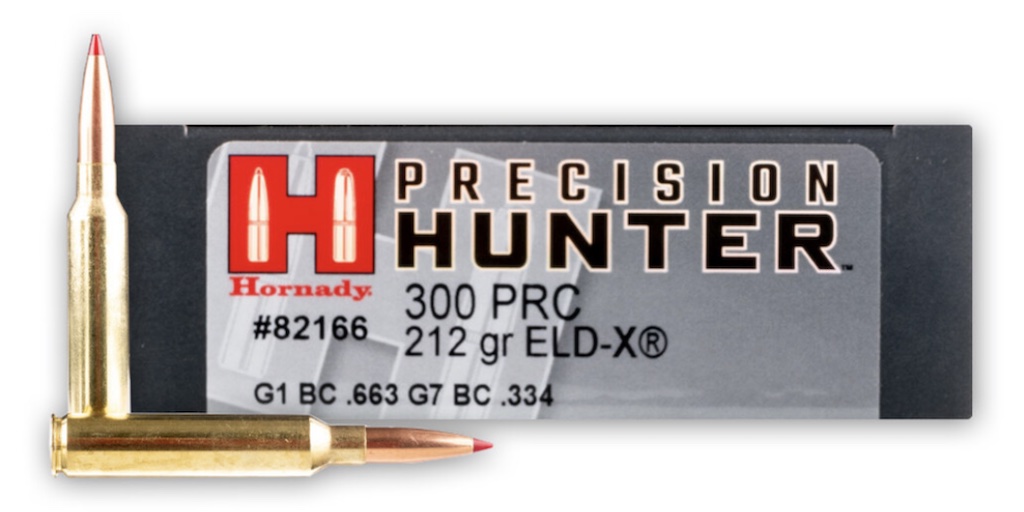 Many people use the hard hitting 300 PRC for hunting elk, deer and many other species of big game with excellent results. Here are a few great brands of 300 PRC ammo that will probably serve you well next time you’re afield.

Released in 2018, the 300 Precision Rifle Cartridge (sometimes known as the 300 Hornady PRC or just 300 PRC) is a 30 caliber magnum cartridge purpose built for a high level of accuracy and the best possible performance at extended range. Designed from the start to use heavy for caliber, extremely aerodynamic bullets that deliver excellent performance at long range, the 300 PRC has started to catch on with the hunting community.

Built by modifying a 375 Ruger cartridge case necked down to use 30-caliber bullets, the 300 PRC has a long neck length with an abnormally long head height. The 300 PRC has an overall length of 3.7″ which necessitates the use of a magnum length rifle action though.

The 300 PRC case is also pretty darn big and has a large powder capacity, especially when compared to similar cartridges.

The end result is a flat shooting, hard hitting, and wind bucking 30-caliber magnum cartridge optimized for long-range shooting. Not only is the cartridge great for punching paper and banging steel at long distances, but the 300 PRC is a capable of delivering the goods on game ranging from deer up to elk and moose at longer ranges. These factors have led to the increasing popularity of the 300 PRC among hunters in recent years.

I wouldn’t say it’s the hottest new cartridge on the market, but it’s definitely gaining in popularity and it may well be the premier long-range cartridge in use today.

Unfortunately, not all manufacturers produce ammunition for it as it is still a specialized and relatively new cartridge. However, Federal Premium recently joined Hornady in producing factory 300 PRC ammunition for hunting elk, deer, moose, black bears, and many other big game animals in North America and elsewhere. Hopefully, other companies will follow Federal’s lead here too.

While the 300 PRC has more than enough power for use on deer sized game, it is also powerful enough for use hunting bigger game like elk and moose when using heavy for caliber, premium ammunition loaded with controlled expansion bullets.

It’s important to realize that different hunting situations necessitate the use of different kinds of 300 PRC ammo for best results and using the wrong ammunition can lead to disastrous performance.

For instance, a load using a rapidly expanding bullet that’s ideal for use on whitetail deer would be a terrible choice for use on really big game like moose or elk, especially at close range.

Make no mistake, the 300 PRC is more than enough for hunting elk and moose, but bullet selection is very important if you plan on using the 300 PRC for elk.

Fortunately, hunters now have access to a great selection of controlled expansion bullets that perform very well on really large game like elk and moose.

Keep all of this in mind when you select 300 PRC ammo for an upcoming hunt.

Additionally, while they can be very accurate and are certainly capable of killing big game animals, I don’t recommend using bullets designed for target shooting or marketed as match ammo like the Sierra MatchKing or Hornady ELD Match for hunting.

This is because target or match bullets usually aren’t designed for optimum terminal performance on big game animals and you may run into issues with poor penetration.

Fortunately, there is a decent (and growing) selection of 300 PRC factory loads specifically designed for just almost any big game hunting situation in the United States or elsewhere in the world. So, regardless of whether you’re using a bolt action Browning X-Bolt, a Christensen Arms Ridgeline, a Bergara HMR, or one of the other 300 PRC rifles available from other gun manufacturers (like GA Precision, Hill Country Rifles, Accuracy International), there is pretty much guaranteed to be something for everyone on the list below of the best 300 PRC ammunition for hunting.

In this article, I’m going to provide recommendations for the best 300 PRC ammo for hunting elk, deer, pronghorn, black bear, and all sorts of other big game. I’ll also go over the strengths and weaknesses of each individual load and so you can select the right ammunition for your specific needs.

The 300 PRC excels at long distance where the flat trajectory and extreme wind bucking characteristics of the cartridge become extremely important. It should come as no surprise then that Hornady includes the 300 PRC in their Precision Hunter line of factory ammo. As a matter of fact, this was the very first factory hunting ammo option for the cartridge and it’s still a good choice today.

Loaded with the extremely aerodynamic Extremely Low Drag eXpanding (ELD-X) bullet, this ammo line is designed for western hunters going after game like mule deer or pronghorn antelope who need the very best ammo for an extended long range hunting situation. Using a 212 grain ELD-X bullet with a Heat Shield Tip, that load is a very good 300 PRC ammo option for hunters wanting to maximize the extended range performance of the cartridge.

Hornady advertises that the ELD-X bullet has the best-in-class ballistic coefficients over their entire trajectory and that their Precision Hunter ammunition also offers match grade accuracy (usually sub-MOA).

Though the ELD-X does not have a bonded core like the Hornady InterBond, the ELD-X does feature a thicker jacket and the Hornady InterLock ring to help increase weight retention, control expansion, and minimize the chances of core-jacket separation. For this reason, the ELD-X is still devastating on deer and pronghorn sized game, but it’s also a much better choice than their SST bullet for use on larger game.

That said, the ELD-X is still a little too fragile for my tastes. Many hunters use this exact ammunition on elk each year with a lot of success. Personally, I prefer a tougher bullet for elk sized game (like the Hornady CX or Federal Terminal Ascent also on this list) if a close range encounter is a possibility.

At very high impact velocities (like with a 50 yard chance encounter with an elk), it’s possible the bullet will expand too rapidly and not deliver adequate penetration to reach the vitals from some angles.

I think the ELD-X is perfect for elk at 200+ yards and for deer sized game at all ranges in the right hands though.

Hornady introduced their new Outfitter line of ammunition a few years ago and just added the 300 PRC cartridge to that lineup. Though it will also work quite well on a whitetail deer hunt in the back 40, the company markets this 300 PRC ammo specifically for use on guided hunts in really tough environments like a caribou or moose hunt in Alaska or a kudu hunt in South Africa.

While these aren’t especially heavy bullets by 300 PRC standards, the 190 grain CX bullets used in this ammunition are extremely tough and are designed for controlled expansion, high weight retention, and deep penetration on large, heavy boned animals like elk and moose. This is high-quality ammunition that also uses nickel-plated case for reliable feeding and corrosion resistance under the most demanding conditions. The primers and case necks are also sealed.

With all those things in mind, it’s easy to see why Hornady advertises their Outfitter 300 PRC ammo for use on a big hunt that’s the culmination of years of saving and planning. After all, when the chips are down on the hunt of a lifetime, the absolute last thing you need is for your ammo to fail at the moment of truth.

Look really hard at this 190gr CX (as well as the 215gr Terminal Ascent) for the best 300 PRC ammo for elk or moose as it’s one of the few options available that will reliably deliver heavy hitting and deep penetrating performance on all manner of game at any reasonable range.

The CX bullet used in Hornady Outfitter ammunition is lead free, which makes this ammo another good choice for use in states like California. Note: the CX bullet replaced the older GMX bullet from Hornady and is a tiny bit more aerodynamic, but retains the great terminal performance of the GMX.

Federal recently added the 300 PRC to their Terminal Ascent line, which is great news as it’s another good option of 300 PRC hunting ammo for hunters looking for really good extended range performance using a tougher bullet. This ammunition uses the new Terminal Ascent Bullet, which is are also extremely aerodynamic and accurate high performance bullets. It’s not quite as aerodynamic as the Hornady ELD-X, but it still has a relatively high BC and is also much more robustly constructed.

With those things in mind, I personally tend to lean more towards the Terminal Ascent over the ELD-X for hunting bigger game like elk with the 300 PRC. This ammo is another great option for hunters going after game out west like mule deer or pronghorn who need excellent 300 PRC ammo for a long-range hunting situation.

If this ammunition shoots accurately in your rifle, this is another good option (along with the 190gr Hornady CX) for hunters who need good 300 PRC ammo for elk hunting because it’s such a tough bullet that can be counted on for devastating performance on all manner of game at virtually any reasonable range.

Hornady initially launched the 300 PRC in both their Precision Hunter and Match lineups. The Match offering uses a 225gr ELD Match bullet with a ridiculously high BC of .777 and is the very definition of a high BC match bullet.

As you can probably imagine, this ammunition is optimized for the highest levels of accuracy, consistent velocity, and exceptional aerodynamic performance at extreme range.

With that said, these are exceptionally heavy and long bullets, but they’re not designed for hunting. Some hunters have used them with a great deal of success on deer and elk, but the ELD Match bullet is not designed for reliable expansion on game.

Instead, they have a nasty habit of either punching straight through animals without expanding at all, or “grenading” on impact.

I only mention these bullets in this article because I know hunting ammunition options for the 300 PRC are somewhat limited and because some hunters absolutely swear by the ELD Match bullets in general. I wouldn’t go hunting with this stuff myself, but it’s an option for those who can’t find anything else or who just insist on hunting with match ammunition.

Use this ammunition at your own risk for anything other than punching paper or banging steel though.