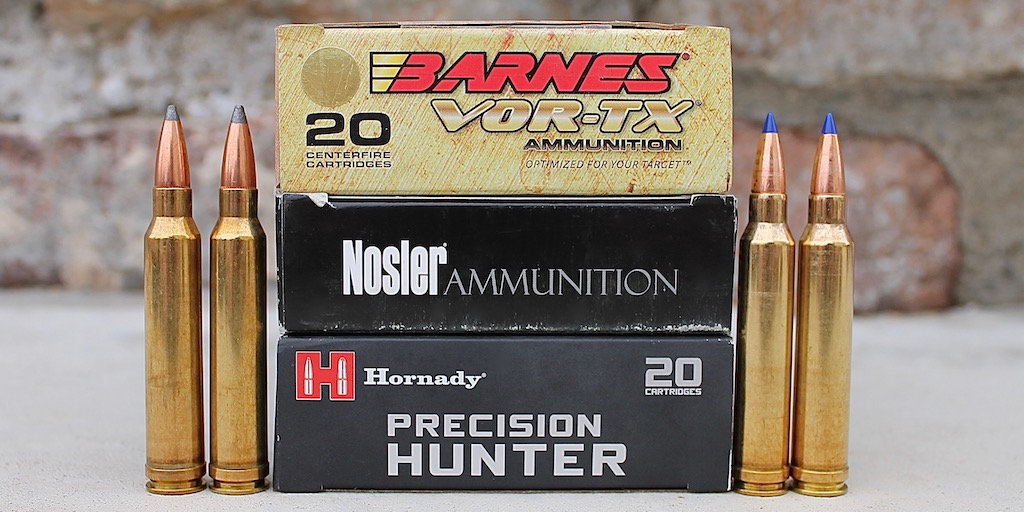 Many people use the flat shooting and hard hitting .300 Win Mag for hunting elk, deer and many other species of big game with excellent results. Here are a few great brands of .300 Win Mag ammo that will probably serve you very well next time you’re afield.

The .300 Winchester Magnum cartridge exploded onto the scene in the 1960s and has been a favorite among hunters all over the world ever since then. For that reason, just about every big manufacturer like Barnes, Federal Premium, Fiocchi, Hornady, Norma, Prvi Partizan (PPU), Sellier & Bellot, Remington, and Winchester produces several different variants of .300 Win Mag ammo for hunting elk, deer, moose, bear, and many other big game animals.

Known for being really accurate, having a flat trajectory, and for retaining lots of kinetic energy at extended range, the .300 Win Mag is well suited for hunting a wide range of big game at short, medium, and even long range. However, different situations (like deer or pronghorn at long range vs moose at short range) necessitate the use of different kinds of .300 Win Mag ammo for best results.

While they are very accurate and are certainly capable of killing big game animals, I don’t recommend using bullets like the Hornady ELD Match and Sierra MatchKing hollow point boat tail (HPBT) for hunting because they usually aren’t designed for optimum terminal performance on big game animals.

Fortunately, the .300 Winchester Magnum is one of the most popular hunting cartridges in North America and there are a wide variety of .300 Win Mag factory loads specifically designed for just about every conceivable big game hunting situation. So, regardless of whether you’re using a Winchester Model 70, a Remington Model 700, a Ruger Hawkeye, a Savage 110, a Weatherby Vanguard, or some other hunting rifle, there is pretty much guaranteed to be something for everyone on the list below of the best .300 Win Mag ammunition for hunting.

In today’s post, I’m going to show you the best .300 Win Mag ammo for hunting elk, deer, feral hogs, black bear, and all sorts of other big game and go over the pros and cons of each individual load.

If you’re a hunter who loves Barnes bullets, then you’re in luck because Barnes produces some great .300 Win Mag ammo as part of their VOR-TX line. Featuring their legendary copper Tipped Triple Shock X (TTSX) bullet, this ammunition is designed for rapid expansion, high weight retention, and deep penetration. Available using a 150 grain, 165 grain, or 180 grain .30 caliber bullets, Barnes offers three outstanding choices for hunters regardless of what they’re after.

The 180 grain load is quite possibly the best .300 Win Mag ammo for elk, bear, and moose hunting. The 165 grain load will also work for larger game like elk, but it’s perfect for bigger deer and bear. That high velocity 150 grain load is great .300 Win Mag ammo for deer and pronghorn hunting, especially for hunters who want a couple hundred extra fps and a really flat trajectory to minimize their holdover for a longer shot. All that being said, there’s certainly a lot of overlap on the acceptable hunting uses for those three bullet weights as well.

All three loads are also 100% copper, which makes them an ideal choice of .300 Win Mag hunting ammunition for use in states like California that that don’t permit the use of lead bullets.

The Barnes VOR-TX line is my personal favorite .300 Win Mag ammo for all my hunting. I’ve used that 165 grain load with a lot of success on both deer and pronghorn over the past few years. This is ammo is also a favorite among many North America, New Zealand, and Africa hunting outfitters.

The Nosler Trophy Grade line of ammo will very likely fit the bill for those looking for some seriously heavy hitting .300 Win Mag ammo for elk, moose, or bear hunting. Loaded with a 200 grain Nosler Partition bullet, this load is perfect for hunting really big game where it’s really important to use a heavy, well constructed bullet. With that in mind, this is also perfect .300 Win Mag ammunition for an African safari for really large or tough game like kudu, blue wildebeest, or eland.

Though it doesn’t have the flattest trajectory out there, this load retains energy very well, so this is still excellent .300 Win Mag ammo for hunting at a reasonable range. The Nosler Partition is a very old bullet design, but it remains one of the best hunting bullets around and has a proven track record over the course of many decades and won’t let you down at the moment of truth. Nosler also produces a similar load in their Trophy Grade line featuring the newer Nosler Accubond bullet.

The .300 Winchester Magnum is an excellent long range cartridge and Hornady’s Precision Hunter line contains an outstanding .300 Win Mag ammo option for hunters looking to squeeze every bit of long range performance out of the cartridge. Loaded with the extremely aerodynamic Extremely Low Drag eXpanding (ELD-X) bullet, this ammo is perfect for western hunters going after game like elk, mule deer, or pronghorn who need the very best .300 Win Mag ammo for a long range hunting situation.

Hornady advertises that the ELD-X bullet has the best-in-class ballistic coefficients over their entire trajectory and that their Precision Hunter ammunition also offers match grade accuracy (usually sub-MOA).

Though the ELD-X does not have a bonded core like the Hornady InterBond, the ELD-X does feature a thicker jacket and an InterLock ring to help control expansion, increase weight retention, and minimize the chances of core-jacket separation. For this reason, the ELD-X is still devastating on deer and pronghorn sized game, but it’s also a much better choice than their SST bullet used in the Hornady Superformance line for use on larger game.

Add it up and you have some .300 Winchester Magnum ammunition that’s capable of delivering great terminal performance on a wide range of big game for shots at 400+ yards.

If you’re a “meat and potatoes” kind of hunter who wants some reasonably priced and dependable 300 Win Mag ammo for hunting deer, elk, feral hogs, and black bear, then the Remington’s 180 grain Core Lokt soft point will probably work really well for you (it’s also available as a 150 grain soft point load which is good for deer hunting).

It’s not the latest and greatest stuff by any means, but this .300 Win Mag ammunition has been around for a long time and countless hunters have successfully used Core Lokt ammo to take just about every species of big game in North America. The same goes for hunts overseas in places like New Zealand or Africa: one of those bullets through the vitals of a red stag, kudu, eland, or wildebeest will make for a very short tracking job.

Finally, this ammunition is very reasonably priced and has one of the lowest costs per round out of all the .300 Win Mag ammo on this list.

Hornady recently introduced their new Outfitter line of ammunition. Though it will also work quite well on a whitetail deer hunt in the back 40, the company markets this .300 Win Mag ammo for use on guided hunts in really tough environments like a moose hunt up in British Columbia or a kudu hunt in South Africa.

This ammunition is loaded with an extremely tough 180 grain GMX bullet that’s designed for controlled expansion, high weight retention, and deep penetration on large, heavy boned animals like elk and moose. This ammunition also uses nickel-plated case for reliable feeding and corrosion resistance under the most demanding conditions

With all those things in mind, it’s easy to see why Hornady advertises their Outfitter .300 Win Mag ammo for use on a big hunt that’s the culmination of years of saving and planning. After all, when the chips are down on the hunt of a lifetime, the absolute last thing you need is for your ammo to fail at the moment of truth.

The GMX bullet used in Hornady Outfitter ammunition is lead free, which makes this ammo another good choice for use in states like California.

Winchester’s Deer Season XP line of ammunition is another good choice choice if you’re planning on taking your .300 Win Mag deer hunting. The Extreme Point bullet this rifle ammo uses is similar to Winchester’s Power Point bullet, but the Extreme Point has a large diameter polymer tip that’s specifically designed to produce a gigantic wound channel along with massive impact trauma. This normally results in a very short tracking job and a very easy to follow blood trail. Even so, it’s designed specifically to compete with popular whitetail deer hunting ammo like the Federal Fusion, Federal Power-Shok and Power Shok, Hornady American Whitetail, Remington Core-Lokt, and Winchester Super-X in terms of accuracy and reliability.

The Winchester Deer Season XP line is also competitively priced priced and has one of the lowest costs per round out of all the .300 Win Mag ammo on this list.

So, not only is this some very reasonably priced .300 Win Mag ammo, but it also has a very good reputation for producing a giant wound channel and minimizing the distance deer run after being hit. In fact, this Winchester ammo is one of my top recommended brands of 300 Win Mag ammo for whitetail deer hunting. That being said, I would NOT recommend using it for bigger game like elk or moose.

Scroll back to top
42shares