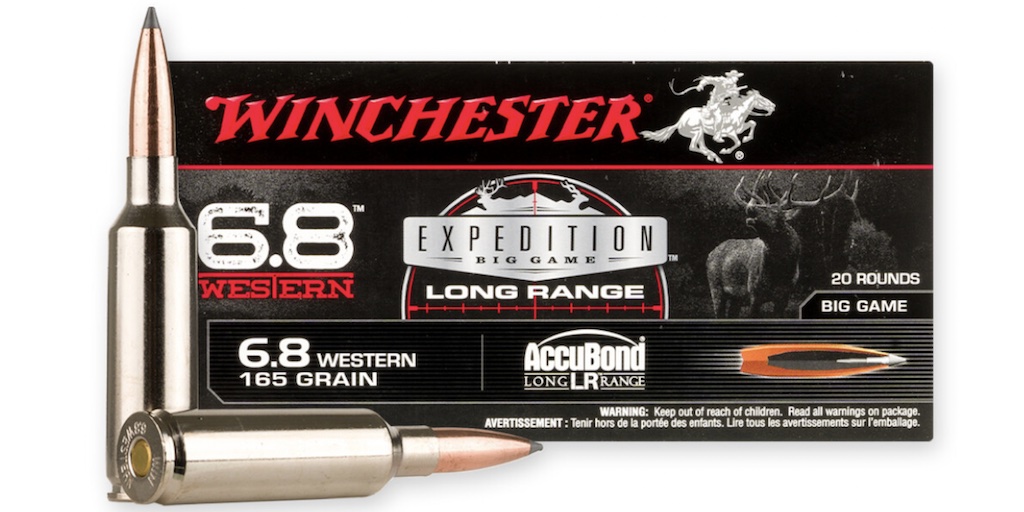 The new 6.8 Western cartridge has gained a great reputation for effectiveness on elk, deer, black bear, and other species of big game. Here are a few great brands of 6.8 Western ammo that will probably serve you very well next time you’re afield.

Released in 2021, the new 6.8 Western cartridge utilizes a fast rifling twist rate that allows for the use of very high ballistic coefficient and high sectional density .277″ bullets that excel on bigger game and at extended range. Even though it’s so new, the cartridge has really taken off with many hunters and Browning and Winchester now produce several different variants of 6.8 Western ammo for hunting elk, deer, moose, bear, and many other big game animals.

Also known as the 6.8 Winchester Western, the new 277-caliber cartridge is one of the first rifle cartridges in that bore diameter specifically designed to used extremely high BC bullets optimized for great performance at long distances. In fact, as good as the legendary 270 Winchester and 270 Weatherby Magnum both are, neither is really capable of using heavy bullets over 150 grains.

Since it’s optimized for use with 277 caliber bullets that have higher ballistic coefficients, the 6.8 Western has several advantages over the older cartridges and is an outstanding long-range hunting cartridge, especially for western big-game hunting.

Additionally, the 6.8 Western uses a modified 270 Winchester Short Magnum case and, with an overall length of just 2.955″ can fit magnum power into a short action rifle. Indeed, the 6.8 Western outperforms several loads used by popular magnum rifle cartridges like the 7mm Remington Magnum and the 300 Winchester Magnum.

Not only does the 6.8 Western fit in a short-action rifle (the 7mm Rem Mag and 300 Win Mag only fit in long action rifles), but the new rifle cartridge also has less recoil too boot!

Most importantly, while typical bullet weights for 270 Winchester are normally in the 130-150 grain range, the 6.8 Western can also use 150-grain bullets, but is bet suited for use with heavier 162 grain, 165 grain, 170 grain, and 175 grain bullets that are better suited for use on bigger game and at longer range.

Realize that different situations (like deer or pronghorn at long range vs moose at short range) necessitate the use of different kinds of 6.8 Western ammo for best results though.

Even though only Browning and Winchester make factory loads for the cartridge at this instant, there are several different 6.8 Western factory loads available that are well suited for a variety of big game hunting situations. So, regardless of whether you’re using a bolt action Browning X-Bolt, a Winchester XPR, or some other 6.8 Western hunting rifle, there is a good chance you’ll find what you need on the list below of the best 6.8 Western ammunition for hunting.

In today’s post, I’m going to show you the best 6.8 Western ammo for hunting elk, deer, feral hogs, black bears, moose and all sorts of other big game. I’ll also discuss the pros and cons of each individual load.

There are several great 6.8 Western loads, but I think Winchester’s Expedition Big Game Long Range line is the premier ammo offering for the 6.8 Western right now. This factory load is a collaboration between Winchester Ammunition and Nosler Inc. that’s loaded with a 165 grain Nosler AccuBond Long Range (ABLR) bullet. This ammunition offers great long range performance, but also uses a bullet that’s tough enough use with a short range shot on a big animal (like an elk).

The AccuBond Long Range is a great bullet that’s very aerodynamic and will still reliably expand at lower impact velocities. Nosler advertises that this bullet will still reliably open at velocities as low as 1,300fps (compared to 1,800fps for many other bullets). At the same time, this is a bonded bullet that’s designed to offer a mix of deep penetration, high weight retention, and controlled expansion.

With over 3,000 ft-lbs of muzzle energy shooting very tough, low-drag bullets, this load will also work great at almost any reasonable range from point blank out to several hundred yards on all manner of game ranging from thin-skinned animals like whitetail and mule deer or pronghorn all the way up to bigger and tougher game like black bear, elk, and even moose.

For those reasons, this Winchester ammo with a 165-grain Nosler AccuBond Long Range is my top recommended 6.8 Western ammo for elk, bear, pronghorn, and deer hunting.

Winchester originally developed their Copper Impact line of ammunition in parallel with their Deer Season XP line to provide some lead free ammo options for deer hunters. Those two ammo lines were well received by the hunting community. This eventually led to the expansion of the line to include lead free 6.8 Western ammo as well.

Just like the other loadings in that line, Winchester Copper Impact 6.8 ammunition uses a solid copper bullet design with a large diameter polymer tip that’s specifically designed to produce a gigantic wound channel along with massive impact trauma.

Additionally, this bullet will retain weight and penetrate extremely well since it is a monolithic design.

The end result is a bullet that expands rapidly, transfers a lot of energy to the animal for devastating terminal performance, and will still penetrate through thick hide, heavy muscles, and solid bone to reach the vitals of very large game from most reasonable shot angles.

The 6.8 Western loading also has a surprisingly high G1 BC of .564 for a lead free bullet. It does not quite have ballistics on par with some of the other 6.8 Western ammo options on this list, but it still performs extremely well and offers excellent performance at short range as well as for long-range shooting.

While this loading will indeed work great on deer-sized game, it’s not limited to just deer either and should work great for bigger and tougher game like black bear, elk, and even moose. For this reason, Winchester re-branded this ammo to drop the “Deer Season” moniker and just go with “Copper Impact” instead.

Finally, this ammo is a great choice for use in states like California. In fact, this is the only California legal 6.8 Western factory ammo option for those who do not handload at this instant.

All things considered, I think this is an outstanding 6.8 Western ammo for use on all manner of game under a very wide range of hunting situations.

These bullets are relatively soft, so they expand rapidly and deliver incredible shock upon impact. Ballistic SilverTip bullets also tend to shoot accurately in many different rifles. On the other hand, they don’t typically penetrate very well on really big, tough game.

Penetration shouldn’t be an issue with deer-sized game, but I do NOT recommend using Winchester Ballistic Silvertip 6.8 Western ammo for bigger game like elk or moose.

Instead, stick to game like whitetail deer, mule deer, and pronghorn with the 170 grain Ballistic SilverTip. You’ll probably be very happy with the results if you do that and this ammunition will work great for deer hunting with the 6.8 Western at short, medium, and even long range.

Browning’s Long Range Pro Hunter line was the other ammo offering initially rolled out for the 6.8 Western. Loaded with a 175 grain Sierra Tipped MatchKing, this ammunition actually doesn’t have quite as impressive ballistics on paper as the Winchester ABLR load. However, Sierra bullets are known for being very easy to shoot accurately at longer ranges. For this reason, many hunters really like the Tipped MatchKing bullet and this line should appeal to those individuals.

Even though this Browning load uses a heavier 175-grain bullet, I’d lean more towards the Winchester ABLR load for use on bigger game. This is because the Tipped MatchKing isn’t as robustly constructed as the ABLR. Hunters do successfully use those bullets on really big game like elk and moose with lots of success each year, but it’s just not something I personally feel comfortable with.

I do think this is an outstanding deer and pronghorn bullet though.

For those reasons, I recommend this Browning 6.8 Western ammo for those who like Sierra bullets in general, especially for hunting thin-skinned game like mule deer, whitetail deer, and pronghorn.

If you have a 6.8 Western rifle you really like and don’t want to use your expensive elk loads for deer hunting, then this Super X ammo is a good alternative. It’s not flashy or trendy, but this Winchester Super X loading with a 170-grain bullet is definitely great 6.8 Western ammo for deer hunting.

These bullets are pretty soft and tend to expand very well at ranges inside 300 yards. Additionally, since this loading uses heavier bullets with a higher sectional density, it also tends to penetrate well and you’ll very likely get an exit wound from a deer regardless of the shooting angle with this bullet.

While I think this is outstanding deer hunting ammunition, I do not recommend using Winchester Super X ammo for hunting bigger game like black bear, elk, or moose with a 6.8 Western. Instead, stick to medium game like feral hogs and deer with this ammunition and you should have outstanding results.

In addition to being very effective, this ammunition has one of the lowest costs per round out of all 6.8 Western ammo on this list. So, it’s tough to go wrong if you want some great 6.8 Western ammo for deer hunting. Place your shot where it needs to go and no deer will run very far afterwards.

Also Available at: Brownell’s and Cabela’s