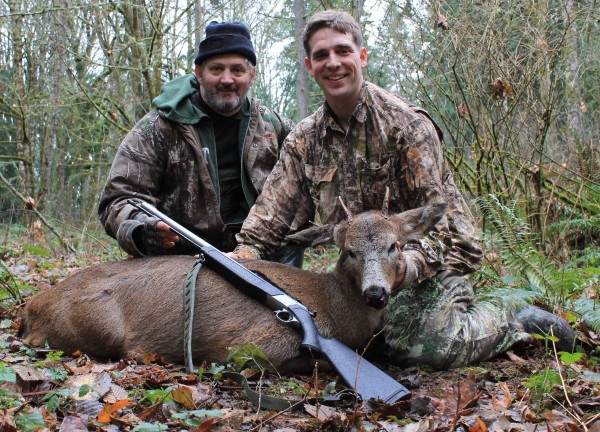 Keep reading to learn the story about how I got my first blacktail deer.

Blacktail deer are some of the toughest deer to hunt in North America. They inhabit thick forests in western California, Oregon, Washington, and British Columbia where visibility is often very short and hunting season nearly always coincides with bad weather. I got a firsthand lesson in just how difficult these elusive deer are to hunt when I spent the first week of the Washington late muzzleloader season hunting blacktail deer. With a little bit of help and some endurance, it all worked out and I managed to bag my first blacktail deer.

Due to work commitments, 2014 was the first full year that I had to devote to hunting since I moved to Washington. Since I wanted to hunt during a season that was less crowded in the woods, I decided to hunt with a muzzleloader. For this reason, I purchased a CVA Wolf Northwest muzzleloader and used a 290gr Barnes T-EZ bullet propelled by Hodgon’s Triple Se7en, all of which meet the legal requirements for use in Washington state.

My hunt started the day after Thanksgiving, which was the first day of the late muzzleloader season in that Game Management Unit in Washington. Unfortunately, it rained like crazy, which is not unusual for that time of year.

I was very careful to try and keep my muzzleloader under my rain gear at all times, but I was pretty worried that I would somehow get the powder wet and the gun wouldn’t go off when I needed it to. In Washington, the ignition system of a muzzleloader must be exposed to the weather, so getting the powder wet is a definite possibility in rough weather. Every night at home I would carefully unload and clean my muzzleloader to ensure that I had a fresh load for the next day.

Along with the heavy rain came heavy winds, so most of the deer were holding tight and not moving around much. I was seeing a few deer on the trail cameras at night, but not much was happening during the day. However, I couldn’t change the weather and the only thing I could do is continue to hunt hard and make sure I was in the woods when the deer finally started moving again.

On the third day of the hunt the rain turned into snow and the temperature started to drop. On days four and five the low was around 15-16°F and did not get above freezing either day. This is extremely cold weather for that part of Washington and I froze my tail off during 12 hour sits in the deer blind on those days.

I was hunting out of ground blinds set up overlooking bait piles of apples, cracked corn, and ivy near commonly used deer trails. By day five, one of the bait piles had not gotten any action at all, but a doe and a spike were starting to hit the other one. Figuring that anything was better than nothing, I decided to hunt out of the blind in this area.

After sitting out there all morning and nearly freezing to death, I went to get some lunch and warm up. When I returned and hour or so later, it was obvious that something had been eating there while I was gone. Frustrated, I hunted there for the rest of the day without seeing anything.

I returned there the next morning to try my luck again. Luckily, temperatures were starting to warm up and weather conditions were starting to return to normal, so I hoped our luck would change with the weather. However, after a couple of hours, I still hadn’t seen anything at all.

Then, out of nowhere I heard a crunching sound amplified by the Howard Leight electronic ear muffs I was wearing as ear protection. To my astonishment, a spike buck had appeared out of nowhere at the bait pile and was munching away on the apples. Ever so slowly, I raised my muzzleloader and took careful aim. He was only about 25 yards away, but I did not want to blow the shot, especially considering how much I had been through to get this opportunity. The spike was facing directly towards me, so I waited for him to turn and present me with a better shot. After a few seconds, he turned and presented me with a quartering shot.

I aimed just in front of the point of his right shoulder and when he put his head down to take another bite of apples, I squeezed the trigger. To my relief, the woods echoed with the deep report of the muzzleloader and I was immediately enveloped in smoke as the wind blew the thick white smoke back towards me.

He took off after the shot and ran about 30 yards to the edge of the clearing and then stopped. He stood there for a few seconds, unsteady on his feet, then reared up on his hind legs and fell over. I had finally gotten my first blacktail deer and my first big game animal with a muzzleloader!

Even though he was just a young spike and, at 110 pounds live, he was not a giant deer by any stretch of the imagination, that is one of the toughest hunts I’ve ever been on. It seems like hunts like that, regardless of the size of the trophy at the end, are the ones that you remember the best and I’m sure that I’ll look back on this hunt fondly many years from now. I’ve said it before and I’ll say it again: there is no feeling like the first time and just like another cold day in December many years ago, I took another step further into the world of big game hunting that day I got my first blacktail deer.