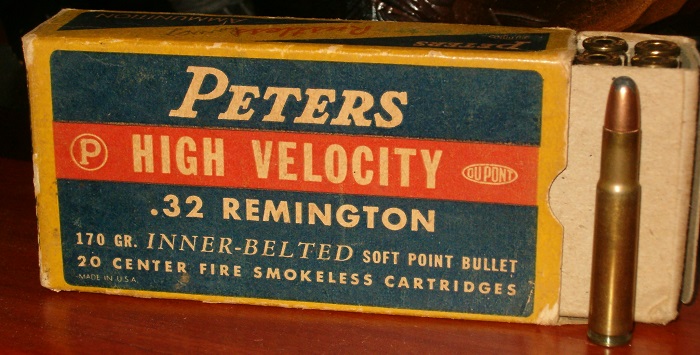 Keep reading to learn about the history and recommended uses of the .32 Remington.

Introduced by Remington in 1906, the .32 Remington was marketed as an alternative to the .32 Winchester Special. Hunters seeking a good bullet for hunting deer and bear that could be found in an auto-loading rifle were presented with a nice choice in the .32 Remington. Unfortunately, the cartridge never really caught on with the shooting and hunting public and has since fallen out of favor. Though it is a nice choice for hunting under certain circumstances, the cartridge is now rarely found outside of old gun collections or the collections of people who specifically look for rare and obsolete cartridges like the .32 Remington.

Since Winchester pretty much had the lever-action rifle locked down with the venerable Model 1894, Remington decided to produce rifles chambered in roughly comparable cartridges that were either auto-loading (Model 8 & Model 81) or pump-action (Model 14 & Model 141). Among several other cartridges, all of these rifles were chambered in .32 Remington in an effort to stake out a portion of the market of hunters and shooters who wanted a medium bore auto-loading or pump-action rifle.

Though the .32 Remington is a decent cartridge and is quite capable of taking a wide variety of game under the right circumstances, it never was very popular. In fact, of all the cartridges introduced by Remington along with the Model 8 rifle, only the .35 Remington is still in regular production today. For one reason or another, all of its sister cartridges have gone by the wayside over the years and fallen out of use in the general hunting public.

As stated earlier, the .32 Remington is no longer in regular production by any major ammunition manufacturer. It is possible to occasionally find loaded ammunition at gun shows and on the internet, but the supply of factory loaded ammunition for the cartridge is sporadic at best. When it is available, it is usually pretty expensive. The most common load is still a 170gr soft point traveling between 2,000 and 2,200 feet per second.

If you have a rifle chambered in .32 Remington that you really want to shoot or hunt with, hand-loading is probably your best bet. There is still a fair amount of reloading data out there about the cartridge and .321 diameter bullets aren’t too difficult to obtain. Brass is occasionally available from major distributors and it is even possible to resize brass from a couple of other cartridges to the appropriate dimensions to work in a rifle chambered in .32 Remington.

When shot from a good rifle by a competent shooter, the .32 Remington can be a very accurate cartridge. Back when I still had it, I shot many groups around 1-2 MOA with my old Remington Model 8. That being said, one of the biggest shortcomings of the cartridge is its limited range. It fires bullets with a relatively low ballistic coefficient at a relatively slow velocity, which makes for a trajectory that is the opposite of flat. With this in mind, the maximum effective range for the .32 Remington is about 200 yards. However, for most shooters and conditions, 100-150 yards is probably more realistic.

Hunting With the .32 Remington

I can attest that with proper shot placement and when used at close range (where bullet drop is minimal), it is an absolutely deadly cartridge on medium sized big game. As long as the range is short enough, it can even be an ethical cartridge for hunting elk (though it wouldn’t be my first choice for elk hunting). Additionally, since it fires a moderately sized bullet at a moderate velocity, the .32 Remington does not produce large amounts of ruined, blood shot meat like high velocity cartridges do.

Though it has largely fallen into disuse by most of the American hunting community, the .32 Remington can still be a great cartridge for hunting deer and other big game. As long as you can get enough ammunition (often easier said than done) and take only shots at close range, the deer and feral hogs in the area should be very wary of a hunter armed with an old Remington Model 8 or 14 chambered in .32 Remington.

Ballistic information on the .32 Remington was obtained from Chuck Hawks.

NEXT: THE .30-30 WINCHESTER: STILL RELEVANT A CENTURY LATER