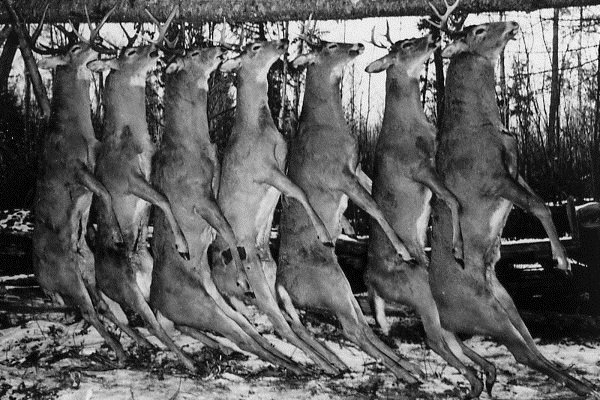 Check out this article on how to properly adjust your hunting expectations.

In this age of social media and hunting television shows, many new hunters have some pretty unrealistic expectations of how successful they will be during their first few hunting seasons. While there is nothing wrong with having high hopes, many of these new hunters end up discouraged and frustrated because they did not shoot a monster buck (or anything at all) in their first couple of hunting seasons.  With this in mind, here is how to properly adjust your hunting expectations to avoid experiencing disappointment from failing to achieve an unrealistic goal.

Forget What You See On TV

Unfortunately, shooting a doe or a nice, but “non-trophy” buck, does not drive television ratings. As a result, those events are rarely shown on TV, even though those are the deer that most hunters shoot each year.

The first thing to keep in mind when watching hunting shows on TV is to realize that virtually every TV hunt has multiple advantages not available to the average hunter. Many (though not all) of the hunts are guided and occur on private land or public land that is extremely difficult to access. Some of these hunts are filmed on high fenced properties and sometimes involve captive bred animals.

Though this certainly does not apply to all hunting TV shows, it certainly applies to some of them. Even if the show does not involve a high fence or guided hunt, you should still keep in mind that everyone involved with the hunt is probably working hard to put their best foot forward for the camera. The unfortunate truth is that even if you go on a guided hunt, there are still plenty of outfitters that will not put as much effort to get you a big trophy as they would for a hunt that will be broadcast on television. Also, keep in mind that a grueling two week hunt looks much easier and simpler when edited to fit a 30 minute television time slot.

I really began to understand how some hunting TV shows have warped our view of hunting when I was watching a show where the hunter apologized for shooting a deer that would “only” score 140. Though this particular TV personality turned his nose up at this deer (and remarked at how he had shot 12 other deer that were bigger), many hunters in the United States (especially those hunting on public land) may never even see, let alone shoot, a deer that scores 140. For those hunters, myself included, a 140″ buck would truly be the deer of a lifetime.

Now I’m not trying to trash hunting TV shows or telling you not to watch them. What I am saying is that you should never feel bad about shooting an animal that fails to measure up to something you saw on TV.

Okay, so you realize that the animals that you see on hunting TV shows are probably bigger than most people can expect to shoot. So what is a reasonable expectation for you on your hunt? Luckily, the internet is an amazing resource for finding information on harvest statistics.

Though every state is different, many of them have web sites where they display harvest reports and statistics from previous hunting seasons. For instance, Washington (where I live), does a good job of showing all of the harvest statistics for the various Game Management Units after each hunting season.

Studying those statistics really threw some cold water on my expectations the first year I hunted Washington: only 36% of hunters in the GMU I would be hunting shot a deer (and that was one of the higher success rates in the state as a whole). Further, of the 540 bucks taken in that GMU, only 47 (~8%) had 4 or more points on one side. By studying these statistics, I significantly adjusted my expectations for the hunting season in general.

What do you do if you happen to live in a state that does not do a good job of reporting harvest statistics for each hunting season? My advice would be to try and “pick the brain” of some more experienced hunters in that area. Internet hunting forums are a great resource for this. Another way to get information to to talk to game wardens or people at sporting goods stores.

Though many hunters will be hesitant to divulge their “honey holes”, they will likely be very helpful in helping you develop realistic expectations for hunting in a particular area. Not only can these other hunters assist you in adjusting your expectations during hunting season, their advice may help point you to other hunting areas that you hadn’t considered previously. Also, you never know: asking the right questions may help you build a relationship with a more experienced hunter who may turn into a fantastic hunting mentor.

The unfortunate truth is that learning to hunt can be very difficult for those that are inexperienced and do not have access to private hunting land or a good mentor to teach them the finer points of hunting. Some hunters may hunt for 2-3 seasons (or more) before shooting their first big game animal. It may take many more years to shoot a big game animal that really scores well, though some hunters never accomplish this feat during their entire life.

Because of this, it is extremely important to properly adjust your hunting expectations. If you consider a season a failure because you didn’t shoot a big deer, then you will spend a lot of time disappointed. Instead, focus on more achievable goals and gradually make them more difficult to achieve as you become a more experienced hunter.

1 thought on “How To Properly Adjust Your Hunting Expectations”