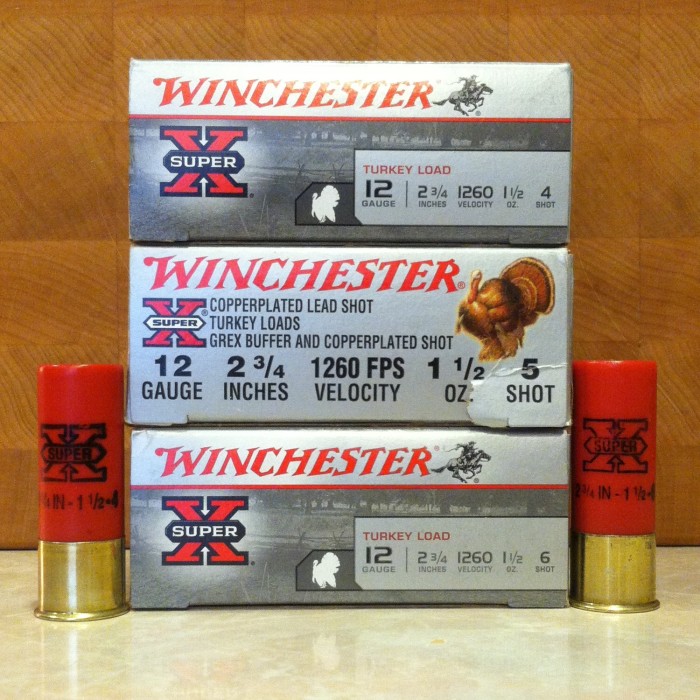 As I mentioned in my previous article, I’m in the process of preparing for an upcoming turkey hunt during Memorial Day weekend. Since my Remington Model 1100 shotgun originally had a barrel with a fixed improved choke, I recently purchased a new barrel that came with interchangeable improved, modified, and full choke tubes (which are useful shotgun accessories) for this hunt. Last Sunday, I went to the range and patterned my shotgun using the new barrel with several different types of turkey loads in order to determine which produced the best pattern for me to use on the turkey hunt.

To learn more about the naming conventions of shotguns as well as what that information above means, check out the article below:

Prior to the testing, I cut open one shell containing each size of turkey shot and counted the pellets inside. The shells contained 191, 269, and 376 copper plated pellets of #4, 5, and 6 shot respectively. Additionally, I noticed that all of the pellets were indeed buffered with ample amounts of plastic “grex” granules to minimize deformation during firing.

Though I was disappointed by the performance of the #4 shot, I was not really surprised. Since I was only using 1 ½ oz loads, I was not throwing a tremendous amount of shot at the target. The #4 load has approximately half the number of pellets as the #6 load, which made for a relatively thin pattern with lots of voids at 35 yards. Had I been using a 2 oz, 3″ load, the additional 60-70 pellets certainly would have come in handy and probably produced a better pattern. Correspondingly, the #5 and #6 loads both did much better and put significantly more pellets into the vitals of the turkey. While their pattern was not textbook perfect, it was certainly more evenly distributed than the pattern made by the #4 shot.

For whatever reason, my shotgun seemed to like the #5 shot loads a little better than the #6 loads. Even though they put approximately the same number of pellets into the vitals of the turkey, the #5 shot loads placed a higher percentage of pellets into the vitals and had a more evenly distributed pattern. That, plus the fact that the individual pellets are slightly larger and will therefore retain more energy at longer ranges and penetrate deeper also factored into my decision to go with the #5 shot load. I then checked the pattern of the #5 shot at 25 and 30 yards and obtained 37 and 24 hits respectively on the head and neck of the turkey. At both ranges, the load exhibited a pattern tight enough to ensure plenty of hits on the vitals, while at the same time open enough to provide a little leeway in the event that I pull my shot slightly to either side (as I did at 25 yards).

All in all, I was pleased by the performance of the loads in my shotgun, even though I wasn’t using a specialized shotgun with an extra full choke and 3″ or 3 1/2″ shells. The #5 load consistently hit were I was aiming and had a dense enough pattern to ethically kill a turkey at the ranges I shot at without excessive recoil. I feel confident that the #5 loads will perform satisfactorily out to 35 yards. While I don’t necessarily plan on using it at ranges past 35 yards at this point, I plan on going to the range again in the next couple of weeks to test the performance of that load at 40 and 45 yards, just in case a longer range shot presents itself on the hunt.