Put simply, a Paradox Gun is a shotgun with a partially rifled barrel that enables it to shoot both slugs and shot with reasonable accuracy.

Colonel G.V. Fosbery first developed what we now call the Paradox Gun back in the 1880s by adding a small amount of rifling to the choke on a shotgun. He quickly discovered that a couple of inches of rifling at the end of the barrel was enough to stabilize a single projectile (like a ball or modern day slug), yet still produced a good pattern with traditional shot loads.

The legendary British gun maker Holland & Holland bought the patent rights from Fosbery and started manufacturing and selling firearms using the marketing name Paradox Gun. Since the word “paradox” refers to a statement that contradicts itself, the name “Paradox Gun” stems from the fact that one of the defining characteristics of a shotgun is a smooth barrel, yet this particular shotgun has a partially rifled barrel.

Though Holland & Holland was the first company to produce Paradox Guns, other gun makers have also manufactured similar firearms since Colonel Fosbery first filed for his patent over a century ago. Hunters quickly developed an appreciation for the versatility of these guns have used Paradox Guns with great success on a wide variety of game all over the world (particularly in India, Africa, and Europe).

Why Use A Paradox Gun?

So why would a hunter want to use a Paradox Gun? Well, it’s primarily because the design combines the best attributes of both rifles and shotguns. Like a good shotgun, a Paradox Gun is normally lightweight, quick pointing, and produces an even pattern of shot. These attributes make it ideal for shooting moving game, like a flushing bird or other small game. At the same time, it is similar to a rifle because it can accurately shoot slugs. This allows hunters to take shots on game too big and/or too far away for buckshot or birdshot.

With this in mind, a hunter going afield could load one barrel with a slug and the other with shot in order to be prepared for an encounter with just about any type of wild game. This also simplifies the task of packing for a hunting trip by eliminating the need to carry both a rifle and a shotgun.

Since they enable hunters to shoot slugs with reasonable accuracy, Paradox Guns are also good for use in localities that do not permit hunting with high-velocity rifles. Additionally, hunters who live in areas that severely restrict gun ownership often like Paradox Guns because they combine the performance of a rifle and a shotgun in a single package. This means only going through the process of getting a license for a single gun. In that same vein, quite often shotguns are easier to obtain than rifles in places with strict gun control regulations, so the fact that a Paradox Gun is often legally classified as a shotgun is another bonus in that regard.

How Effective Is A Paradox Gun?

Are a number of different companies have produced many different varieties of Paradox Guns over the years, so accuracy will really vary from gun to gun. However, I recently got the chance to compare the performance of a Japanese Made SKB Model 505 shotgun with a partially rifled barrel to an off the shelf Remington Model 870. I shot both shotguns at a target 50 yards away using run of the mill Herter’s 3/4 ounce rifled 20 gauge slugs.

As you can see in the photos, the 870 shot a group approximately twice the size of the one from the Paradox Gun. All things considered, the 870 performed reasonably well, but the Paradox Gun was clearly the better choice for shooting slugs. 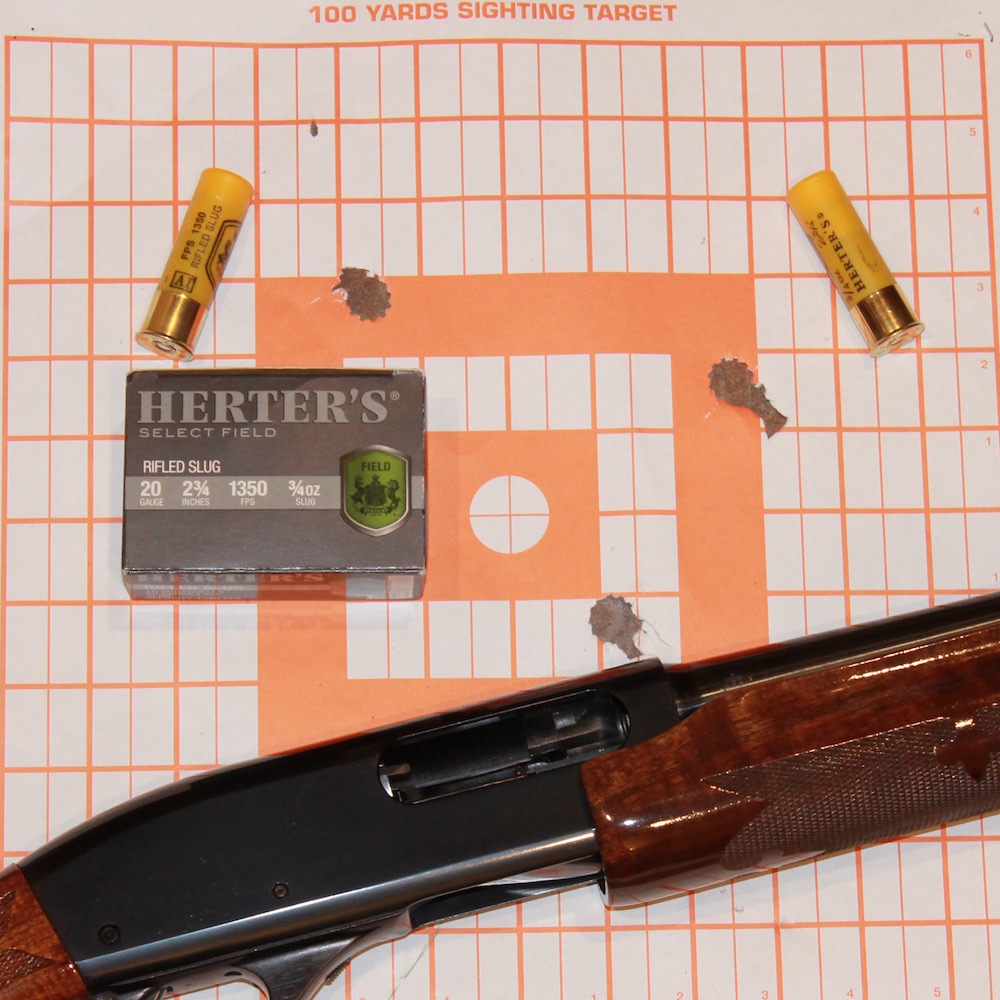 All things considered, those results aren’t really astonishing. After all, you’d expect any firearm with rifling to shoot slugs more accurately than a smoothbore firearm.

So, how’d the Paradox Gun perform when shooting birdshot? I shot some Remington #6 “Heavy Dove” loads out of that same SKB Model 505 shotgun at a target 20 yards away to find out. I was a little surprised to see that the shotgun actually produced a decent pattern with that load.

While that pattern is a little less dense than what I’d expect from a typical smoothbore shotgun, it’s still good enough for bird hunting. In case you were wondering, the big hole in the cardboard is where the wad hit the target.

Is a Paradox Gun an ideal firearm for every hunter? No.

As previously stated, it’s a firearm born of compromise. Just like any other time you make a compromise, you have to give up a little of one thing to get a little of something else.

In this case, the Paradox Gun sacrifices performance with shot in order to get better performance with slugs. Though a good quality Paradox Gun will be able to get the job done with both slugs and birdshot, it will never shoot slugs as accurately as a rifle or produce as consistent of a shot pattern as shotgun.

That being said, a good quality Paradox Gun is still a pretty darn nice choice for a hunter who wants to do as much as possible with a single firearm.

If you’d like to read a more detailed discussion on the different shotgun gauges and their recommended uses, read the article below:

The web site Classic Shooting was used as a reference for this article.

NEXT: BUCKSHOT vs SLUG: CHOOSING THE RIGHT HUNTING LOAD

NEXT: BEST HUNTING EAR PROTECTION FOR SPORTSMEN IN 2021
137 shares