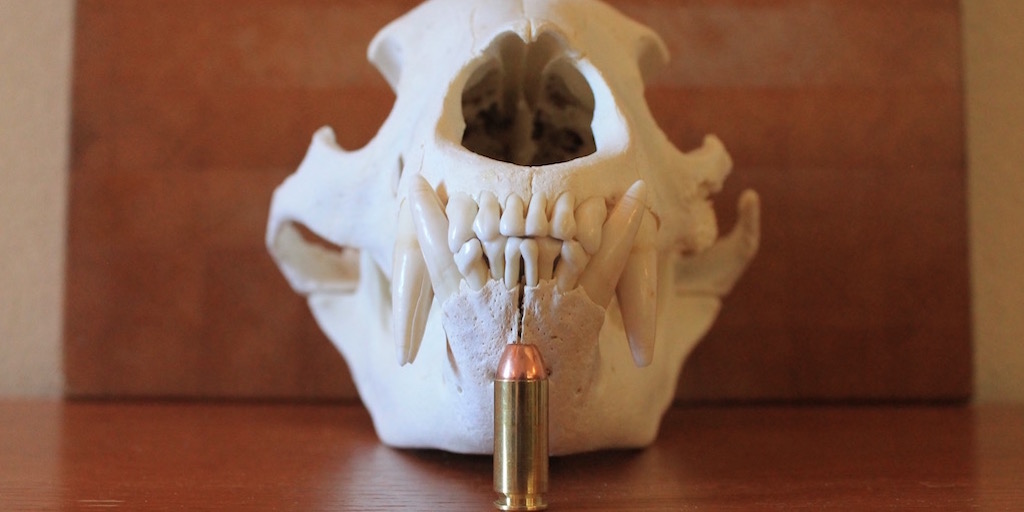 Though it experienced a series of dramatic changes in fortune during a relatively short time period, the 10mm Auto is making a comeback with many hunters and shooters.

If you’re new to the shooting community, then you could be forgiven for wondering what the big deal is with the 10mm Auto cartridge. It took the firearms world by storm in the 1980s due in part to its use in the TV series Miami Vice and the fact that the FBI briefly adopted it for their service pistols, before waning in popularity for a variety of reasons during the 1990s. However, the 10mm Automatic is starting to make a comeback, particularly with those who want a powerful semi-automatic handgun for hunting and self-defense.

In this post, I’m going give you a brief overview of the history, performance characteristics, and the best uses of the 10mm Automatic cartridge.

Whit Collins, John Adams, Irving Stone, and the renowned firearms writer and instructor Jeff Cooper worked with Norma AB to design the 10mm Automatic cartridge in 1983. They did this by cutting a .30 Remington case down and loading it with .40 caliber bullets from the .38-40 Winchester. Their goal was to create the preeminent combat handgun cartridge that fired a heavier and larger caliber bullet than the 9mm Luger at a higher velocity than the .45 ACP.

They came very close to accomplishing that objective. The original 10mm Auto load shot a 200 grain bullet at 1,200 feet per second for 640 ft-lbs of muzzle energy, which was a significant step up in performance compared to the 9mm Luger and the .45 ACP. Dornaus & Dixon Enterprises worked in parallel with Jeff Cooper and the rest of the 10mm Auto team to build a handgun designed specifically to shoot the new cartridge: the Bren Ten pistol.

Similar in appearance to the CZ-75, Sonny Crockett in the television show Miami Vice helped make the Bren Ten famous. For this reason, demand for the pistol and the cartridge exploded in the mid-1980s. Unfortunately, the Bren Ten was rushed into production and the pistol’s reputation suffered due early issues with reliability, quality control, and a shortage of magazines. The company was never quite able to regain its footing after those initial missteps and declared bankruptcy in 1986.

The demise of Dornaus & Dixon and the Bren Ten nearly spelled the end of the 10mm Auto. However, the 10mm Automatic caught the eye of some designers at Colt. Shortly after the passing of the Bren Ten, Colt rolled out a Model 1911 modified to use the cartridge that they named the Delta Elite.

It was also around this time that the 10mm Auto gained the interest of FBI during their search for a more powerful service round in the aftermath of the disastrous 1986 shootout with two bank robbers in Miami.

Though the FBI was impressed with the performance of it during their evaluation and briefly used the cartridge in the Smith & Wesson Model 1076 handgun, the bureau ultimately decided the full power 10mm load produced more recoil than most agents could handle. Indeed, the FBI test report on the cartridge was apparently labeled:

As a result, the FBI decided to adopt a reduced power 10mm Auto load. Known as the 10mm FBI or 10mm Lite, this load was several hundred feet per second slower than the original 10mm Auto, but the FBI was still satisfied with its penetration and terminal performance. Smith & Wesson later discovered it could achieve the same performance specifications by shortening the 10mm case by several millimeters so it would fit into a medium-frame handgun.

They named the resulting cartridge the .40 Smith & Wesson, (also known as the .40 S&W). While .40 S&W was relatively popular among law enforcement agencies and ended up supplanting the 10mm Auto in most cases, fans of the 10mm Auto still scornfully refer to the .40 S&W as the .40 Short & Weak.

Even though most police departments ended up passing on the 10mm Auto, the cartridge has steadily grown in popularity among hunters in recent years. Today, it’s probably the most popular semi-auto hunting cartridge in the United States and it also has a dedicated following among those who use it for self-defense against both 2 and 4 legged predators.

Performance of each 10mm Auto load will vary from gun to gun depending on barrel length. However, a lot of manufacturers produce 10mm Auto ammo closer to 10mm FBI specifications than to the original 10mm load of a 200gr bullet at 1,200fps.

For example, Hornady advertises a muzzle velocity of 1,275fps for their 10mm 180gr XTP bullets. With 650 ft-lbs of kinetic energy at the muzzle, this is pretty run of the mill performance for the cartridge.

However, there are plenty of hotter 10mm Auto loads out there.

When compared to most other handgun cartridges, all of these 10mm Auto loads are relatively flat shooting. It’s also a pretty darn accurate cartridge and a skilled marksman should be able to consistently hit targets out past 100 yards.

Yes, the 10mm Auto has somewhat stout recoil, but it’s still manageable for experienced shooters. This is particularly true when shooting many of the long slide 10mm Auto handguns currently in production.

While the Bren Ten went by the wayside just a couple years after it was introduced, Glock gave the cartridge something of a new lease on life when the company rolled out the Glock 20 in 1991. Since then, a number of other companies have started manufacturing handguns chambered in 10mm Auto. In addition to the Glock 20, hunters and shooters interested in purchasing a 10mm Auto pistol these days can choose between guns like the Sig P220, the Dan Wesson Razorback, the EAA Witness, the Nighthawk Long Slide, the Ultra FS HC by Rock Island Armory, the Wilson Combat CQB, and the Kimber Super Eclipse.

Colt restarted production of the Delta Elite in 2009 and still makes limited numbers of the handgun each year.

Additionally, Glock followed up their success with the Glock 20 by introducing the Glock 40 in 2015. With a long, 6″ barrel and Glock’s “Modular Optic System”, the Glock 40 was designed to really allow hunters and shooters to wring every last bit of performance out of the 10mm Automatic cartridge.

Hunting With The 10mm Auto

One of the reasons why the 10mm Auto has made something of a comeback recently is because hunters have discovered how effective the cartridge is on medium-sized game like deer and hogs. While we can debate the wisdom of using the cartridge on larger game, the fact remains that a number of hunters have also cleanly taken black bear and elk with it as well.

With more energy remaining at 100 yards than most .45 ACP loads have at the muzzle, the 10mm Auto is clearly the more powerful cartridge. Numerous reports from hunters back up the advantage the 10mm Auto has on paper with stories of 10mm bullets penetrating deeper and producing larger wound channels that result in shorter tracking jobs when compared to the .45 ACP. The .45 ACP also has a much more arching trajectory and drops literally twice as far as the 10mm Auto at 50 and 100 yards

Indeed, the body of evidence indicates that 10mm Automatic is clearly superior to the .45 ACP and .357 Magnum for hunting. Even so, it’s still in a tier below more powerful cartridges like the .41 Magnum as you can see in the table below comparing Hornady .357 Magnum, 10mm Automatic, .41 Magnum, and .45 ACP factory loads.

Now, there’s nothing magic about 10mm Automatic and it’s nowhere near as powerful as the common centerfire rifle hunting cartridges or even some of the larger magnum revolver cartridges. That being said, it’s still more than powerful enough to get the job done in many hunting situations provided good quality bullets are used, shots are placed appropriately, and the hunter keeps the limitations of the cartridge in mind.

All things considered, the 10mm Automatic is a really good all around hunting cartridge: it’s accurate, hard hitting, flat shooting, and has manageable recoil. It’s also available in a 1911 frame, which is another a big plus for some people. So, if you want a really solid hunting cartridge to use in a semi-automatic pistol, then the 10mm Auto is perfect for you.

Using The 10mm Auto For Self-Defense

So, what about using the 10mm Auto for self-defense?

Jeff Cooper was trying to design the ideal combat handgun cartridge and was largely successful in that regard with the 10mm Automatic. When you consider the fact that shooters now have better quality handguns and ammunition than they did in the 1980s, the cartridge looks better than ever for self-defense.

In short, if you’re up to the task as a shooter, the 10mm Automatic is a very effective self-defense cartridge against 2 legged predators. After all, the reasons the FBI eventually moved away from the 10mm Auto had more to do with the difficulty some guns and special agents had handling it than with any shortcomings in the effectiveness of the cartridge itself.

With a few exceptions (like the Glock 29), most of the popular 10mm Auto handguns are pretty large, which makes using it for concealed carry more difficult. That’s not necessarily a deal breaker, but it’s certainly something to keep in mind. On the other hand, concealment is probably much less of a concern if you plan on using it for home defense or as a back-up when hunting.

It will also work in a pinch against most 4 legged predators. Those hot Double Tap and Buffalo Bore 10mm loads are strong medicine for black bears, but many still consider them a little on light side (though better than nothing) for defense against brown and grizzly bears.

As in all things, shot placement is key, but your margin for error is just a little smaller with the 10mm Auto than with a .44 Magnum or .454 Casull.

If you plan on using the 10mm Auto for any task, be it hunting, home defense, or insurance against bears, make sure you can use it effectively. Buy a good quality handgun, use premium ammunition, and practice regularly. As long as you hold up your end of the deal, then the 10mm Auto will very likely serve you well.