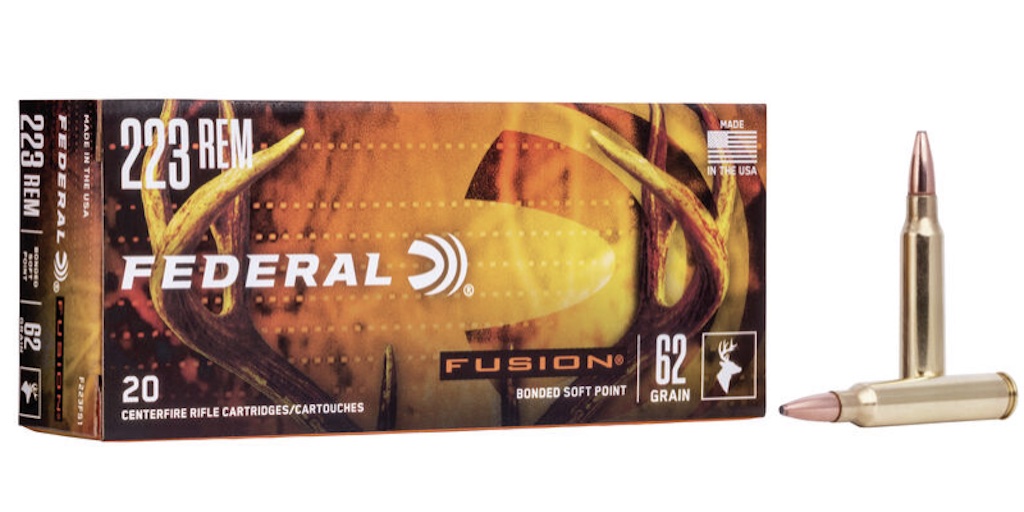 While using the little 223 for deer hunting is a controversial topic, the cartridge can be effective on deer under the right conditions. Indeed, many hunters use the 223 for hunting deer, feral hogs, and other big game with excellent results. Here are a few great brands of 223 ammo that will probably serve you very well next time you’re afield.

Originally designed for the AR-15 and the M-16 assault rifle, the 223 Remington rifle cartridge is one of the most popular centerfire cartridges in the world today. Not surprisingly, many companies like Barnes, Browning, Federal Premium, Herter’s, Hornady, Prvi Partizan, Remington, and Winchester produce several different variants of 223 ammo for hunting deer, feral hogs, and other big game animals.

The cartridge is most commonly used afield for varmint and predator hunting, but the cartridge will work on bigger game too.

Can you use the 223 for deer hunting?

Absolutely! As long as it’s legal for deer hunting in your area (and it is in the majority of the United States), the 223 Remington can be extremely effective on deer sized game. Hunters should keep their shooting distances short and be careful with shot placement. Using the right 223 ammo is vitally important as well.

It will darn sure work for the job in the right hands, but you need to keep a few things in mind before you god deer hunting with your 223 Remington.

Fortunately, there are several excellent choices for factory 223 hunting ammo from a couple different manufacturers.

Next, the most effective 223 Remington loads for deer hunting utilize tougher bullets that retain their weight really well and will penetrate deep enough to reach the vital organs of a deer from most shot angles. Copper or copper alloy bullets are great choices here. Same goes for bonded bullets and the Nosler Partition.

However, those bullets need lots of velocity for optimum expansion. This is especially true for the copper bullets. All other things being equal, lighter bullets will have a higher velocity and a flatter trajectory.

With that in mind, keep your shooting distances on deer short as velocity decreases at longer range. The 223 Remington is not a good long range deer hunting cartridge. Ideally, you should only take shots on deer sized game under 100 yards.

Finally, you need to be extremely careful with your shot placement. Remember: the 223 Remington uses a 22 caliber bullet (.224″ to be exact). So, the 223 Remington is definitely on the light side for deer and you do not have a giant margin for error with those smaller bullets.

Luckily, no deer will go far at all if you put a quality bullet through the vitals.

So, regardless of whether you’re using a bolt action Ruger American Ranch, a Browning X-Bolt, a Ruger Mini Fourteen, a variant of the AR-15 rifle, or one of the many other 223 Remington rifles in production, there is pretty much guaranteed to be something for everyone on the list below of the best 223 ammunition for hunting.

In today’s post, I’m going to show you the best 223 ammo for hunting deer, feral hogs, and other big game and I’ll also go over the pros and cons of each individual load.

Before we get started, I have a couple of administrative notes for you.

First, though the .223 Remington and the 5.56x45mm NATO are technically different cartridges, the practical difference in performance between the .223 vs 5.56 is very small and doesn’t make any difference for the purposes of this article. Use extreme caution when attempting to interchange the .223 Remington and higher pressure 5.56x45mm NATO cartridges though.

Next, some of the links below are affiliate links. This means I will earn a small commission (at no extra cost to you) if you make a purchase of rifle, handgun, rimfire, or shotgun ammunition through those links. This helps support the blog and allows me to continue to create free content that’s useful to hunters like yourself. Thanks for your support.

The Nosler Partition is a very old bullet design, but it remains one of the best hunting bullets around and has a proven track record over the course of many decades. These bullets are also known for great accuracy in most rifles.

Originally designed back in the 1940s by John Nosler after he experienced dismal performance on a big bull moose in Canada with the simple cup and core bullets available at the time, the Nosler Partition is not a bonded bullet.

However, it uses a clever and somewhat unique design consisting of two separate lead cores with a solid divider between them. The front core is designed to deform and expand to deliver a big mushroom and lots of tissue destruction. On the other hand, the rear core is designed to remain intact and continue to penetrate to deliver a deep wound channel and hopefully a bullet exit.

Controlled expansion and deep penetration are both essential attributes for good performance on deer sized game from lightweight, small caliber, and high velocity bullets like those from the 223 Remington. Fortunately, the Nosler Partition delivers those things in spades and one of these Partition bullets through the vitals of a deer or feral hog will probably make for a very short tracking job.

As is the case with the other chamberings in the VOR-TX line, Barnes VOR-TX 223 ammo is designed for rapid expansion, high weight retention, and deep penetration. Really tough bullets like these fired at a very high velocity are deadly on deer.

So, this is excellent 223 ammunition for hunting deer, hogs, and similar sized game.

These hollow points are also lead free, which makes it another great option for use in states like California that that don’t permit the use of lead bullets.

Barnes VOR-TX ammo will deliver terminal performance similar to the Hornady or Nosler ammo also discussed in this article. Some rifles prefer certain brands, so this is definitely worth checking out if your rifle doesn’t function reliably or shoot accurately with the CX or E-Tip bullets. If the Barnes ammo works better for you, then you can’t go wrong with Barnes 223 ammo for deer hunting. It will also work well for home defense.

Available using 55 grain E-Tip bullets, this is a good option for hunting just about any species of game you’d reasonably pursue with the 223 Remington cartridge. Specifically, this is an excellent choice of 223 ammo for deer and feral hogs.

This 55 grain E-Tip is one of the more aerodynamic 223 bullet options. Since it also has a pretty fast muzzle velocity, this is a 223 ammo option with a pretty flat trajectory and slightly longer effective range. Don’t get carried away though: this load is still most effective at ranges inside 150 yards on deer sized game.

This ammunition is also lead free, which makes it the best ammo in 223 Remington for use in states like California that that don’t permit the use of lead bullets.

I’m a big fan of the Nosler E-Tip line in general and cannot recommend this stuff highly enough. It is available at a higher price than ammo using lead core bullets, but I think it’s worth it and this would be my first choice if I wanted a single 223 hunting ammunition load for hunting the widest possible variety of game.

The best deer hunting loads for the .223 Remington typically use bonded bullets or some sort of lead free pure copper or copper alloy bullets. There are two loads from Winchester that are exceptions: the 64gr Winchester Deer Season XP and the 64gr Winchester Power Point (which is next).

Both are lead core bullets and neither is bonded, but both are very heavy for caliber loads that will work well for deer hunting if used appropriately.

While a broadside shot on a deer with this round might result in an exit, that’s less likely with quartering shots.

The Winchester Deer Season XP line is also competitively priced and has one of the lowest costs per round out of all the 223 Remington ammo on this list. It’s a great choice for whitetail deer, mule deer, blacktail deer, and even pronghorn.

It’s not flashy or trendy, but this Winchester Super X loading with a 64-grain soft point bullet is also great 223 ammo for deer hunting. Not only is it very effective, but this ammunition is also normally available at competitive prices.

In fact, this is normally the least expensive 223 deer hunting ammo available and costs even less than Winchester Deer Season XP ammo.

While they don’t have a large polymer tip, Winchester Power Points are still pretty soft and tend to expand very well at ranges inside 200 yards. So, terminal performance is devastating in soft tissue at close range. This is one of the reasons why that ammo is so popular with deer hunters.

Be careful with your shooting angles (broadside or slightly quartering shots are best), but you should have outstanding results if you use this ammo for medium game like feral hogs and white tail deer. Since this is a traditional cup and core bullet, I definitely recommend going with heavier bullets here and the 64 grain version of the Power Point is a better option than the 55-grain bullet in the same line.

Place your shot where it needs to go and no deer will run very far afterwards.

It’s not new or fancy, but Federal Fusion ammunition with a 62gr bullet is also excellent 223 ammo for deer hunting.

The end result is a 223 hunting load that will likely penetrate deep enough to reach the vitals on deer sized game at reasonable shot angles and at reasonable ranges while at the same time expanding enough to inflict massive tissue damage and a deep wound cavity for quick, ethical kills.

Federal also produces a separate, though very similar version of this load in their Fusion MSR line specifically designed to reliably function in Modern Sporting Rifles. For this reason, I think Fusion 223 ammo is arguably the best choice for deer or feral hog hunting, especially in a modern sporting rifle.

Finally, we have this Hornady Superformance load using the extremely tough 55 grain CX bullet. This bullet is designed for controlled expansion, high weight retention, and deep penetration. Those are all great attributes for any hunting bullet, but are especially important for lightweight, small caliber cartridges like the 223 Remington.

These bullets tend to mushroom very fast to a frontal diameter approximately twice the original bullet caliber. However, they’ll also retain nearly 100% of their weight, which is great for deep penetration.

Hornady’s Superformance line use special propellants and primers to deliver extremely high velocities. This is an absolutely deadly combination on deer sized game when combined with their new monolithic  CX bullet.

The CX bullet used in Hornady Superformance ammunition is also lead free, which makes this ammo another good choice for deer hunting in states like California. The CX bullet replaced the older GMX bullet from Hornady and is a tiny bit more aerodynamic, but retains the great terminal performance of the GMX.

All things considered, this is great 223 Remington ammo on deer sized game and you can’t go wrong with Hornady Superformance CX 223 ammo for deer hunting.