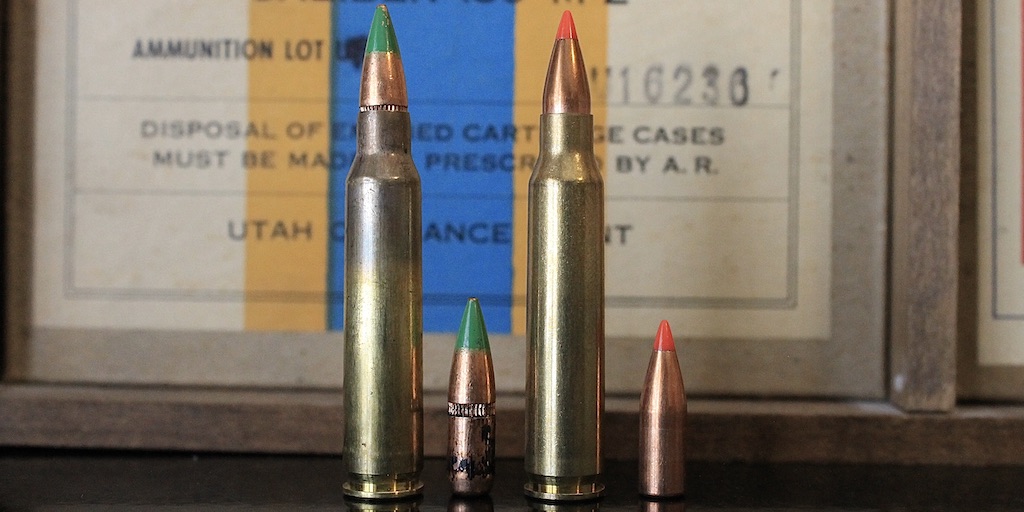 Are you trying to learn the difference between the .223 vs 5.56x45mm NATO cartridges so you can use the right ammunition for your AR-15? Here’s what you need to know about their similarities and differences.

Even though many people treat the .223 Remington and 5.56x45mm NATO cartridges as interchangeable rounds, this can be a dangerous practice under the wrong circumstances. It is true that the two cartridges are very similar to each other. However, there are some very subtle, yet important differences between the 223 vs 5.56mm cartridges that go far beyond the differences in their names.

There is also a bunch of misinformation out there pertaining to this exact subject. So today, I’ll go over some of the differences between the 5.56 vs 223 Remington cartridges and provide some practices to follow when using them.

As you can see in the photo below, .223 and 5.56mm rounds have virtually identical external case dimensions. This means that the majority of the time, it’s possible to chamber and fire .223 ammunition in a 5.56mm chamber and vice versa.

Making an apples to apples comparison of the authorized pressure of the two rounds is difficult because the .223 Remington cartridge is standardized by the Sporting Arms and Ammunition Manufacturers Institute (SAAMI) while the 5.56x45mm cartridge is not. However, 5.56x45mm ammunition is still recognized as being loaded to a higher pressure than the 55,000psi maximum average pressure standardized by SAAMI for the .223 Remington.

Correspondingly, 5.56mm firearms are designed and built to withstand the increased pressure, while .223 Remington chambers generally are not.

The chamber dimensions of rifles chambered for the two cartridges are slightly different as well.

Specifically, .223 Remington chambers are smaller overall and have a shorter leade or freebore (the distance between the case mouth of the cartridge and the point where the rifling engages the bullet) with a steeper angle than 5.56mm chambers. Generally speaking, a shorter leade results in increased accuracy at the expense of increased pressure and decreased velocity while a longer leade produces increased velocity with lower pressures at the expense of reduced accuracy.

The 5.56x45mm NATO cartridge was originally designed for the U.S. Military to use in the M-16 rifle. Indeed, the M-16A1, M-16A2, and M-4 rifles and carbines commonly used by the US Army and Marine Corps (as well as the other branches of the military) over the past few decades are all chambered in 5.56 NATO. However, the M-16A1 has a slower rifling twist rate than the other two since it was designed to use different bullet weights.

Due to the military roots of the cartridge, the 5.56mm NATO round was designed for use with a longer leade with a shallow angle. In addition to producing increased velocity and therefore better performance at long range, this also had the advantage of improving reliability by allowing more build up of carbon and other “gunk” without adversely affecting the function of the rifle.

Since, all other things being equal, a shorter leade results in higher chamber pressure when compared to a longer leade, this means that firing 5.56mm ammunition (which is already loaded to a higher pressure) out of a .223 Remington chamber can produce dangerous amounts of chamber pressure.

This brings us to our next point.

Can you shoot 5.56 in a 223 chamber? No. Do not shoot 5.56mm ammunition in a rifle with a .223 Remington chamber or you are risking a potentially dangerous incident.

If you fire 5.56mm ammo in a .223 chamber, you could potentially experience serious trouble from a pressure spike. The rifle probably won’t blow up, though it is possible.

More likely, the excess pressure levels will damage the rifle itself or blow the primer out of the primer pocket into the internal workings of the rifle. So, if you observe any signs of excess pressure (like blown, cratered, or flattened primers), stop shooting that ammunition in your rifle immediately.

To avoid this, ensure that you only fire the appropriate ammunition in your rifle.

First, find out if your rifle (or handgun) is a .223 Remington or 5.56mm NATO. On AR-15 rifles or carbines, look on the top of the barrel near the muzzle. On most other firearms (like bolt action rifles), look on the receiver or the side of the barrel near the chamber. If it says “.223 Remington,” then you can be pretty sure that is what you have.

Rifles like the Winchester XPR, Browning X Bolt, Ruger American Predator, and older versions of the Ruger Mini-14 (current production Mini-14s are chambered in 5.56) are chambered in .223 Remington.

However, if it says “5.56mm,” that does not necessarily mean you have a 5.56mm NATO chamber that’s safe to fire all variants of 5.56x45mm ammo out of. Unfortunately, not all 5.56mm chambers are created equal and the only way to be 100% sure is to either measure the throat size yourself or get a reputable gunsmith to do it for you. Until then, it is best to only fire .223 Remington ammunition in the rifle.

So how do you determine if a particular type of ammunition is .223 Remington or 5.56x45mm NATO?

Due to its roots as a military cartridge, there is a lot of surplus military ammunition in 5.56x45mm NATO on the market. If the ammunition is packaged as M193, M855, SS109 (or a variant of those like XM193 or XM855), it is definitely 5.56mm. If you don’t have access to the packaging, or it doesn’t say, look at the headstamp on the base of the bullet.

If the headstamp says “5.56x45mm” or is 2-3 letters and 2-3 numbers (such as “LC 13” on the left in the photo below), and/or has a cross inside a circle (which indicates it meets NATO mil-spec requirements), then it is military surplus full metal jacket (FMJ) 5.56mm NATO ammo.

If the headstamp says something like “Hornady 223 Rem,” like the cartridge on the right above, then it is a .223 Remington round. Likewise, hunting and self-defense ammunition made by civilian ammunition manufacturers like Winchester’s Super-X, Hornady’s Varmint Express, and Nosler’s Varmageddon product lines are usually (though not always) made to .223 SAAMI specifications.

If you are still not sure after looking at the headstamp, treat the ammunition as 5.56mm just to be on the safe side.

If you’re looking for a rifle to shoot the widest variety of ammunition, get one chambered in 5.56x45mm (and verify that it does indeed have a 5.56mm chamber) as this will let you shoot both cartridges safely.

What about .223 Wylde chambers? As long as it is built to the appropriate specifications using a good reamer and is in good overall condition, the 223 Wylde chambers originally designed by Bill Wylde are also safe to use both .223 Remington and 5.56x45mm NATO ammunition in.

450 Bushmaster vs 458 SOCOM vs 50 Beowulf: Battle of the Big Bore AR Cartridges

The Hornady 10th Edition (p160-178) reloading manual, The American Rifleman,and the Guns & Ammo Network were used as references for this article.

NEXT: HOW TO ZERO THE BACK-UP IRON SIGHTS ON AN AR-15