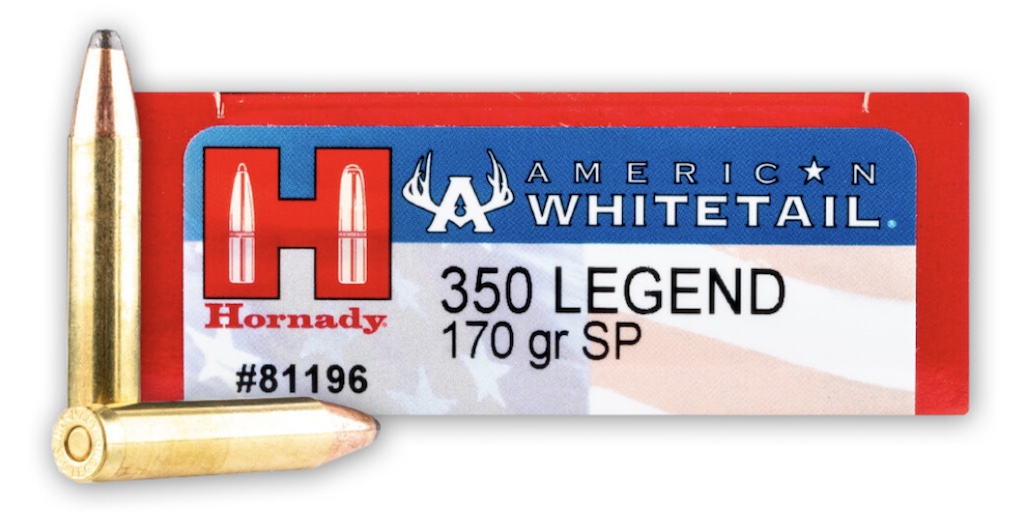 Many people use the mild mannered 350 Legend for hunting deer, feral hogs, and many other species of big game with excellent results. Here are a few great brands of 350 Legend ammo that will probably serve you very well next time you’re afield.

Released in 2019 by Winchester Repeating Arms, the 350 Legend cartridge is mild recoiling, yet surprisingly effective straight wall cartridge for deer hunting. It also has the added benefit of fitting in an AR-15 platform and meeting the legal requirements some states have for hunting deer with straight walled rifle cartridges. Not surprisingly, the cartridge is now very popular and many companies like Federal Premium, Hornady, and Winchester produce several different variants of 350 Legend ammo for hunting deer, feral hogs, and other big game animals.

This cartridge is not well suited for use at longer ranges, but easily has a flat enough trajectory for shots out to 200 yards or so. That’s plenty of reach for the vast majority of American whitetail deer hunters. At the same time, the cartridge has surprisingly mild recoil.

Not surprisingly, the new round was quickly adopted by hunters in states like Indiana, Iowa, Ohio, and parts of Michigan where straight-wall cartridges are required. At the same time, the new cartridge has also really caught on in other parts of the country where hunters want a low recoil cartridge that’s still effective on deer at shorter ranges.

That said, it’s important to realize that not all 350 Legend ammo is suitable for hunting. In particular, full metal jacket (FMJ) ammo is best for use at the range, not on animals.

Fortunately, there are definitely several excellent choices for factory 350 Legend hunting ammo from several different manufacturers that will work great on all sorts of big game in North America.

So, regardless of whether you’re using a bolt action Ruger American Ranch, a Mossberg Patriot, a variant of the AR-15, or one of the many other 350 Legend rifles in production, there is pretty much guaranteed to be something for everyone on the list below of the best 350 Legend ammunition for hunting.

In today’s post, I’m going to show you the best 350 Legend hunting ammo for deer, feral hogs, black bears, and other big game. I’ll also go over the pros and cons of each individual load.

It’s not flashy or trendy, but this Winchester Super X loading with a 180-grain bullet is definitely great 350 Legend ammo for deer hunting. This ammunition also tends to shoot very accurately in most rifles.

These bullets are pretty soft and tend to expand very well at ranges inside 200 yards. Additionally, since this loading uses heavier bullets with a higher sectional density, it also tends to penetrate well and you’ll very likely get an exit wound from a deer regardless of the shooting angle with this bullet.

While I think this is outstanding deer hunting ammunition, I do not recommend using Winchester Super X ammo for hunting bigger game like black bear, elk, or moose with a 350 Legend. Instead, stick to medium game like feral hogs and deer with this ammunition and you should have outstanding results.

In addition to being very effective, this ammunition has one of the lowest costs per round out of all 350 Legend ammo on this list. So, it’s tough to go wrong if you want some great 350 Legend ammo for deer hunting. No deer will run very far afterwards after taking a 180 grain Power Point through the vitals.

This 350 Legend is a fantastic deer hunting cartridge and hunters have taken a lot of deer with it in recent years. Naturally, lots of companies design and market various ammunition lines specifically for whitetail deer hunting. Hornady’s American Whitetail line is a notable example.

Loaded with Hornady’s InterLock lead core bullet, this ammunition is extremely effective on deer-size game. The bullet features what Hornady calls an “InterLock ring” that mechanically attaches the jacket to the lead core. So, it’s not technically a bonded bullet, but this feature helps with weight retention and penetration while reducing the odds of core-jacket separation.

The end result is a bullet that’s more robustly constructed than other popular whitetail bullets (like the Hornady SST), but still expands very well, will deliver devastating results on impact, and is more likely to produce exit wounds, even on on bigger bodied deer (especially on a broadside shot).

Finally, Hornady American Whitetail ammunition is also very reasonably priced. With all that in mind, this is arguably the best choice if you’re looking for great 350 Legend deer hunting ammo, especially at ranges inside of 200 yards. A 170 gr InterLock is absolutely deadly on whitetail deer at 350 Legend velocities. There’s not a darn thing wrong with using these Hornady InterLock soft points on feral hogs either and they can also be extremely effective on hogs.

The end result is a combination of controlled expansion, penetration, and high weight retention. Nothing is guaranteed, but 350 Legend Power Max Bonded ammo is more likely to produce an exit wound than some other 350 Legend ammo options.

With all that in mind, this is great ammo for those who want an exit wound on a deer as well as those who want to use their 350 Legend for black bear and feral hog hunting. By the same token, these bonded hollow points are the ammo I’d recommend for elk hunting with a 350 Legend as well.

Winchester’s Deer Season XP line of ammunition contains some of the best 350 Legend ammo for deer hunting. The Extreme Point bullet this rifle ammo uses is similar to Winchester’s Power Point bullet, but the 150-grain bullet used in this loading has a large diameter polymer tip that’s specifically designed to open up rapidly produce a gigantic wound channel along with massive impact trauma.

This often results in a very short tracking job and a very easy to follow blood trail. Even so, it’s designed specifically to compete with popular whitetail deer hunting ammo like the Federal Power-Shok, Hornady American Whitetail, Remington Core-Lokt, and Winchester Super-X in terms of accuracy and reliability.

So, not only is this Deer Season XP load some potentially very accurate 350 Legend hunting ammo, but it also has a very good reputation for producing a giant wound channel and minimizing the distance deer run after being hit.

I would not use this ammo for hunting elk or black bear with the 350 Legend. However, this Winchester ammo is one of my top recommended brands of 350 Legend ammo for whitetail deer hunting. The same goes for blacktail and mule deer hunting (feral hogs too).

The 350 Legend is becoming a popular cartridge among those who run suppressed rifles (especially in the AR-15 platform). Understandably, many hunters want to use 350 Legend subsonic hunting ammo to maximize the effectiveness of their suppressed rifle. This is especially true in certain situations (like feral hog control) where the hunter is trying to shoot multiple animals out of a group.

Unfortunately, there are some very real downsides to using subsonic 350 Legend ammo in a hunting situation. In particular, subsonic ammo has a very arching trajectory and it’s hard to find bullets that will reliably expand at those slower subsonic velocities (under about 1,100fps depending on temperature and altitude).

This makes it both more difficult to hit the animal and the bullets cause less damage to the animal when they do hit when compared to supersonic loads. Not surprisingly, many older subsonic loads have a poor reputation among hunters.

However, Hornady’s new Subsonic line of rifle ammunition aims to solve those issues with subsonic loads.

Designed specifically for both accuracy and performance below the speed of sound, Hornady 350 Legend subsonic ammunition uses their new 250gr Sub-X bullet. This heavy for caliber bullet has a deep hollow point cavity with a polymer Flex Tip and long grooves in its jacket to help with reliable expansion, larger wound cavities, and massive energy transfer, even even at low impact velocities.

With an advertised muzzle velocity of 1,050fps, this ammunition is extremely quiet (especially suppressed). This particular loading results in even less recoil and muzzle blast from the already mild recoiling 350 Legend as well.

Since it’s designed specifically to expand at subsonic impact velocities, this is incredibly effective 350 Legend subsonic hunting ammunition on game like deer and feral hogs at short range and with good shot placement.

And yes, it will function very well in a semi-automatic 350 Legend rifle as well as in a bolt-action rifle.

The 250-grain bullet used in this ammunition still has a pretty arching trajectory, but it shoots flat enough for use at shorter range. For instance, this ammo will hit no more than 3.5″ high at shorter range and will hit about 5″ low around 125 yards with a 100 yard zero.

So, a good marksman should have an effective range of 100-125 yards with this ammunition and it should work great for game at close ranges.

With all that in mind, I think this is the best 350 Legend subsonic hunting ammo currently available. When used in conjunction with a good AR-15, a suppressor, and maybe even a thermal scope, the hogs won’t know what hit them until too late. It’s also a darn effective and extremely mild recoiling deer hunting load for use in a regular bolt action rifle (with or without a suppressor).

Also Available at: Brownell’s and Cabela’s

Don’t be fooled by the name: Winchester Defender 350 Legend ammo is suitable for hunting as well as for personal defense. This load from Winchester Ammunition is loaded with a bullet that’s almost identical to the one used in Winchester’s Power Max Bonded 350 Legend ammo line of ammo, but is just in a different package.

All things considered, it’s a very good choice for personal defense application as well as for hunting. It will also work great in an AR-15 platform as well as in a bolt-action hunting rifle.

So, don’t worry if this is the only 350 Legend ammo you can find right now. Put that bullet where it needs to go and it will work just fine on deer, feral hogs, or even black bears. The same goes for personal protection from both 2 and 4 legged predators.

It’s not new, fancy, or sexy, but Federal Fusion ammunition with a 160gr bullet is outstanding 350 Legend ammo for deer hunting. In addition to being very effective, this ammunition is also somewhat reasonably priced.

This is ideal ammo for feral hog and deer hunting with semiautomatic rifles (like an AR platform) as well as bolt-action rifles. You could also include game like black bear in there as well. All things considered, this is outstanding on deer sized game and you can’t go wrong with Federal Fusion 350 Legend ammo out in the deer woods.