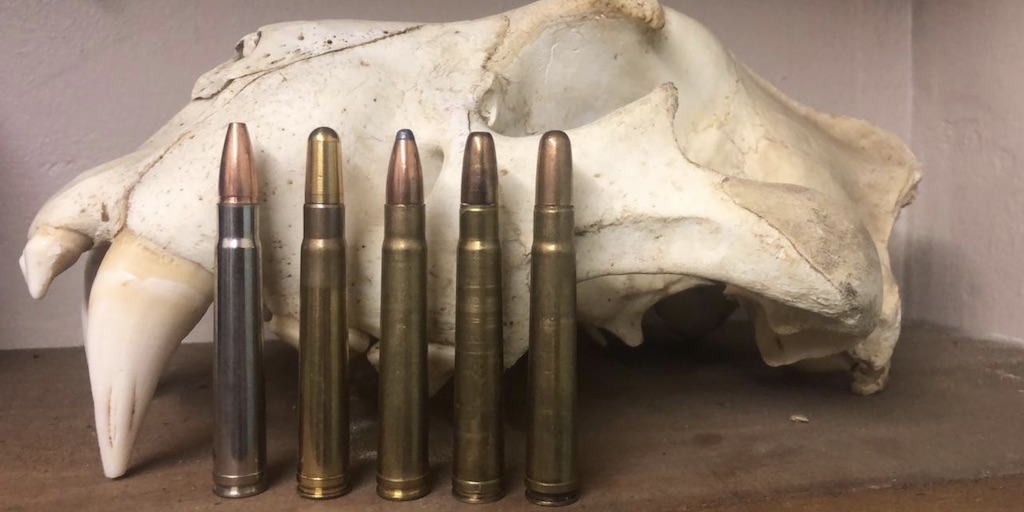 Though the .375 Holland & Holland Magnum is an extremely versatile cartridge, not all .375 H&H ammo is created equal. Here are a few great brands of .375 H&H ammo that should serve you well regardless of whether you’re pursuing cape buffalo in Africa or moose and brown bear in Alaska.

The legendary .375 H&H Magnum cartridge has a well deserved reputation as a very effective big game hunting cartridge suitable for hunting a wide variety of game. However, it is most commonly used for hunting large, tough, and/or dangerous game like moose, grizzly bear, cape buffalo, and elephant. With that in mind, using the right .375 H&H ammo for hunting those species is extremely important.

Not only must the ammunition function reliably in your chosen rifle and shoot accurately, but it must use bullets that exhibit good terminal performance after penetrating through tough hides, thick muscles, and heavy bones. Fortunately, there are several different varieties of .375 H&H ammo specifically designed for hunting various species of big game.

Though it will never be in the same category as serious big bore cartridges like the .416 Rigby, .458 Winchester Magnum, or .458 Lott, the .375 H&H is still a very powerful cartridge and most factory loads deliver well over 4,000 ft-lbs of energy at the muzzle with manageable recoil. For these reason, it’s one of the most popular cartridges of all time for hunting African game and also has a great reputation for effectiveness on black bear, moose, and brown bear in North America.

So, regardless whether you’re hunting Africa, North America, or somewhere else, you’ll probably find something that will work well for you on the list below of the best .375 H&H ammo for hunting.

Barnes produces their excellent VOR-TX line of ammunition in a wide variety of cartridges and their 300 grain TSX load is a great choice for .375 H&H hunting ammunition suitable for everything from small plains game all the way up to cape buffalo. In fact, if you’re looking for the best .375 H&H ammo for cape buffalo hunting, the Barnes 300gr TSX is my #1 recommendation.

The Barnes X bullet has long been a favorite among African PHs for hunting all manner of game and the TSX is a more modern version of that legendary bullet. Optimized for rapid expansion, high weight retention, and deep penetration, it’s an outstanding bullet suitable for taking virtually every species of game on the planet. For this reason, if you want to pick a single load for hunting game like kudu, eland, cape buffalo, brown/grizzly bear, elk, and moose with your .375 H&H, then go with the 300 grain Barnes TSX load.

Most hunters pursuing cape buffalo will load a premium expanding bullet (aka softs) for their first shot and non-expanding bullets (aka solids, though not all are true monolithic solids) for all follow-up shots on the buffalo. Unfortunately, the Banes Banded Solid is no longer available in .375 caliber to pair with the TSX.

However, the Barnes TSX bullets are so tough and penetrate so well that some PHs recommend their clients forego using solids if using the Barnes TSX. Check with your PH before doing so, but if this is acceptable with your guide, using the TSX will greatly simplify the logistics of planning a hunt and you’ll be able to hunt both plains game and buffalo with just a single type of .375 H&H ammo.

Finally, because it uses 100% copper bullets, the Barnes VOR-TX is the perfect .375 H&H hunting ammo for use in states like California that prohibit the use of lead bullets.

The Hornady Dangerous Game series is another excellent .375 H&H ammunition choice for hunting cape buffalo. As previously mentioned, most hunters load a combination of softs and solids in their magazine. While this can be a deadly combination for the buffalo, it can sometimes be difficult to find expanding and non-expanding bullets that both shoot to the same point of impact.

Hornady tackled that problem head on when they rolled out their Dangerous Game lineup with the Dangerous Game Solid (DGS) and Dangerous Game Expanding (DGX) bullets. Both bullets were designed using the same bullet profile and have the same ballistic coefficient. Hornady also loaded their factory ammo using both bullets to the same muzzle velocity. Not surprisingly, both bullets shot to virtually the same point of impact at typical cape buffalo hunting ranges.

The DGS bullet is not designed to expand. On the contrary, with a thick, copper clad steel jacket, the DGS bullet is designed for maximum penetration from all angles on heavy boned and thick-skinned game.

The DGX Bonded bullets also use a copper-clad steel jacketed bullet, but have a soft point and are designed to expand to 1.5 to 2 times their diameter. The original DGX bullets got something of a bad reputation for occasional core-jacket separation and otherwise expanding too quickly at the expense of penetration, but Hornady seems to have fixed this issue with the new DGX Bonded bullet. As the name states, the DGX Bonded has a lead core that’s bonded to the jacket for improved penetration and weight retention compared to the original DGX bullet.

Like many other .375 H&H solids, the DGS is also a very good choice for hunting extremely small game like duiker, klipspringer, and steenbok where it’s important to minimize hide damage. Additionally, the DGX Bonded is an acceptable choice for hunting many of the larger species of plains game like eland, kudu, and zebra.

Federal Premium produces their outstanding Cape-Shok line of ammunition using four different bullets: the Swift A-Frame, the Trophy Bonded Bear Claw, the Trophy Bonded Sledgehammer Solid and the Woodleigh Hydro Solid. All four bullets three bullets are excellent choices for hunting a variety of game from moose and brown bear in Alaska to plains and dangerous game in Africa.

The 300 grain Swift A-Frame ranks right up there with the Barnes TSX as one of the most highly regarded premium quality expanding bullets. It’s a wonderful all-around choice for hunting North American big game like elk, moose, caribou, and brown bear and is also great for African plains game and buffalo. I took a cape buffalo using an A-Frame many years ago and it performed exactly as advertised. Unfortunately, it’s tough to find a solid that shoots to the same point of impact as the Swift A-Frame, which limits its utility on buffalo.

Swift does make the Break-Away Solid they market as a non-expanding companion to the A-Frame. Unfortunately, it’s really, really hard to find factory loaded ammo or even component Break-Away Solid bullets for reloading.

On the other hand, Federal Premium also manufactures their Cape-Shok line of ammo with both Trophy Bonded Bear Claw and Trophy Bonded Sledgehammer Solid bullets. Like the A-Frame, the Bear Claw is another excellent premium quality, controlled expansion bullet suitable for cape buffalo, virtually all African plains game, and really big and tough North American big game like the moose and brown bear. Fortunately, the Sledgehammer Solid is a high quality non-expanding 300 grain bullet that will really do a number on a cape buffalo or elephant.

John Nosler’s infamous encounter with a moose in British Columbia back in 1946 spawned the creation of the legendary Nosler Partition bullet. The Partition was one of the very first controlled expansion bullets marketed for American hunters and it’s still an outstanding choice for hunting a wide range of game all over the world.

Indeed, the 300 grain Nosler Partition is one of my top .375 H&H ammo recommendations for hunting moose as well as caribou, elk, grizzly bear, and brown bear. The same goes for virtually all species of African plains game.

Since the front core of the Partition is not bonded to the jacket, it would not be my first choice for use on cape buffalo, though it will absolutely work in that role. If you do elect to hunt buffalo with the Nosler Partition, the 300gr Nosler Safari Solid is designed to shoot to the same point of impact as the 300gr Partition at close range. A true monolithic solid, the flat nosed Nosler Solid is designed for deep, straight line penetration on heavy boned, thickly muscled animals like cape buffalo and elephant.

Nosler also produces their Partition bullet in a 260 grain variant. While that bullet is too light and has too low of a sectional density for my taste for use on cape buffalo, it’s an outstanding choice for hunting bear, elk, or moose. In fact, since it shoots a little flatter and has a higher velocity than the 300 grain Nosler Partition load discussed above, the lighter Partition is probably a better ammo choice for elk hunting with the .375 H&H.

Don’t worry: the 260 grain Nosler Partition is still plenty powerful for hunting just about any species of game in the world this side of cape buffalo.

Hunters looking for some high quality .375 H&H ammo for hunting elk, caribou, grizzly bear, and moose just received another great choice in Hornady’s brand new Outfitter line of ammo. Hornady specifically designed this ammo for use on guided hunts in really tough environments like the mountains of Colorado or the Alaskan coast.

Utilizing a 250gr GMX bullet, this is some of the flattest shooting .375 H&H hunting ammunition on this list and will really do a number on really big game at several hundred yards. So, if you like hunting with a .375 H&H and need something capable of really reaching out to long range and putting an elk or a moose on the ground, this is the ammo for you. Those 250 grain bullets are probably capable of ethically taking down cape buffalo, but I wouldn’t recommend it. However, this is excellent stuff for virtually every other species of big game in the world.

Finally, like the Barnes TSX, GMX bullets are lead free, which makes the Hornady Outfitter line another great .375 H&H hunting ammo choice for use in states like California that prohibit the use of lead bullets.

Remember: choosing the right .375 H&H hunting ammunition is just the beginning. There are a number of great quality .375 H&H rifles made by companies like Browning, CZ, Weatherby, and Winchester. Get a well made bolt-action rifle chambered in .375 H&H, ensure your chosen ammunition functions reliably and shoots well in your rifle, study proper shot placement for the game you intend to hunt, and learn to shoot your rifle well. If you do those things, you’ll be well prepared for most common hunting situations.

NEXT: 375 RUGER: AN UP AND COMING DANGEROUS GAME CARTRIDGE