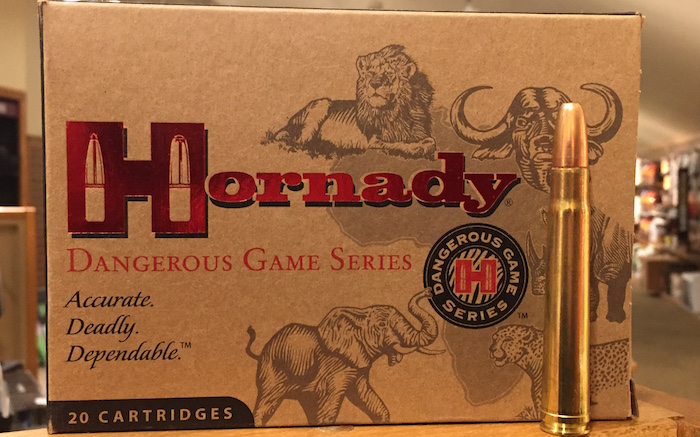 Is the .375 H&H Magnum the King of Big Game Hunting Cartridges?

When the gun makers at Holland & Holland introduced the .375 Belted Rimless Nitro Express cartridge (better known as the .375 Holland & Holland Magnum or the .375 H&H) in 1912, they likely had no idea that they had designed what would eventually become one of the most successful big game hunting cartridges of all-time. Even though many other outstanding big game hunting cartridges have been developed over the century that has elapsed since the .375 H&H first entered the hunting scene, none have a track record of success quite as impressive as the .375 H&H.

The introduction of the revolutionary 9.3x62mm Mauser in 1905 caught the major British gun makers flat-footed. The 9.3x62mm Mauser was designed for use in the revolutionary Mauser bolt-action rifle, which was cheaper, more reliable, had a larger magazine, and was easier to manufacture than previous magazine rifles or double rifles of the day. Additionally, the cartridge used smokeless powder, which could propel bullets at a significantly higher velocity than black powder. Not surprisingly, the Mauser cartridge quickly took the hunting community by storm and hunters in Europe and Africa quickly armed themselves with the new cartridge.

Fearful of losing their market share to a German cartridge, British gun makers scrambled to develop cartridges that took advantage of the same advances in firearm technology and could compete with the 9.3x62mm Mauser. Following on the heels of the Mauser cartridge, the .375 H&H and other cartridges developed around the same time (like the .416 Rigby and the .404 Jeffery) changed the hunting world forever.

Like the 9.3x62mm Mauser, all of these cartridges used cordite or smokeless powder as their propellent and were built for use in bolt action rifles. Since the propellents they used were much more efficient than black powder, they could push bullets at significantly higher velocities than was previously possible. This in turn allowed hunters to use bullets with smaller diameters and higher sectional densities that penetrated much better than the bullets used in the previous generation of the old big bore rifles. Additionally, hunter equipped with a good quality bolt-action rifle could fire 3-5 shots before emptying the magazine (compared to only one or two with earlier rifles). Obviously, these capabilities were a significant improvement in performance over the other popular hunting cartridges of the day and explains the rapid explosion in popularity of these new cartridges.

The original .375 H&H loads introduced by Holland & Holland in 1912 used cordite as a propellent and pushed a 235gr bullet at about 2,800fps, a 270gr bullet at about 2,650fps, and a 300gr bullet at 2,500fps (about 4,100-4,200 foot pounds of energy). The gun makers at Holland & Holland also specifically designed the cartridge with optimum reliability under hot conditions in mind. For this reason, they built the cartridge with a gently tapering case to aid in chambering and extraction and used a relatively low pressure load. Since the cartridge lacked both a sharp shoulder and a rim, the designers of the .375 H&H incorporated a revolutionary belt near the base of the cartridge to ensure correct headspace upon loading the cartridge.

The designers of the .375 H&H were successful in their goal of building a reliable cartridge ideal for use in hot conditions. Unfortunately, a gently tapering case is also relatively inefficient in terms of powder capacity. For this reason, the .375 H&H Magnum has a relatively long, 72.39mm case. This is over 10mm longer than the 9.3x62mm Mauser case and nearly 7mm longer than the .375 Ruger case, both of which fit in a standard length rifle action while the longer .375 H&H Magnum is restricted to use in rifles with magnum length actions.

Though rifles with magnum length actions are typically larger, heavier, and more expensive than rifles with standard length actions, that did not dramatically impact the popularity of the cartridge after it was introduced. The 9.3x62mm Mauser remained popular among hunters for many years, but eventually faded after World War II. The German armaments industry suffered incredible damage during the war, which obviously made 9.3x62mm ammunition difficult to obtain.

The .375 H&H Magnum did not suffer from this problem and hunters in Africa started to replace their Mausers with the .375. The popularity of the cartridge got a further boost when Winchester started building a version of the legendary Model 70 rifle chambered in .375 H&H. As American hunters armed with the Model 70 flocked to the Dark Continent during the post-war period, the already common .375 H&H surged in popularity to become one of the most popular big game hunting cartridges in Africa and never looked back.

Due to the incredible popularity of the cartridge, just about every major manufacturer produces factory loaded .375 H&H Magnum ammunition. For instance, Armscor, Barnes, Buffalo Bore, Corbon, Federal, Hornady, Norma, Nosler, Prvi Partizan, Remington and Swift all make at least one .375 H&H load. Though 270gr and 300gr bullets are the most popular, it’s also possible to find 235gr, 250gr, 260gr, and 350gr bullets.

For instance, Hornady loads their 300gr DGX/DGS bullets to an advertised velocity of 2,530fps, which is a great combination for hunting cape buffalo. Federal’s load of 250gr Trophy Bonded Bear Claws at 2,670fps is a flat-shooting and hard hitting load for thin-skinned game like plains game, moose, or bear.

Handloaders also have a ton of choices and, with the notable exception of the Barnes Banded Solid, just about every premium bullet currently on the market (like the Barnes Triple Shock, Nosler Partition, and the Hornady DGS/DGX) is available in .375 caliber.

For a more detailed discussion on .375 H&H hunting ammunition, read this article:

With the exception of the 350gr loads, the .375 H&H has a relatively flat trajectory, making it suitable for shots out to 400 yards or so (perhaps further) in the right hands. Additionally, while it does kick a bit harder than the 9.3x62mm Mauser, most .375 H&H loads only have a moderate amount of recoil. Especially when shot from a standing position in a rifle that fits the shooter well, the .375 H&H Magnum actually kicks much less than you’d think a cartridge that powerful would. Indeed, most hunters can handle the recoil of the .375 H&H without too much trouble.

The .375 H&H Magnum is an extremely versatile cartridge, perhaps the most versatile big game hunting cartridge in the world. It hits hard, has a flat trajectory, and is absolutely deadly on just about every big game species ranging from the diminutive dik-dik up to elephant.

Since most loadings produce over 4,100 foot pounds of energy at the muzzle, the .375 H&H meets the minimum legal requirements to hunt members of the African Big 5 in every country in Africa and it’s one of the most popular cartridges for hunting dangerous game like lion, Cape Buffalo, and hippopotamus.

Since it’s so versatile, many hunters choose the .375 H&H when they want a “one gun safari.” By simply changing the bullets used, a hunter can use the cartridge for just about any species of game in the world regardless of whether that person is pursuing cape buffalo in Africa or on a New Zealand hunting safari for red stag.

For instance, the hunter in the video below made a great shot on a Cape Buffalo with a 300gr .375 H&H bullet that hit the heart and both lungs. The buffalo was dead on his feet at that point and ran around 100 yards before expiring. All things considered, you can’t expect much better performance than that when dealing with incredibly tough animals like buffalo. There’s a reason why the .375 H&H is such a popular cartridge for Cape Buffalo hunting.

At the same time, those same heavy 270gr and 300gr bullets that are ideal for really big and tough species of game like Cape Buffalo and Water Buffalo are also quite effective on smaller species of game. Controlled expansion bullets will quickly take down medium and large species like eland, wildebeest, and impala without causing significant damage to their hides or destroying a bunch of meat. The same goes for the small species of antelope like klipspringer and duiker when using non-expanding solids or full metal jacket bullets.

For example, I was hunting eland in South Africa several years ago when we came across a herd of impala with a nice ram in it. I was carrying a CZ-550 chambered in .375 H&H and loaded with 300gr controlled expansion bullets well suited for hunting for large species of game like buffalo and eland. As you can see, it did a number on that impala without ruining an excessive amount of meat or destroying the hide.

While the .375 H&H Magnum is a great cartridge, it’s not perfect by any stretch of the imagination. It’s a little on the light side for hunting elephant or for use as a buffalo “stopping” cartridge, but it will do in a pinch for either task. It also has a whole lot more recoil than cartridges like the 6.5 Creedmoor or .30-06 Springfield. All things considered though, the .375 is still a really solid performing cartridge for a wide range of tasks.

Few other cartridges have a resume as impressive as the .375 H&H Magnum. If you’re looking for a good quality cartridge capable of taking the widest possible variety of game with a moderate amount of recoil, you could do a whole lot worse than the .375 H&H. There is a reason why the cartridge is so popular among hunters and outfitters in Africa: because it works.

Do you have a rifle chambered in .375 H&H that you’re just chomping at the bit to take on a hunt?

8 thoughts on “.375 H&H Magnum: The Most Versatile Big Game Hunting Cartridge Of All-Time?”

Scroll back to top
427shares