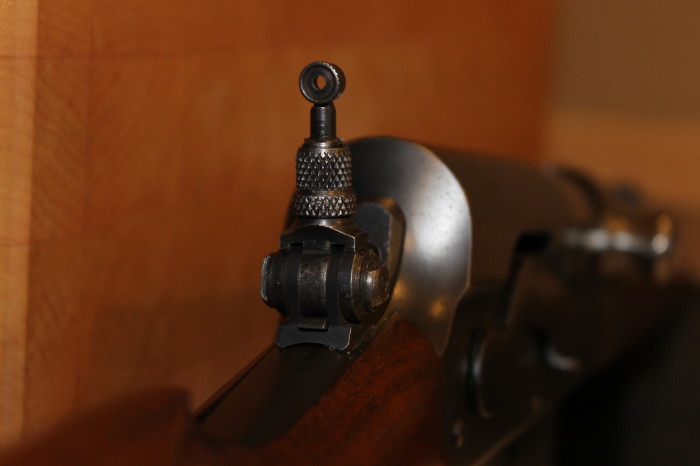 Check out this article discussing the advantages and disadvantages of a scope vs iron sights when hunting.

Scope, or iron sights? That question has existed for as long as hunters have had the choice available to them. Unfortunately, I won’t settle that question during the course of this article. However, I do hope to discuss the pros and cons of hunting with iron sights vs a scope and hopefully provide some good advice for prospective hunters.

A high quality scope is a great option for most hunters. Not only does it help hunters take advantage of flat shooting cartridges like the .204 Ruger, 6.5 Creedmoor, and .300 Winchester Magnum by magnifying small and/or distant targets, but it provides great light gathering and the increased magnification will aid in identifying game. A first-rate scope with a large objective lens will gather much more light than iron sights will.

This is especially important while hunting, since some of the most productive times are during the first and last hour of light each day. The extra few minutes of shooting light that a high quality scope provides can be the difference between a filled tag and a missed opportunity. In addition a scope allows the hunter to identify game in less than ideal circumstances, such as through thick foliage. This can help the hunter to determine the specifics of an animal, such as if it is a “legal” buck to shoot. This is especially true for people with poor eyesight who can certainly appreciate the clarity and magnification provided by a good scope.

Even though they provide several large advantages, using scopes does have a down side.

First, it must be mounted and sighted in properly. If care is not taken with these steps, even the best rifle scope will be no more than an expensive paperweight.

Second, while scopes today are generally more durable than they were even 20 years ago, they are generally not nearly as robust as iron sights and more care in handling is necessary when transporting a scoped rifle, particularly when flying. One careless baggage handler can knock a scope out of zero or damage it beyond repair. This could be disastrous for a hunting trip and ruin a hunt before it even starts.

Scopes are also generally heavier and more bulky than iron sights. For a hunter sitting in a deer stand this is less of a concern than for a hunter walking 5-10 miles a day hunting in Africa. If you will be doing a lot of walking on a hunt, you must assess what your needs are and balance them with the type of sighting system you plan on carrying. Carrying an unnecessary extra pound or two can quickly sap your energy and make the shot much more difficult at the end of a long stalk.

In addition, especially on scopes with higher magnification, it generally takes more time to acquire the target with a scope than with iron sights. When hunting in heavy cover, or when the target is likely to be moving rapidly, a scope can be more of a hindrance than a help.

Iron sights are generally cheaper, lighter, more durable, and faster to acquire a target with than a scope. One can purchase a high quality aperture (or “peep”) sight for $100-200, which is certainly cheaper than good scopes, which typically start at $250 and go up from there. Especially for a hunter on a budget, this is something to consider. An iron sight will weigh a couple of ounces at most, making it an attractive sight for a hunter who will be carrying a rifle for a long distance. Also, while they are not indestructible, they are considerably tougher and more difficult to damage than a scope. Finally, a peep sight provides the fastest target acquisition of almost all rifle sights since the human eye will automatically center the front sight when looking through the rear aperture; thus enabling the shooter to focus on the front sight and align it with the target before firing.

The disadvantages of iron sights become most apparent when hunting in low light conditions and at long ranges, since an aperture sight does not gather as much light as a scope does and provides no magnification. This means that the hunter has less shooting light available when hunting at dawn or dusk and in thick cover. Also, since iron sights provide no magnification, there is a definite, much closer, maximum effective range for utilizing them when compared to a scope. While target shooters are certainly capable of making accurate shots out to 1000 yards with iron sights, that does not mean that they are practical to hunt at that distance with. In reality, the maximum hunting range for hunting with iron sights is about 300 yards, and often much closer.

I personally would be very cautious about taking a shot longer than 150 yards on a game animal with iron sights.

Red dot sights are an option that do a decent job bridging the gap between iron sights and scopes. Like all sights, there are a number of of red dot sights on the market over a wide spectrum of both prices and quality. A high quality red dot sight will offer extremely fast target acquisition (even faster than even a peep sight) along with good precision at short to medium ranges. Red dot sights can also be paired with an external magnifier to provide better target acquisition abilities and easier shooting at longer ranges. Depending on the exact type used, red dot sights provide the widest field of view of any type of sight or scope.

Unfortunately, red dot sights do have their disadvantages. For one thing, red dot sights, while not extremely heavy, do weigh more than iron sights. Another problem is that they are usually battery powered. While a good red dot sight will have a long battery life, the consequences of having a battery die can range from annoying to dangerous, depending on the situation. Finally, a high quality red dot sight is expensive, sometimes even more expensive than a traditional scope. Of course, this price only increases if an external magnifier is used in conjunction with the red dot sight.

Which type of sighting system you use on your hunt should be dictated by the conditions on the hunt. Obviously, if you are hunting on an open plain with the potential for long range shots, a good scope is in order. If you are hunting in moderately thick woods and want to maximize your hunting time during periods of low light, you should also probably be using a scope.

At the same time, if you are hunting in the relatively close confines of a thick forest with the maximum range for a shot around 50 yards or less, a peep sight is probably your best bet. The same holds true if you are expecting a fast, close range encounter with your quarry. Indeed, since most of their shots are at relatively close, but rapidly moving targets, many professional hunters guiding dangerous game hunts use a ghost ring aperture sight or a red dot sight for this exact reason.

Sometimes, it is best to have a rifle set-up that you can rapidly change as conditions dictate. Some rifles, such as many of the modern production AR-15 variants, are perfect for rapidly changing out optics. With a set of high quality, quick detachable AR-15 scope rings, a shooter can rapidly switch between a scope, red dot sight, and iron sights in a matter of seconds.

7 thoughts on “Scope vs Iron Sights”