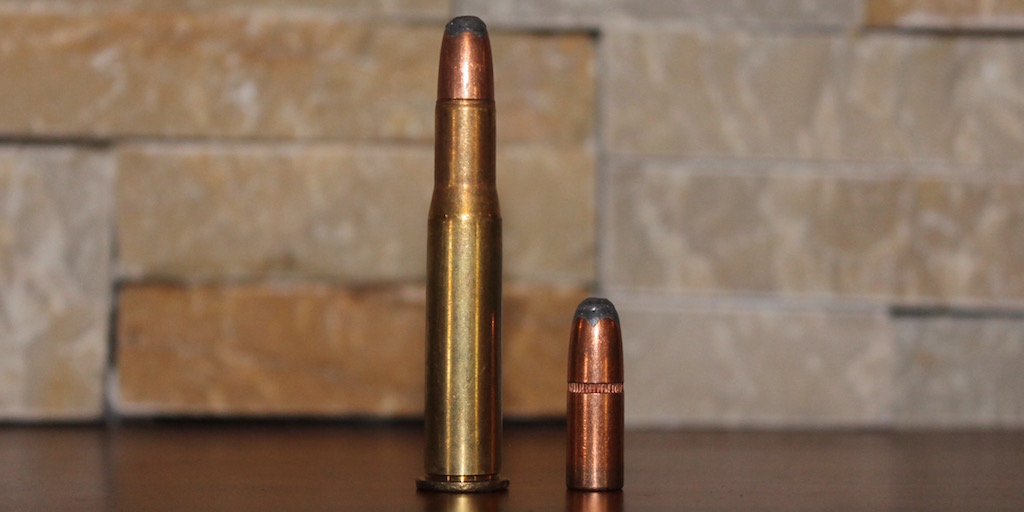 The .30-30 Winchester is still one of America’s favorite deer cartridges.

When they close their eyes and try to imagine a deer rifle that best represents classic Americana, many hunters likely picture a lever-action chambered in .30-30 Winchester. That shouldn’t be surprising because after all, the .30-30 Winchester has been around for well over a century and has arguably taken more deer in United States than any other cartridge.

The question remains though: why is the .30-30 Winchester still so popular? It’s an old design originally intended for a hunting market that has drastically changed since the 1890s. Perhaps even more significantly, the .30-30 can’t come anywhere close to the performance of newer cartridges like the 7mm Remington Magnum, .300 Winchester Magnum, or even the .30-06 Springfield on paper.

Even so, demand for the .30-30 Winchester is still high in the United States and it consistently ranks among the best selling cartridges with the big ammunition companies.

In today’s post, I’m going to discuss why the .30-30 Winchester remains so popular after all of these years despite its advanced age.

First introduced by Winchester Repeating Arms in 1895 for their Model 1894 rifle, the .30-30 Winchester made history as the first sporting cartridge loaded exclusively with smokeless powder. Winchester originally named the cartridge the “.30 Winchester Smokeless” and it carried a “.30 WCF” (short for .30 Winchester Center Fire) headstamp.

However, the management at rival gun manufacturer Marlin knew a good thing when they saw it and adopted the cartridge for use in their Model 1893 rifle several months later. Not wanting to give their competitor free advertising, Marlin worked with the Union Metallic Cartridge Company (UMC) to produce identical ammunition with the designation .30-30 Smokeless, or just .30-30 for short.

UMC derived those names by using the black powder naming convention in common use at the time that consisted of the caliber of the cartridge followed by the standard load of powder in grains (like the .45-70 Government for instance). Since the new Winchester cartridge used a .30 caliber bullet (.308″ diameter) propelled by 30 grains of smokeless powder, the cartridge received the designation “.30-30.”

Despite their best efforts, the name .30-30 Winchester eventually stuck and the cartridge now carries a “.30-30 Win” headstamp.

During those days, lever action rifles still ruled supreme with hunters in the United States. So, by introducing a new cartridge that was both dramatically more powerful than the competition and available in a dependable, lightweight, easy to handle, and reasonably priced rifle in the Model 1894, Winchester created the perfect conditions for a major commercial success with the .30-30 Winchester.

Not surprisingly, hunters all over North America, quickly started snapping up the new rifles and cartridges. Over the years, it’s gained a reputation as a wonderful cartridge for hunting deer, black bear, and feral hogs at short to moderate range. It’s quite possible that hunters have taken more deer with Model 1894 rifles chambered in .30-30 Winchester than any other rifle/cartridge combination.

Indeed, the fact that competitors have specifically marketed their cartridges as better alternatives to the .30-30 (like Remington did with the .35 Remington) and that the .30-30 case has spawned so many wildcat and factory derivative cartridges (like the .219 Zipper and the 7-30 Waters) are both testaments to the popularity and longevity of the cartridge.

Even though the .30-30 is well over a century old, it’s still extremely popular in the United States and ranks up there with rifle cartridges like the .223 Remington, .308 Winchester, 7.62×39, .270 Winchester, and .30-06 Springfield in yearly ammunition sales. As a result, just about every ammunition manufacturer produces .30-30 ammo. For instance, Barnes, Browning, Buffalo Bore, Federal Premium, Fiocchi, Hornady, Nosler, Prvi Partizan, Remington, Sellier & Bellot, and Winchester all manufacture at least one .30-30 Winchester load.

In the years following Winchester’s release of the .30-30, the major ammunition companies introduced 150 grain and 170 grain loads for the cartridge. These are now the most popular bullets weights for .30-30 ammo. Due to the advent of better quality smokeless powder, modern loads reach around 2,400 feet per second with 150 grain bullets and 2,200 feet per second with 170 grain bullets.

Since the Model 1894 rifle has a tube magazine, bullets in the magazine are stacked tip to primer. For that reason, most .30-30 ammunition uses round or flat nosed bullets to prevent recoil from causing the tip of one cartridge from detonating the primer of a cartridge stacked on top of it. While using flat or round nose bullets does eliminate that potential safety risk, those stubby bullets aren’t very aerodynamic and downrange performance suffers.

Fortunately, there are a couple of options to help alleviate that problem to a certain degree.

First, .30-30 Winchester ammo is available as part of the Hornady LEVERevolution line. These bullets have a flexible polymer tip that increase the ballistic coefficient of the bullet, but are safe to use in a tubular magazine. Loaded with either 140gr MonoFlex or 160gr FTX bullets, the .30-30 Winchester LEVERevolution ammunition offers a significant ballistic improvement over .30-30 ammo loaded with traditional flat or round nosed bullets.

Buffalo Bore also produces a line of “heavy” .30-30 Winchester ammo designed for optimum performance on really big game like brown bears or moose. With a 190 grain bullet pushed at around 2,100 feet per second (1,860 ft-lbs of energy), this is one of the hottest .30-30 loads currently available.

Since it’s a rimmed cartridge, .30-30 Winchester is most commonly chambered in lever action and single shot firearms as well as a few handguns like the Thompson Center Contender.

In addition to the Winchester Model 1894, the Marlin Model 336 and the Savage Model 99 are both extremely popular lever action rifles available in .30-30. Henry has produced several lever action models in .30-30 (like the Henry All-Weather) as has Mossberg with the Mossberg 464, 472, and 479. Thompson Center has also produced their break action single shot Contender rifle and pistol in the cartridge for many years. Ruger also produces the Ruger No. 1 single shot in .30-30 as well.

Though it was never really a popular cartridge for bolt action rifles, Winchester produced the Model 54 in .30-30 for a time. So did Remington and Savage (and a few others) with the Remington 788 and the Savage Model 340 respectively.

Hunting With The .30-30 Winchester

In short, the .30-30 Winchester caught on because it was powerful enough to get the job done when hunting whitetail deer and black bear at short to moderate range, but still had relatively mild recoil in a lightweight and easy to carry rifle. Since most hunters east of the Mississippi very rarely take shots on deer past 150 yards, they loved the hard hitting .30-30 and didn’t really need a cartridge with a flatter trajectory for most applications. Those characteristics also made it a really good deer hunting cartridge, especially for small framed and/or inexperienced hunters.

The .30-30 Winchester remains a favorite in many parts of the United States for those same reasons. Additionally, advances in powder and bullet technology have improved certain aspects of the cartridge and made it an even better hunting cartridge in many respects.

For instance, hunters in the United States and Canada have used the .30-30 Winchester to harvest untold numbers of elk, grizzly bear, and moose over the years. Though many say it’s a borderline choice for the job (and not without reason), it will certainly work in that role with good shot placement. Additionally, the advent of much better quality controlled expansion (particularly bonded or monolithic) bullets have undoubtedly made the .30-30 Winchester more effective on really large game than it used to be.

At the same time, hunters who want to wring every last bit of performance out of the .30-30 Winchester can do so with some of the polymer tipped bullets currently available on the market.

As you can see in the table below comparing Winchester’s Super-X 150gr JHP in .30-30, Hornady’s 160gr FTX LEVERevolution in .30-30, and Nosler’s Trophy Grade 150gr Partition load in .30-06 Springfield, the Hornady load has a noticeably flatter trajectory and has over 50% more energy at 300 yards than the traditional 150gr .30-30 load. That being said, it’s still not a long range load by any stretch of the imagination and falls well short of the .30-06.

Yes, many of the more modern cartridges like the .308 Winchester and .30-06 Springfield are clearly more powerful than the .30-30 Winchester. However, the body of evidence also indicates that all of those cartridges (including the .30-30) are tremendously effective on most species of big game. Truth be told, the biggest advantage those newer cartridges have over the .30-30 is that they have a higher velocity, flatter trajectory, and a longer effective range.

If you’d like to read a more detailed discussion on the .30-06 Springfield and some of the other popular .30 caliber cartridges, read the articles below:

Realistically, hunters armed with a .30-30 have a maximum effective range of around 150-200 yards. When using a polymer tipped bullet and a scoped rifle (like a Marlin 336), it’s possible to extend that somewhat to around 250 yards or so. That’s plenty of range for most hunters though.

On the other hand, the .30-30 Winchester is not really suited for hunting situations that might require longer range shooting, such as a mule deer hunt in Arizona, an elk hunt in Colorado, or a pronghorn hunt in Wyoming.

Instead, the .30-30 Winchester thrives in the thick hunting conditions most commonly found in eastern states.

While it does have a reputation as good cartridge for a brush gun, the .30-30 isn’t particularly great at shooting through cover. Contrary to what many believe, those round nosed bullets will still deflect after hitting leaves or tree limbs. However, the cartridge is known for great performance in thick brush primarily because it has a mild recoil and is primarily available in quick handling and lightweight rifles ideally suited for fast shots on game at close range.

All of the big ammunition companies make several different loads .30-30 ammo specifically designed for hunting deer and other North American big game. Visit the link below for couple of recommendations for some of the best .30-30 Winchester hunting ammo currently available on the market.

Before we wrap up, I wanted to touch on how the .30-30 Winchester stacks up against the .45-70 Government. Those are the two most popular cartridges among hunters who use lever-action rifles in North America.

I’ve actually written a very detailed and comprehensive article on how those two fantastic lever action cartridges compare to each other. Click the link below to learn all about the pros and cons of the .30-30 Winchester vs the .45-70 Government.

Final Thoughts On The .30-30 Winchester

Don’t be fooled by the deceptively anemic performance of the .30-30 Winchester on paper. While it does indeed have its limitations, the .30-30 is an outstanding choice for hunting under the right circumstances. After all, there is a reason why so many hunters still continue to use the .30-30 Winchester: because it just works extremely well for the vast majority of hunting situations in the United States.

LeverGuns.com along with the Lyman 50th Edition (p234-236) and Hornady 10th Edition (p444-447) reloading manuals were also used as references for this article.

NEXT: .450 MARLIN: EVERYTHING YOU NEED TO KNOW