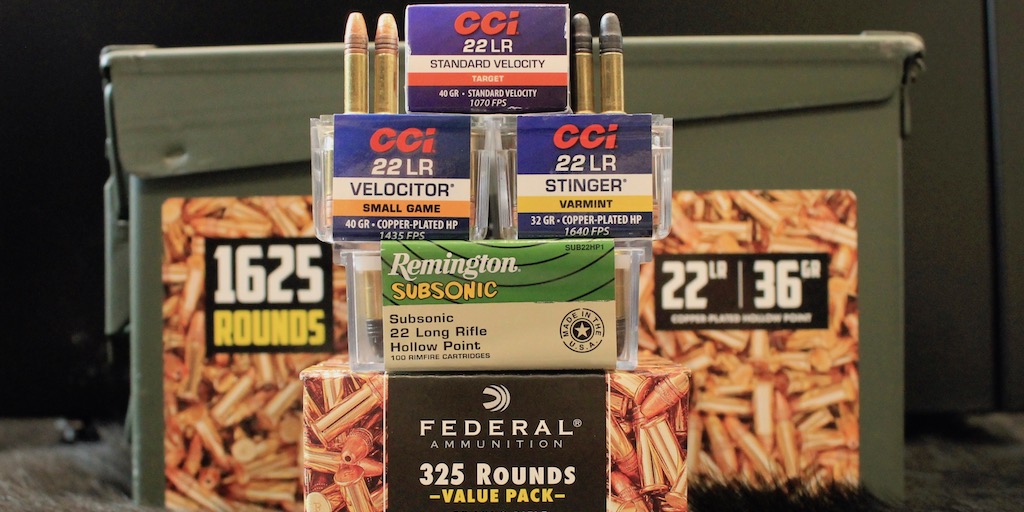 Many people love the mild recoiling .22 Long Rifle cartridge for hunting game like squirrels and rabbits as well as for target shooting and plinking with good results. Here are a few great brands of .22LR ammo that will serve you very well in those roles.

The little .22 Long Rifle is one of the most widely used cartridges in the world. It’s perfect for teaching a new shooter the fundamentals of marksmanship, hunting small game and varmints, target shooting, and just plinking off your back porch. For that reason, just about every big manufacturer like Armscor, Aguila, CCI, Federal American Eagle, Fiocchi, Remington, Sellier & Bellot, and Winchester produces several different variants of .22LR ammo for hunting small game and for target shooting.

Known for having a very mild recoil and report, the .22 Long Rifle is still a very capable hunting round. It can also be an extremely accurate cartridge in the right hands and is widely used among competitive shooters all over the world

As good as the .22 Long Rifle is though, it’s not perfect.

Additionally, while it is also capable of killing larger creatures (a shot behind the ear with a .22LR is deadly on larger animals), I don’t recommend using the .22 Long Rifle for hunting big game animals like deer, elk, or bear.

All that said though, the .22 Long Rifle is still one of the most popular cartridges in North America. For this reason, there’s a wide variety of .22LR ammo that will work extremely well for plinking, target shooting, and hunting smaller game. So, regardless of whether you’re using a Ruger 10/22, a Marlin Model 60, a Walther P22, a Ruger Single Six, a Browning Buckmark, or some other rifle or pistol, there is pretty much guaranteed to be something for everyone on the list below of the best .22LR ammo for hunting and target shooting.

In today’s post, I’m going to show you the best .22LR ammo for hunting squirrels, rabbits, grouse, and varmints as well as for plinking and target shooting. I’ll also go over the pros and cons of each individual load.

The Federal Champion copper plated hollow point is my all-around favorite choice for .22 Long Rifle ammo. I’ve used this stuff for plinking and small game hunting out of my Ruger 10/22 for many years with very good results. This ammo shoots pretty cleanly, very accurately, and produces quick kills on game without destroying too much meat.

It’s not the cheapest .22 ammo, but it’s usually very close. There are also a few other brands of .22LR ammo that are more accurate or have better ballistics on paper, but Federal Champion high velocity .22LR ammo is an overall very solid performer for a wide variety of tasks.

All things considered, it’s really hard to go wrong with Federal Champion .22 Long Rifle ammo. It’s not perfect, but it’s about as close as I think is reasonably possible and is my choice for the best .22LR ammo. Remington Golden Bullet .22 Long Rifle ammo is similar, but I’ve personally had better results with this Federal ammo instead.

Federal Champion .22 Long Rifle ammunition is often sold as a 325 round brick, but it’s also available in 3,250 round value packs or bulk packs. The Federal Black Pack is very similar, but uses a 38 grain instead of a 36 grain bullet. Especially considering the prices it’s normally available at, you should buy a few boxes right now to have on hand in case we ever run into another big ammo shortage because this is going to be among the first .22LR ammunition fo disappear off the shelves if that ever happens again.

With a blazing fast advertised muzzle velocity of 1,640fps, the CCI Stinger is one of the fastest brands of .22LR ammo currently manufactured. Indeed, this stuff is so fast that it’s marketed as hyper-velocity ammo. This load is known for producing devastating wound channels on impact. For this reason, this is my #1 recommended .22 Long Rifle varmint hunting load. It will also work very well on small game, but will probably destroy more meat than most other types of .22LR ammo.

While the CCI Stinger is a bit more expensive than many of the other .22LR choices, this is very high quality ammo. For one thing, it uses nickel-plated brass cases for improved reliability, especially in semi-automatic firearms. Additionally, this ammo has more reliable primers than is the case with most other types of .22 Long Rifle ammunition.

All in all, CCI Stinger .22 Long Rifle ammunition is a great choice is you want some really high performing .22LR ammo for hunting varmints or small game.

Federal also makes 22LR ammo in their Champion line featuring a 40 grain lead round nose bullet. I’ve also used this stuff for plinking and small game hunting out of my Ruger 10/22 with good results. In short, I like it a little better for target shooting than the 36gr Federal Copper Plated Hollow Point ammo, but I think the 36gr loading is a little better for small game hunting. Both loads will work just fine for both purposes though.

This stuff is also a little less expensive than the 36gr Federal loading. It’s still not the cheapest .22 ammo, but it’s usually very close.

If you’re a “meat and potatoes” kind of hunter who wants some reasonably priced and dependable .22LR ammo for target shooting, plinking, and perhaps even hunting small game, then the Remington’s 22 Thunderbolt ammo will probably work really well for you. With a 40 grain LRN bullet, this is especially good ammo for use at the range.

It’s not the latest and greatest stuff by any means, but this high velocity .22LR ammunition is competitively priced and should perform very well in a wide range of firearms.

If you’re looking for some extremely accurate and consistent .22LR ammo, then you should seriously consider using the CCI Standard Velocity load. Shooting a 40 grain solid point at 1,070 feet per second, it doesn’t have eye popping ballistics like some of the other loads on this list, but it’s a better choice when you want all the accuracy you can get with rimfire ammo.

This is my #1 recommendation if you want the best .22LR ammo for accuracy. However, this ammunition is also a better choice for a bolt-action rifle as opposed to a semi-automatic rifle. Since it’s a lower velocity .22LR ammo choice, it may not cycle the action on some semi-autos. That said, that’s not an ironclad rule and it will work just fine in some autoloaders, so the only way to know for sure if it will function in your rifle is to buy a box or two and test it out.

CCI Blazer .22LR ammo is about as basic as you can get. While this is indeed some of the cheapest .22LR ammo out there on a per round basis, that doesn’t mean it’s junk or low quality either. On the contrary, this rimfire ammunition has gotten high marks from shooters and hunters and is fantastic ammo for plinking and target shooting.

Since it uses a 40 grain lead round nose (instead of a hollow point) bullet, this .22 Long Rifle ammo is better suited for target shooting at the range than hunting, though it will absolutely work in that role as well. Indeed, it will probably cause less meat damage than a hollow point with similar ballistics.

Similar to the Stinger load above, CCI’s Velocitor .22LR ammo also has a really cool name and shoots a slightly heavier bullet at a slower (but still very fast) velocity. Specifically, this load uses a 40 grain Copper Plated Hollow Point at 1,435 feet per second. Like its Stinger cousin, this load produces devastating wound channels on impact. If the CCI Stinger is recommendation #1A for varmint hunting, the CCI Velocitor is #1B. It will also work very well on small game, but will probably destroy more meat than most other types of .22LR ammo.

This .22LR ammunition uses a traditional brass case and is also sometimes a little bit cheaper than the CCI Stinger. The CCI Velocitor is another excellent choice for those who want high performance .22LR ammo for hunting small game or varmints. I’d recommend purchasing a box of the Stinger and Velocitor ammo and see which one functions the most reliably and shoots the most accurately in your chosen rifle.

Do you hunt with a suppressor or just want to minimize the noise you make where you hunt or shoot? If that’s the case, then some subsonic .22LR ammo is just what the doctor ordered. With an advertised muzzle velocity of just 1,050fps, it doesn’t break the sound barrier and therefore won’t make that distinctive “crack” as it goes downrange. It’s a little bit hotter than CCI Quiet ammo, but especially when used in conjunction with a suppressor, CCI Subonic is still EXTREMELY quiet .22LR ammo.

Even though it’s not going nearly as fast as some of the other .22LR ammunition choices on this list, the 40 grain hollow point used in CCI Subsonic .22 LR ammo is still quite effective on small game at close range. Depending on the exact firearm, this may or may not cycle in a semi-automatic rifle like the Ruger 10/22. If that’s the case, it should still shoot accurately but you’ll just have to manually cycle the bolt between shots.

Remington also makes a line of subsonic .22LR ammo. This load uses a slightly lighter 38 grain HP bullet, but has the same advertised velocity of 1,050 fps as the CCI ammo above. Even so, this is still very quiet ammo that’s another good choice for hunters and shooters who want to minimize the noise their .22 produces.

Like the CCI Subsonic ammo, Remington Subsonic .22 LR ammo should still be effective on small game at close range and it may or may not cycle in a semi-automatic rifle. If that’s the case, it should still shoot accurately but you’ll just have to manually cycle the bolt between shots. I’d recommend purchasing a box of the CCI and Remington subsonic ammo and see which one functions the most reliably and shoots the most accurately in your chosen rifle.

For what it’s worth, this subsonic .22LR ammo functions well in my Ruger 10/22 and shoots very accurately. It’s also MUCH quieter than typical ammo, even without a suppressor.