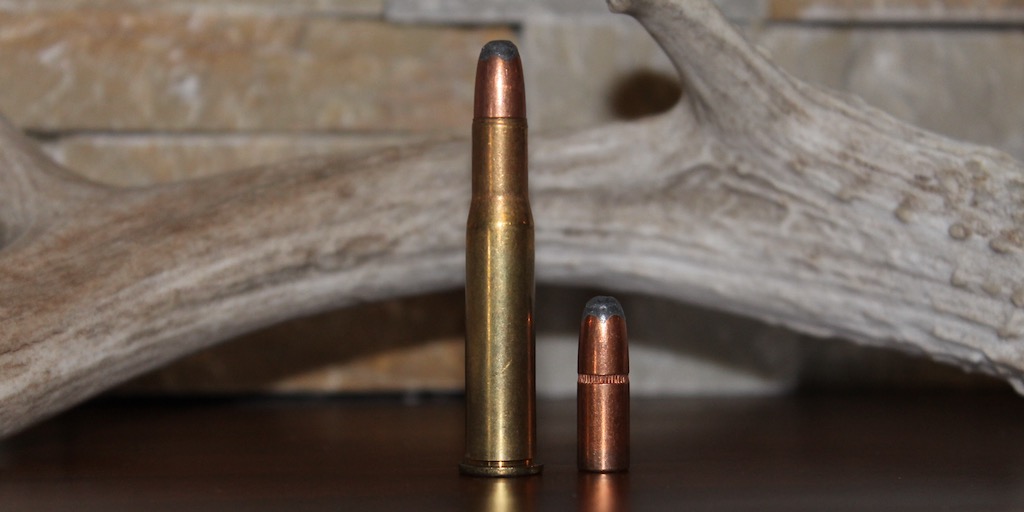 Many people still use the venerable .30-30 for hunting deer and many other species of big game with excellent results. Here are a few great brands of .30-30 ammo that should serve you well next time you hit the woods.

Though the cartridge has been around since the 1890s, the legendary .30-30 Winchester is still an excellent deer hunting cartridge. In fact, as is the case with other older cartridges like the .45-70 Government, .30-30 ammo is now even more effective for hunting many species of big game than ever due to advances in smokeless powder and bullet technology that have occurred over the last century.

Known for its manageable recoil in lightweight and easy to carry rifles and reliable performance at short to medium range, hunters all over the United States still utilize the .30-30 for deer hunting in thick conditions. The .30-30 Winchester is also a very effective rifle cartridge on other species of big game like black bear, feral hogs, and mountain lions.

Fortunately, the major ammunition manufactures like Barnes, Fiocchi, Federal Premium, Hornady, Nosler, Prvi Partizan, Remington, Sellier & Bellot, and Winchester currently offer multiple varieties of .30-30 factory loads specifically designed for hunters. For that reason, regardless of whether you’re using a Marlin 336, a Winchester Model 94, a Savage Model 99, a Thompson Center Contender handgun, or something else, there is something for everyone on the list below of the best .30-30 Winchester ammunition for hunting.

In today’s post, I’m going to show you the best .30-30 ammo for hunting and go over the pros and cons of each individual load.

If you’re looking to squeeze every bit of performance out of the .30-30 Winchester, then go with the Hornady Leverevolution line of ammo. Available with either a 160 grain FTX bullet or a 140 grain MonoFlex bullet (both of which have a flexible tip), this line of ammo is still safe to use in a lever action rifle with a tubular magazine, but those pointed (spitzer) bullets have a higher ballistic coefficient than traditional flat tipped or round nosed bullets.

Though it doesn’t transform the .30-30 Winchester into a long range cartridge, this load does have a flatter trajectory and better downrange performance than just about any other .30-30 Winchester ammo out there.

The MonoFlex bullets are also made of a 100% copper alloy, which also makes them a great choice if you’re a California resident and need lead free .30-30 ammo for hunting.

Before going hunting with this rifle ammo though, make sure you spend some time at the range with it to ensure it functions reliably and shoots accurately in your rifle. If it does shoot well in your hunting rifle, then this is my pick for the best 30-30 ammo for a Marlin 336, a Winchester 94 30-30, or any other lever action or bolt action rifle chambered in that cartridge with a tubular magazine.

If you’re a “meat and potatoes” kind of hunter who wants some reasonably priced and dependable 30-30 ammo for hunting deer, feral hogs, and black bear then the Core Lokt 170 grain soft point by Remington Ammunition will probably work really well for you (it’s also available in a 150 grain jacketed hollow point load which is also very good).

It’s not the latest and greatest stuff by any means, but this .30-30 rifle ammunition by Remington has been around for a long time and countless hunters have successfully used Core Lokt ammo to take just about every species of big game in North America.

Winchester’s Super X line of ammo is a great choice for hunters who want some reasonably priced, “no frills” .30-30 ammo. It’s not a sexy or exciting load, but it will really get the job done when hunting deer, black bear, and feral hogs. In addition to the 170 grain round nose .30-30 load pictured above, it’s also available in a 150 grain jacketed hollow point (JHP) load. Buy a box or two of these bullets, sight your rifle in at 100 yards, and it will probably serve you well as a great hunting load for years.

The .30-30 Winchester is an outstanding cartridge for deer hunting and many of the big ammunition companies make special lines of ammo designed specifically for hunting whitetail deer. Federal’s Non-Typical Whitetail is a great example.

If you’re looking for the best .30-30 ammo for deer hunting, then Federal Non-Typical Whitetail is a really good choice. Place your shot where it needs to go and no deer will run very far afterwards.

Federal’s Fusion line of ammunition utilizes a bullet with a molecularly fused jacket and a pressure-formed core for a more durable construction than many other comparable bullets. The goal was to build a very durable bullet that would offer more controlled expansion and high weight retention. So, this ammunition

They successfully accomplished those goals and Fusion ammunition is known for being very robustly constructed. In general, this .30-30 ammo probably won’t deliver quite as much expansion as stuff like Federal Non-Typical, Winchester Super X, or Winchester Deer Season XP ammo.

Available in both 150gr and 170gr bullet weights, this ammunition is acceptable for hunting a wide range of game. While both will work on thin-skinned game like deer, the 150gr bullets are best suited for that sort of hunting and the 170gr bullets are better for tougher game like feral hogs and black bear. Heck, those 170gr bullets will also work if you want to use your .30-30 for elk or moose hunting.

This is also a great hollow point bullet for those who want to hunt moose with the .30-30. It’s also 100% copper, which makes this another ideal brand of .30-30 Winchester hunting ammunition for use in states like California that that don’t permit the use of lead bullets.

If you’re planning on taking your .30-30 Winchester deer hunting, then Winchester’s Deer Season XP line of ammunition is another interesting choice. It sports a polymer tip similar to the Hornady Leverevolution, but it’s designed specifically to compete with popular deer hunting ammo like the Hornady American Whitetail, Federal Power-Shok, Federal Fusion, Remington Core-Lokt, and the Winchester Ballistic Silvertip in terms of accuracy, price, and outstanding terminal performance.

So, not only is this some very reasonably priced .30-30 ammo, but it also has a very good reputation for producing a giant wound channel and minimizing the distance deer run after being hit. In fact, this would be one of my other top recommended brands of 30-30 ammo for deer hunting.