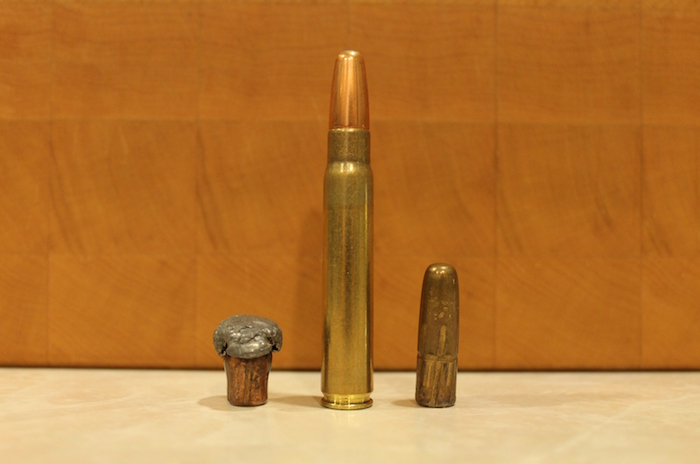 Even though it may be one of the world’s best all-around big game hunting cartridges, the 9.3x62mm Mauser is still an incredibly underrated round.

Though the 9.3x62mm Mauser might seem underpowered on paper, those numbers don’t tell the whole story. It’s rather popular among European and Africans, but relatively few hunters in the United States utilize this outstanding cartridge. Instead, Americans usually rely on the more common .375 H&H Magnum when hunting dangerous game in Africa.

While the .375 H&H is an outstanding cartridge, the 9.3×62 can provide 85-95% of the power (dependent on the exact load) with less recoil and with the added bonus of being able to fit in a rifle with a standard length action instead of the magnum length action required by the .375 H&H. This makes the rifle shorter, lighter and cheaper overall and a great choice for hunting big game all over the world.

In this article, I’m going to discuss the merits of the 9.3x62mm Mauser and explain why it’s such an effective rifle cartridge for hunting big game all over the world.

Before I really get started, please understand that this article is not about bashing the .375 H&H. It is an excellent cartridge and is very widely used the world over for good reason: it works. This article is merely trying to describe some of the advantages of a less popular, but comparable cartridge and why it may be appropriate to explore the 9.3x62mm in further detail.

Designed by Otto Bock in 1905 for the Mauser Model 1898 bolt action rifle, the 9.3x62mm soon became very popular among German settlers in Africa. The cartridge rapidly acquired a reputation for providing sufficient power to cleanly take all species of plains and dangerous game in Africa. This, combined with the fact that it was available in a reasonably priced magazine fed rifle, led to an explosion in popularity among hunters in Africa and Europe.

Modern 9.3x62mm factory loads generally fire a 220-320gr bullet at muzzle velocities between 2,200 and 2,650 feet per second. However, a 286 grain bullet at approximately 2,350 feet per second is probably the most popular load. This load produces over 3,500 foot pounds of energy and offers a slight edge in performance compared to the .35 Whelen.

The 9.3x62mm can also work as a great cartridge when hunting the Big 5 like Cape Buffalo and elephant. It’s also a nice choice for other species dangerous game like hippopotamus or Water Buffalo.

Though some areas, like Tanzania and certain provinces in South Africa, require a minimum bullet diameter of .375 for dangerous game hunting (the 9.3mm is .366 caliber), Mozambique has no minimum caliber and Zimbabwe has a minimum caliber of 9.2mm.

While it is the absolute smallest cartridge I would recommend using on buffalo and elephant, the 9.3x62mm will do a great job when using an appropriate controlled expansion or solid bullet that is placed properly. Indeed, many thousands of buffalo and elephant have fallen to the venerable 9.3x62mm over the last century. That being said, the cartridge is not the best choice for following up a wounded buffalo or elephant in heavy cover, but then again, neither is the .375 H&H.

One of the reasons that the 9.3x62mm cartridge (and the 7mm Mauser for that matter) performs so well on large and dangerous game is because it penetrates deeply and consistently. This is partly due to the fact that the bullet has a high sectional density (a measure of the ratio of the diameter of a projectile to its mass). All other things equal, a heavier projectile of a given caliber will be longer and therefore have a higher sectional density and consequently penetrate deeper than projectiles with a lower mass and sectional density. As an example 286 grain and 293 grain 9.3mm bullets have sectional densities of .305 and .312 respectively. This compares favorably to 270 grain and 300 grain .375 caliber bullets (the most popular weights for that caliber) which have sectional densities of .274 and .305 respectively.

Another advantage that the 9.3x62mm has is the relatively light (for a medium bore dangerous game rifle) recoil that it generates. While the exact amount of recoil generated depends on the load used (more powerful loads generate more recoil) and the weight of the rifle (heavier rifles have less recoil), the 9.3x62mm generates between 65-85% of the recoil of the .375 H&H. For comparison, this is only 20-30% more recoil than a typical rifle chambered in .30-06 Springfield.

A manageable amount of recoil is very important for hunters, especially those who are smaller framed or who are just more sensitive to recoil. Lighter recoil typically increases accuracy on the initial shot as well as enabling the hunter to make a rapid follow up shot. As has been said over and over again, where an animal is hit is much more important than what it is hit with, so an accurately placed 9.3mm bullet is much more effective than a poorly placed .375 or .458 caliber bullet.

Perhaps the biggest advantage of the 9.3x62mm over a .375 H&H is the significantly lower price of rifles chambered for it since the cartridge can fit in a standard length action. Among other manufacturers, Sako, Steyr, and CZ all produce rifles chambered in 9.3x62mm. You can also still purchase a current production Mauser rifle in the cartridge.

Additionally, there is a large selection of high quality ammunition available for the 9.3x62mm. Among others, Nosler, Hornady, Lapua, Norma, Federal, Barnes, Remington, Sellier & Bellot, Woodleigh, Swift, A-Square, and Prvi Partizan all produce loaded rifle ammo for the 9.3×62. Though it’s possible to find other bullet weights, 285 grain and 286 grain bullets are by far the most popular.

Those same companies also sell high premium grade 9.3mm bullets like the 232 grain and 286 grain Oryx from Norma, the 250 grain AccuBond and the 286 grain Partition from Nosler, and the 286 grain Swift A-Frame, so hand-loaders shouldn’t have trouble making a great performing load.

Furthermore, the German munitions company RWS also produces excellent quality 9.3mm bullets and ammunition, but they are very expensive and hard to come by in the United States. These manufacturers produce a wide variety of bullets that range from light, rapidly expanding bullets for use on white tailed deer to heavy, controlled expansion soft point and solid bullets for elephant and cape buffalo hunting.

With a premium rifle chambered in 9.3x62mm, one could legally and ethically hunt virtually every species on Earth from white tailed deer to elephant. I cannot think of many other calibers that would allow a hunter to pursue such a wide variety of species without breaking his or her shoulder or bank account while doing so.

However, in addition to the previously mentioned shortcomings against stopping a dangerous game charge, the 9.3×62 is not a flat shooting cartridge in the mold of the 7mm Rem Mag or .300 Win Mag cartridges. So, it’s not really suitable for very long range shots over about 300 yards like one might encounter on a Marco Polo Sheep hunt. Other than those few exceptions, this caliber fits the bill nicely for the vast majority of big game.

In short, the 9.3x62mm is a fantastic cartridge that can fill a number of different roles virtually anywhere in the world from a Scandinavian moose hunt to a cape buffalo hunt in Zimbabwe. Especially for a hunter who only wants one rifle to hunt a wide variety of big game, the 9.3×62 fills that need admirably. John “Pondoro” Taylor summed the 9.3x62mm up pretty well when he said in his book African Rifles and Cartridges that “There isn’t really a great deal to say about it. Everybody found it so generally satisfactory that there wasn’t anything to start a discussion.”

Is it a perfect cartridge? No, but I think the 9.3x62mm comes about as close as you can reasonably expect to get with a “one size fits all” solution.

Do you have a rifle chambered in 9.3x62mm Mauser that you’re just itching to take on a hunt?

The Lyman 50th Edition (p316) and Hornady 10th Edition (p700-702) reloading manuals, Africa’s Most Dangerous by Kevin Robertson, African Rifles and Cartridges by John Taylor, The Reloader’s Nest, and The African Hunter were all used as references for this article.

NEXT: THE 375 RUGER: AN UP AND COMING DANGEROUS GAME CARTRIDGE

7 thoughts on “The 9.3x62mm Mauser: An Underrated And Underappreciated Big Game Hunting Cartridge”

Scroll back to top
221shares