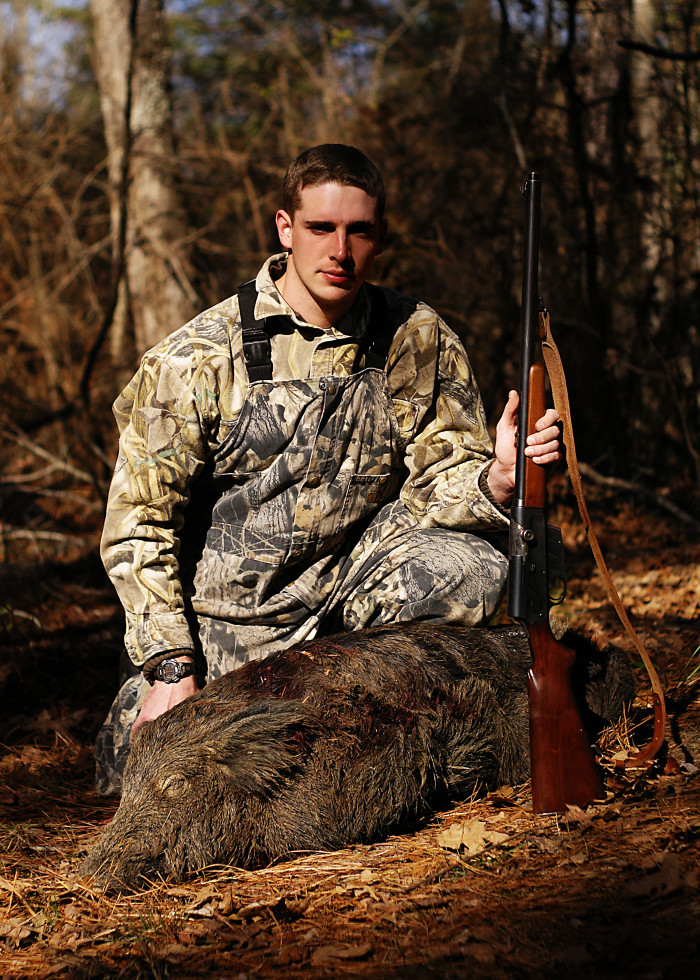 Today is a repost of one of my very first entries on this blog: the story my successful stalk of a feral boar. Some of you who may have started following the blog more recently may not have had the opportunity to read this story and I’d like to share it with you all. I hope you enjoy it!

Sometimes conditions are just not in your favor during a hunt. You may have an ideal set up at a location that regularly draws large numbers of deer, but if the wind is blowing from the wrong direction, you are wasting your time at that location. In fact, you may actually be doing more harm than good by trying to push a bad situation. You cannot control the weather or the wind. At this point you basically have two choices: do nothing and go home unsuccessful, or change your strategy and try to make something happen. Like many others, I’ve dealt with that kind of situation more than once during my time as a hunter. Below is an example of a time I was able to turn difficult circumstances into success.

This particular morning I was hunting in the usually reliable stand at the north end of my family’s land. This was the stand where several years earlier I shot my first trophy buck. It was a beautiful, cool, sunny day with temperatures in the mid 40s. The only problem was that the wind was out of the south, which was blowing my scent directly across the clearing to the feeder. After a couple of hours of hunting, I finally decided that I was wasting my time and gave up hunting that stand. It was the last day of the weekend hunt I was on with my family and I decided to make a slow walk back to the cabin through the woods.

The cabin is located at the southern end of our property and was about a half mile away from where I was hunting. That gave me the advantage of walking into the wind as I headed back. I made a slow, detouring route through the thick woods to the west of my stand as I slowly hiked away from the stand. This area consisted mainly of pines inter-spaced with numerous oak trees with sporadic patches of brush. The terrain also sloped down into a system of creek beds. I moved through the woods carefully, mindful of the fact that I was moving through an area of our land where many deer and hogs liked to reside. I descended into the lowest of the creek beds and after encountering no game, started climbing the gradual slope uphill back to the cabin to the south.

The woods were very quiet that morning. Since it was the end of December, there was a thick carpet of leaves on the ground. I knew I couldn’t hide the sound of my movement, so I decided to try and sound as little like a human as possible as I walked through the leaves. I would take a few steps at a time and then pause for a few seconds before continuing to move. After moving several hundred yards, I heard something moving ahead of me and my heart started beating faster.

I continued at a slightly slower pace as I searched the woods ahead of me for the source of the noise. About 50 yards ahead of me, a solitary hog emerged from some brush moving from my left to right. He was moving at a steady, but not fast pace as he casually rooted around in the leaves looking for something to eat. Since the wind was blowing towards me, he could not smell me and acted as though he didn’t have a care in the world. I took a few steps towards the closest tree so I could use it as a rest for my shot. As I moved, he glanced at me and I froze.  Unconcerned, he went back to searching the ground for food and continued on his way.

I was carrying my new Remington Model 81 rifle chambered in .35 Remington. This was the rifle I replaced my old Model 8 in .32 Remington with after I surprised a group of hogs at dusk several years earlier.  Apart from the different cartridge, the rifle was almost identical to the Model 8.

Upon reaching the tree, I used it for a hasty rest and quickly took off the safety. I looked through the rear sight, covered up the hog’s right shoulder with the front sight bead, and started to squeeze the trigger. He was standing almost exactly broadside to me when the trigger broke. The rifle fired with a flat sounding blast and the stock pushed back into my shoulder from the stout recoil of the powerful cartridge. The 200gr soft point bullet slammed into his right shoulder and with a brief squeal, he fell onto his side and began twitching. I ran up to him and fired a finishing shot through the top of his spine down into his chest.

The hog was a medium sized boar that weighed out at just over 100lbs. He was not a giant hog or trophy book animal by any means. However, he was certainly a much appreciated end to a hunt and provided plenty of pork chops. His thick coat of coarse, black hair still glistened with water. Evidently, I had encountered him just minutes after he finished rolling in a hog wallow. My first shot hit him slightly high on the shoulder, clipping the tops of both lungs, stunning his spine and leaving a quarter sized exit wound on his left side. That was exactly the sort of performance I expected out of the .35 Remington.

In addition to the .35 Remington, just about any of the cartridges below would have also worked extremely well for that sort of hunting.

Check the wind before and during your hunt. It doesn’t cost much to get a bottle of wind checker and it’s very simple to use. I probably hunted too long in that stand that morning. When the wind is blowing the wrong direction, you are wasting your time hunting that location. Any animal that does appear will quickly smell you and promptly leave. Using scent eliminating sprays will help to a certain degree. However, even bathing in scent block won’t work if the wind is blowing in exactly the wrong direction.

Do not be afraid to shoot an animal more than once. Many hunters, especially hunters in North America, are guilty of “admiring their shot.” Also, some are very reluctant to shoot an animal a second time for fear of “ruining meat.” Yes, finishing and back-up shots result in some lost meat, but not nearly as much lost meat as a wounded animal that gets away results in.

Use a rest to shoot from whenever possible. Hitting a relatively small target at any distance over about 10 yards is pretty difficult when shooting offhand. Using something as simple as a tree or your sling for support makes a big difference in accuracy.

I was fortunate enough that my cousin, who is a professional photographer, was accompanying me on this trip. She took probably the best quality trophy photo I’ve ever had during all of my years as a hunter. Invest in a good camera and learn how to use it. Excellent trophy photos will only improve the quality of a hunt and your memories of it.

3 thoughts on “The Wind In My Face”