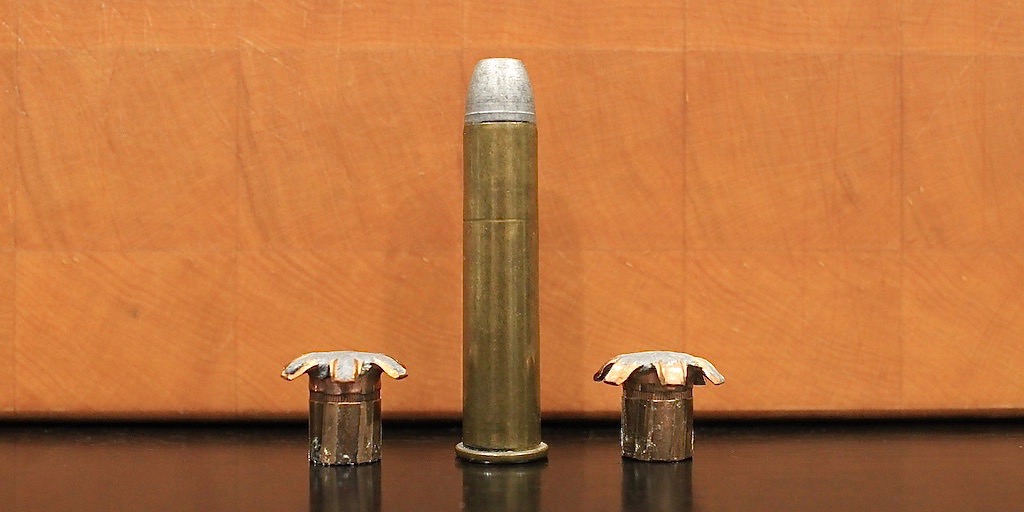 Check out this article about the history, shortcomings, and recommended uses for the .45-70 Government.

Today I’ll be discussing a cartridge that, while popular in certain circles, does not get a lot of attention these days: .45-70 Government. The .45-70 delivers bone crushing power at close range, but is difficult to shoot accurately at longer ranges because its big, slow moving bullets have a very steep trajectory.

So, while the .45-70 is as American as apple pie, the .30-30 Winchester, the .30-06 Springfield, and the .45 Colt, only a relatively small percentage of dedicated hunters and shooters use it these days.

Note: some of the links below are affiliate links. This means I will earn a small commission (at no extra cost to you) if you make a purchase. This helps support the blog and allows me to continue to create free content that’s useful to hunters like yourself. Thanks for your support.
Additionally, I recorded an entire podcast episode on this exact subject. If you’d rather listen than read, you can either just press play below or click the appropriate link to download the episode through your preferred service.

Designed in 1873 for use in the single-shot “Trapdoor” Springfield, the .45-70 (originally known as the .45-70-405) fired a 405 grain, .45 caliber bullet propelled by a powder charge of 70 grains of black powder. This original black powder load pushed a cast lead bullet at a velocity of about 1350 feet per second. With a muzzle energy of about 1600 foot pounds, this cartridge was one of the most powerful loads available at the time and was effectively used by the Army through the Indian Wars in the late 1800s. The U.S. Army continued to use this rifle and cartridge in limited numbers through the Spanish-American War and Philippine Insurrection in the late 1800s and early 1900s.

Due to excellent the reputation it earned while in use with the Army, the .45-70 quickly became popular among sportsmen in the United States. In response to significant demand for good rifles chambered in the cartridge, the major manufacturers began building rifles specifically for the .45-70. Soon, hunters had access to quality rifles and repeaters such as the Remington Rolling Block, the Remington-Keene, the Sharps 1874 “Buffalo Rifle,” the Winchester-Hotchkiss, Winchester Model 1885 “High Wall,” and the Winchester Model 1886. Even when using the relatively simple solid lead bullets available at the time, the .45-70 was an extremely potent load when used on whitetail deer and black bear and still effective on the larger, tougher, and sometimes more dangerous species like moose, grizzly bear, and bison.

Using modern, smokeless powder, most of the ammunition manufacturers currently produce a wide variety of loads of varying power for the .45-70. What load you should use depends on the rifle you intend to use it in. If you have an older rifle such as a vintage Trapdoor Springfield or a Winchester Model 1886, you should avoid modern ammunition (especially anything labeled “Magnum” or “+P”) and instead stick to low pressure loads that mimic the original performance characteristics of the round. However, most modern rifles, such as the Marlin Model 1895, the Ruger Number 1, or a converted Siamese Mauser, can handle increased pressures and there are several loads in production that have significantly improved the performance of the original load.

As just a small sample of these more modern loads that improve upon the original factory load, Federal Premium ammunition makes a load firing a 300gr Power-Shok at 1850 feet per second, generating a 2280 foot pounds of energy at the muzzle. Hornady produces the “LEVERevolution”, which has a pointed, flexible, polymer tip which improves the ballistic coefficient of the normally flat tipped bullet. The 325 grain bullet has an advertised muzzle velocity of 2050 feet per second and a muzzle energy of 3032 foot pounds. Buffalo Bore produces one of the hottest .45-70 loads available with a 405 grain jacketed flat nose bullet propelled at 2000 feet per second for a tooth rattling 3597 foot pounds of muzzle energy.

For a more detailed discussion on .45-70 Government hunting ammunition, read this article:

Combined with modern bullet construction, these enhanced loads dramatically improve the performance of the .45-70 on virtually all game species when compared to the original black powder load. This allows the hunter to ethically take game at longer ranges and still consistently penetrate deep enough to reach the vitals of the animal for a quick and ethical kill.

While the .45-70 is a very accurate round, it is difficult to shoot at longer ranges because the slow velocity and low ballistic coefficient of the bullet, even when using modern bullets such as Hornady’s “LEVERevolution,” combine to produce a pretty steep trajectory. At ranges past about 200 yards, precise range estimation and applying the proper hold over become extremely important. For instance, using the ballistics of the original black powder .45-70 load, a bullet will drop nearly 50 inches between 350 and 400 yards! For this reason, long range shooters using cartridges like the .45-70, such as buffalo hunters back in the late 1800s, used “tang” or “ladder” iron sights with Vernier scales that allowed for very precise elevation adjustments. As long as he estimated the range correctly, a skilled marksman using a high quality rifle and sight could accurately hit targets out past 1,000 yards using the cartridge.

Due to these constraints, few modern hunters use the .45-70 at ranges past 200 yards. Fortunately, this cartridge excels at short ranges where the heavy, slow moving bullets deliver the bone crushing power and deep penetration necessary for hunting large, tough animals such as moose and grizzly bear. At the same time, the low velocity bullets do not produce large amounts of ruined, blood shot meat on thin skinned animals such as deer that high velocity cartridges do.

Another advantage of the .45-70 is that most of the rifles chambered for the cartridge are short barreled lever action rifles like the Marlin Model 1895 and the Henry .45-70. These rifles are often easy to carry, whether on foot or on horseback, and are quick to mount and fire. For these reasons, the .45-70 is an ideal cartridge for hunting deer, black bear, feral hogs, and other big game in thick woods or heavy cover where short range shots (>100 yards) are common.

In addition to use on North American game, the .45-70 can also be a very effective cartridge for an African Safari. While it would not be my first choice for the longer range shots that are sometimes encountered in areas like the Kalahari Desert or Serengeti Plain, the cartridge shines when taking shots in the thick bushy conditions often encountered in the Lowveld or Mopani Bush areas common in many parts of Africa. Using high quality soft point bullets, there is no plains game animal that I would hesitate to use the cartridge on at short range. Even very large animals like the eland should present no problems as long as a heavy for caliber, controlled expansion bullet is used and placed appropriately.

While I know it has been done before, I would be very cautious about using the .45-70 on thick skinned dangerous game like buffalo and elephant. For one thing, even when using very high pressure loads designed for modern rifles, the cartridge only produces between 3,000 and 3,600 foot pounds of energy at the muzzle, which falls short of the legal minimum energy requirement of some countries for use on dangerous game. Additionally, at .204, .238, and .276 respectively, the 300, 350 and 405gr bullets most commonly used in .45-70 fall short of the commonly recommended minimum sectional density of .300 to reliably penetrate deep enough to reach the vitals on a buffalo or elephant.

For a more detailed discussion on hunting cape buffalo with the .45-70 Government, read this article:

Read This Before Hunting Cape Buffalo With The 45-70 Government

As a remnant from a bygone age in American history, there are few other cartridges that have as long and storied of a history as the .45-70. While it certainly has its limitations, the .45-70 Govt is still an extremely effective cartridge when used under the proper conditions. There are few modern cartridges that can match balance of power and portability that the .45-70 offers.

Though it’s not usually thought of as a “brush gun”, the AR platform also lends itself well to that sort of hunting, especially when chambered in a cartridge more powerful than the .223 Remington. Fortunately, there are several very good rifles chambered in .450 Bushmaster, .458 SOCOM, and/or .50 Beowulf these days. All of those cartridges are devastating at short range and are available in compact and easy to handle rifles.

To learn more about some more modern cartridges that are comparable to the .45-70 Govt in terms of power, but fit in an standard AR platform, read the article below:

450 Bushmaster vs 458 SOCOM vs 50 Beowulf: Battle Of The Big Bore AR Cartridges

19 thoughts on “The .45-70 Government: Bone-Crushing Performance From An Old School Lever-Action”

Scroll back to top
419shares