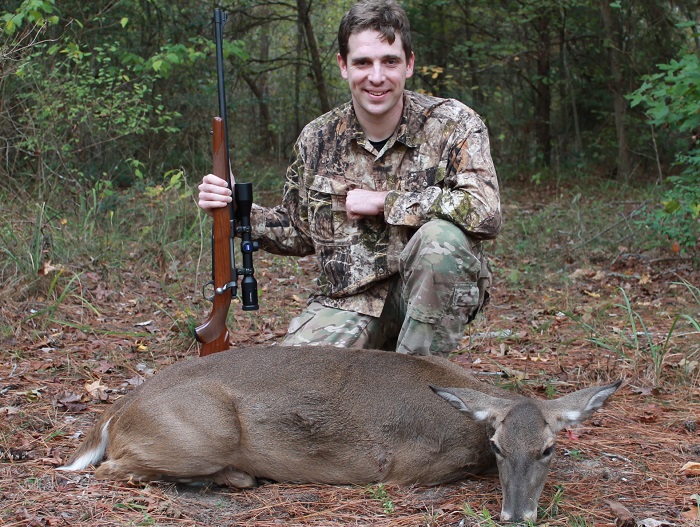 Keep reading to get the details on how my 2015 east Texas deer hunting season opening weekend went.

I was very excited for this trip up to my family’s land in east Texas because, since I joined the Army and left Texas, I haven’t been able to go hunting during the opening weekend of deer season there in years. Unfortunately, the opening weekend of the Texas deer hunting season this year coincided with a couple days of terrible weather in east Texas. We were subjected to several inches of rain combined with high winds, which meant that the deer weren’t moving much.

Because of that, we spend several cold, wet, and boring hours sitting in our stands on Saturday. Not only did my dad and I fail to see anything on during the day, but our trail cameras weren’t recording any deer movement at night either. Hunters in the surrounding area were also telling the same story, which made us hopeful that things would really pick up on Sunday and Monday when the weather improved.

The weather Sunday was much better. Though it was still pretty windy, it had stopped raining, temperatures had dropped by 10-15 degrees, and the skies were clear. I didn’t see any deer that day, my father saw a group of six does and fawns along with a small eight point buck that morning.

Since Monday was the last day of our hunt, I decided to change stands. Monday morning dawned with cool temperatures, clear skies, and with light winds out of the northeast. My decision to change stands paid off and I was greeted with the sight of a large group of deer visiting the feeder shortly after first light.

Around 6:30am, I noticed movement in the woods to the north of the feeder. The shapes quickly materialized into several deer making their way towards me. They were led by a large doe who boldly sauntered through the woods and circled downwind of the feeder. Catching the scent of fresh corn, she turned and made a beeline for her waiting breakfast.

She was followed by two smaller does accompanied by several fawns. With hunger overcoming caution, the group of deer quickly started eating. Meanwhile, I sat in my tree stand as quiet and still as if I were a part of the tree. With my scent being blown away from them, the deer detected no signs of danger and quickly settled into eating their morning meal.

While their attention was completely focused on eating, I slowly and carefully readied my rifle, taking aim at the large doe. After she moved clear of the others and offered me a perfect broadside shot, I squeezed the trigger. The silence of the morning was shattered by the blast of my rifle (a Ruger M77 in 9.3x62mm Mauser) and a 258gr H-Mantel bullet slammed into her right shoulder.

Mortally wounded, she staggered at the shot and ran awkwardly off to the north. The doe did not make it far and expired within sight of my stand. I was wearing a Solvid head camera mount at the time and captured the entire hunt on video, which you can see below.

As you can see, my Texas deer hunting season started off on a great note. This doe weighed 124 pounds on the hoof and, combined with the doe I shot last month in Washington, I’ve got a full freezer!