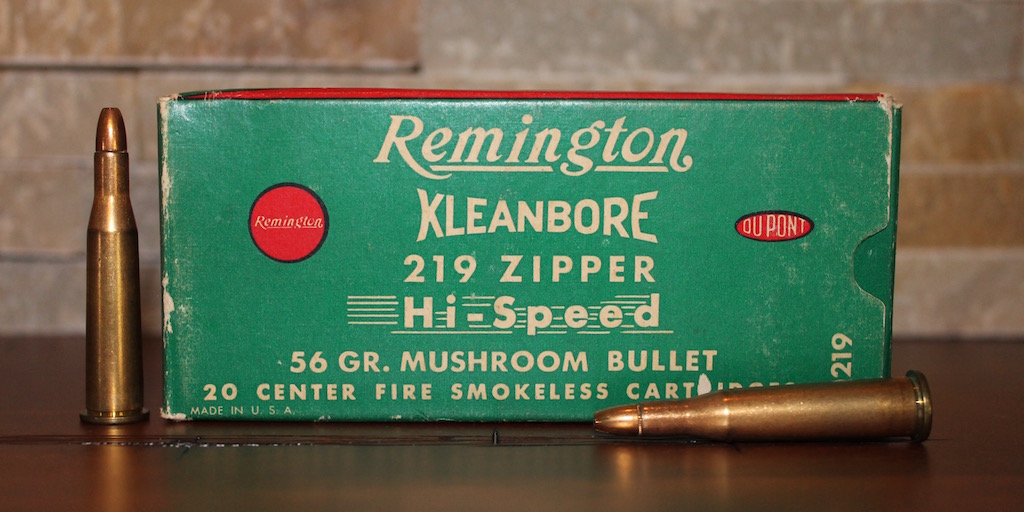 Why didn’t the .219 Zipper catch on with the hunting community?

Many hunters have probably never heard of the .219 Zipper cartridge. After all, it enjoyed a relatively short production lifespan and was rapidly pushed aside in favor of hotter cartridges like the .220 Swift and .223 Remington.

However, even though it never quite lived up to expectations, the .219 Zipper is a useful cartridge with a very interesting history.

In today’s post I’m going to explain to you why the .219 Zipper was originally built and why it ultimately never caught on with American hunters.

The story of the .219 Zipper actually begins in 1932 with the development of the .22 Hornet and its introduction in the Winchester Model 54 bolt action rifle. After World War I ended, the staff at Winchester Repeating Arms noted a shift in the desires of the shooters who were trained in the use of the bolt action rifle as a result of their military service.

Though Winchester dominated the lever-action rifle market at the time, the company could sense the ground shifting beneath their feet. As a result, Winchester scrambled to produce a bolt-action rifle chambered in the .30-06 Springfield cartridge to keep up with the changing times. They accomplished that goal with the Model 54 rifle in 1925.

The .22 Hornet, first chambered commercially in the Model 54 in 1932, was a mild-mannered cartridge. Propelling a 45 grain bullet at 2,690 fps, the .22 Hornet quickly became popular with eastern hunters because of its good medium range ballistics and non-existent recoil. The mild report of the cartridge also endeared it with local farmers.

These ballistics also made the Hornet useful for game up to the size of coyotes out to about 200 yards. The Hornet also had a reputation for fine accuracy resulting from the cartridge itself as well as the high quality rifles it was available in.

Winchester rolled out the .220 Swift in the Model 54 rifle starting in 1935. With the ability to propel a 48 grain hollow point bullet at the incredible velocity of 4,110 feet per second, the Swift could double the maximum range of the .22 Hornet and made the caliber a better, though still somewhat controversial, choice for taking deer sized game than the 22 Hornet (if the shooter was disciplined with shot selection).

Both of these calibers were flexible and popular enough to survive the test of time and both still inspire a strong following among US shooters. The Hornet is also still quite popular with European shooters.

So, in order to give their dedicated lever action shooters a hot varmint cartridge comparable to the Hornet and Swift, Winchester developed the .219 Zipper. Basically, the cartridge was a .30-30 Winchester cartridge necked down to handle a .224” diameter bullet. The original load of a 56 grain bullet a 3,110 feet per second was quite respectable and Winchester rolled out the new cartridge in the Model 64 rifle in 1937.

First, they based the Model 64 lever action on the original Model 1894 rifle. As a result, it suffered from the same top ejection handicap that prevents the user from mounting a scope low over the centerline of the bore. So, the Model 64 was essentially an optically handicapped a varmint rife only useful out to about 100 yards, which was as far as most shooters could accurately aim with the original iron sights.

Second, the lever action rifles were never able to achieve the extreme accuracy enjoyed by bolt action rifles. Since the .22 calibers using bullets available during that day and age were not really suitable or legal in many areas for use on deer size game, that spelled the eventual doom for the little .219 Zipper.

Third, the Model 64 rifle sported a 26” barrel. This was great for wringing out as much velocity as possible from the sloped shouldered case, but the resulting thin barrel ended up being whippy and just not that accurate.

Fourth, the bullet itself also presented a problem for the .219 Zipper. The Model 64 had a tube magazine which required the bullets to have a flat tip. Since the bullets in a tubular magazine are stacked tip to primer, it’s possible that the recoil produced by firing could cause a pointed bullet (also known as a spire point or a spitzer bullet) to detonate the primer of the bullet in front of it.

Winchester developed the .219 Zipper well before the introduction of the soft pointed polymer tipped bullets shooters have access to today, so the original .219 Zipper ammunition used a flat tip 56 grain hollow point bullet. This reduced the ballistic coefficient and handicapped the down range performance of the bullet.

All that being said, the .219 Zipper itself was inherently accurate. The caliber performed quite well and was very popular when chambered in a nice solid single shot rifle. Indeed, it even inspired many wildcat variations. This includes the .219 Donaldson Wasp, which was a very popular benchrest competition winner for many years, as well as the .219 Zipper Improved that P.O. Ackley created.

Unfortunately, Winchester’s great idea lost its luster and rather quickly faded from the scene of factory chambered calibers. The start of WW II spelled the end of the Model 64 rifle and Winchester ceased production in 1941 with only 861 guns sold. Winchester stopped production of factory loaded .219 Zipper ammunition and Remington following shortly thereafter. Today, an original factory loaded box of shells is a highly sought after collectors item.

However, the cancellation of the Model 64 did not mean the end of this potentially successful caliber. Marlin produced a version of their highly successful Model 336 “Sporting Carbine” chambered for the .219 Micro-Groove Zipper starting in 1955. The Marlin rifle corrected a couple of the problems with Model 64, namely shortening the barrel length from 26″ down to a 21”. That change from a long, whippy barrel to a shorter and stiffer one resulted in a big step up in accuracy. Also, the Marlin 336 has a side ejection action that allows for proper mounting of a scope.

Even so, these changes were not enough to save the project and Marlin only produced the Model 336 Zipper for six years. Marlin produced a grand total of 2,774 Micro Groove Zipper rifles.

Between the Marlin 336 and the original Winchester Model 64, the total factory production of rifles chambered in .219 Zipper topped out at a grand total of 3,635. Shooters have undoubtedly converted a few other rifles like the Winchester 1885 Hi-Wall, Krag-Jorgensen, and Lee-Enfield to the .219 Zipper over the years, but the fact remains that there aren’t many rifles chambered in the cartridge in existence.

As stated previously, the ammunition manufacturers stopped producing .219 Zipper ammo many years ago and loaded ammunition is a collectors item that fetches quite a premium.

If you have a rifle .219 Zipper that you really want to shoot or hunt with, hand-loading is your best bet. There is still a fair amount of reloading data out there for the cartridge and since it shoots .224″ bullets (the same bullet diameter as the .223 Remington), bullets are also easy to find.

Remember to use caution with pointed bullets if you plan on loading multiple rounds in a tubular magazine though.

.219 Zipper brass is occasionally available from major distributors and it is even possible to resize .25-35 WCF and .30-30 Winchester brass to the appropriate dimensions.

When shot from a good rifle by a competent shooter, the .219 Zipper is an extremely accurate cartridge roughly on par with the .22 Hornet. Sub 1″ inch groups are certainly possible under the right conditions.

Hunting With The .219 Zipper

The .219 Zipper was designed as a varmint cartridge for a lever action rifle and it excels in that role. Especially when chambered in an easy to carry rifle like the Marlin 336, it’s a wonderful choice for carrying as a “ranch” gun and dispatching crows, coyotes, foxes, javelina, and wild hogs as necessary. Where legal, the .219 Zipper is certainly capable of taking deer sized game, though it’s really on the light side for task and doesn’t have much margin of error for imprecise shot placement.

It does not have nearly as flat of a trajectory as the .223 Remington, but the .219 Zipper is still very effective out to around 200 yards.

Final Thoughts On The .219 Zipper

Just like with the .22 Hornet, the .219 Zipper is not a high velocity cartridge for those interested in long range varmint hunting. On the other hand, it’s perfect for shots inside 200 yards and doesn’t have much recoil or muzzle blast.

So, if you’ve happened to inherit a rifle chambered in .219 Zipper and want to do a little hunting with it, by all means do so. It’s a sweet shooting little cartridge that does pretty darn well in the role it was intended for.

To learn about some other high velocity cartridges that are popular for varmint hunting, check out the article below:

The Winchester Handbook by George Madis and The 336: A Collector’s Reference on the Model 336 Marlin by Doug Murray were used as references for this article.