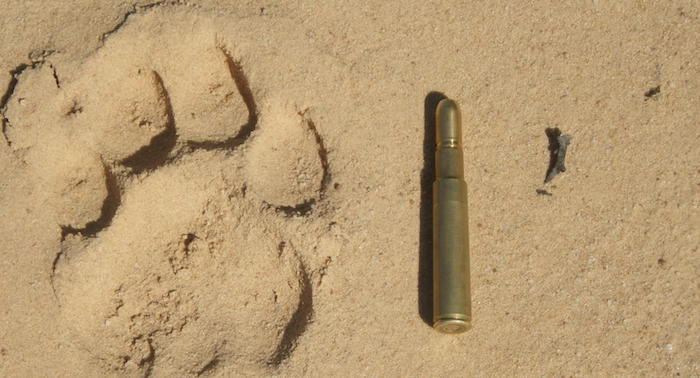 Keep reading to learn all about the history and recommended uses of the .416 Rigby.

When it was first designed in the early 1900s, the .416 Rigby was a quantum leap forward in the field of big game hunting ammunition. The cartridge quickly caught on as a favorite among hunters pursing large, thick skinned species of dangerous game like buffalo and elephant. Even though over 100 years have elapsed since its introduction, the .416 Rigby remains a favorite of big game hunters in Africa.

The .416 Rigby came about due to two major advances in firearm technology in the early 20th Century: the introduction of cordite (and other smokeless powders) and the Mauser 98 rifle. Prior to these developments, hunters primarily used single shot or double barreled black powder firearms.

Since black powder firearms have a relatively low velocity limit (at least by modern standards), hunters pursuing dangerous game tended to use large bore rifles firing very heavy bullets. Indeed, for this reason, elephant hunters of the day, like the legendary Frederick Courteney Selous, used massive 4, 6, or 8 bore rifles firing bullets as large as 1″ in diameter and weighing as much as 1,750 grains (4 ounces)!

These rifles produced an incredible amount of smoke and had immense recoil even though they were also extremely heavy. At the same time, those massive, slow moving lead bullets did not penetrate very well and the rifles took a long time to reload.

So, it should not come as a surprise that the .416 Rigby made a big splash when John Rigby & Company introduced the cartridge in 1911. Using cordite as a propellent, the original load pushed a 410gr bullet at about 2,300fps (4,800 foot pounds of energy), which was nearly twice the velocity of the big bore black powder cartridges of the day.

These significantly higher velocities enabled the use of smaller diameter bullets. This in turn resulted in bullets with significantly higher sectional densities (.338 for a 410gr .416 bullet and .330 for a 400gr bullet), which correspondingly penetrated much more reliably than the old big bore rifles.

In addition to the incredible improvement in performance the .416 Rigby offered compared to previous cartridges, John Rigby & Co went a step further and designed the cartridge to operate in the revolutionary new bolt-action Mauser 98 rifle. A hunter equipped with a Mauser rifle could fire as many as 5 shots before emptying the magazine (compared to only one or two with earlier rifles).

So, not only was the .416 Rigby a dramatic improvement over the most common big game hunting cartridges of the day, but it also could be used in an inexpensive and reliable rifle that more than doubled the number of shots a hunter could fire before reloading. Not surprisingly, hunters quickly embraced the .416 Rigby, along with similar performing cartridges introduced around the same time like the .404 Jeffery and the .425 Westley Richards, and slightly less powerful, but still potent cartridges like the 9.3x62mm Mauser and the .375 H&H Magnum.

While the .416 Rigby is certainly more well known than the .404 Jeffery and the .425 Westley Richards, that’s not because it’s a dramatically better cartridge than the other two (they are all solid performers). Instead, the cartridge owes a great deal of its fame to Robert Ruark, whose classic book Horn of the Hunter immortalized a young professional hunter in Kenya named Harry Selby and who happened to carry a Mauser chambered in .416 Rigby on Ruark’s now famous hunt.

Several manufacturers, such as Barnes, Federal, Hornady, Norma, Nosler, and Swift, produce factory loaded .416 Rigby ammunition. That wasn’t always the case though. For many years, the British company Kynoch was the only producer of .416 Rigby ammunition. When the company stopped producing ammunition after World War II, the cartridge nearly faded into obscurity. Fortunately, other companies eventually picked up the slack and today hunters armed with a .416 Rigby have more good quality choices for ammunition than at any other time.

For instance, Hornady loads their 400gr DGX/DGS bullets to an advertised velocity of 2,415fps, making it an absolutely deadly cartridge for cape buffalo hunting. The same goes for the 400gr Nosler Safari Solid (~2,400fps), the 400gr Barnes VOR-TX TSX (~2,400fps) and the Federal 400gr Trophy Bonded Bear Claw/Sledgehammer (~2,370fps). All of these loads produce around 5,100 foot pounds of energy at the muzzle, which is more than adequate for hunting even the largest and toughest species of dangerous game like elephant.

One of the downsides of the cartridge is that it has a relatively stout recoil. Though it is mild compared to the recoil of the really big bore cartridges that it was designed to replace, it is still certainly more than the recoil of a cartridge like a .375 H&H or a .375 Ruger.

Hunting With The .416 Rigby

The .416 Rigby excels when hunting really big species of dangerous game. With factory loads that produce over of 5,000 foot pounds of energy, the cartridge meets the legal requirements to every species in the African Big 5 along with just about every other species of dangerous game in the world. Especially with modern gunpowder and bullets, the cartridge is absolutely deadly on elephant, cape buffalo, hippo, and lion. With a sectional density of .330, the 400gr bullets used in the .416 Rigby also penetrate incredibly well and there are few other cartridges in common use that can compare with it in this regard.

That’s why the .416 Rigby is such a great cartridge for applications ranging from Water Buffalo hunting in Australia to elephant hunting in Zimbabwe.

For these same reasons, it is also a really good cartridge for hunting extremely large species of African and North American antelope and deer like eland and moose. Though there are probably better cartridges to use when hunting those animals, the .416 Rigby will certainly work well, especially if the hunter is primarily pursuing something larger and more dangerous (like buffalo) and is armed accordingly.

The .416 Rigby will also do the job on smaller species of game, but the recoil and cost of ammunition make it a less than ideal choice. It is also not a very flat shooting cartridge either, which makes it challenging to shoot at longer ranges, though this is rarely a problem at the close ranges typical on cape buffalo and elephant hunts.

Finally, one of the other advantages of the .416 Rigby is the fact that it is a relatively low pressure load. This really comes into play during the very hot conditions sometimes encountered in Africa. Trust me when I say that you really don’t want a broken extractor or a stuck bolt due to excess chamber pressure when you’ve got an angry buffalo bearing down on you.

Even though the .416 Remington Magnum and .416 Weatherby Magnum perform as good or better than the .416 Rigby on paper, both are much more susceptible to problems resulting from excess pressure. Obviously, this is less of a concern when hunting Alaskan or Canadian grizzly/brown bears, but is really something to keep in mind when hunting in Africa.

With all that said, the .416 Rigby has a proven track record of over 100 years of excellent performance in the field on the largest and toughest species of dangerous game in the world. Especially considering the fact that good quality and reasonably priced bolt action rifles like the CZ USA 550 Safari Magnum and Mauser M 98 Magnum are available in .416 Rigby, it should not be surprising that the cartridge is still incredibly popular among visiting hunters as well as PHs in Africa who want a powerful and proven cartridge to use on buffalo and elephant.

After all, imitation is the highest form of flattery and the fact that companies have produced similar cartridges like the .416 Ruger, .416 Remington, and .416 Weatherby speaks to the soundness of the original Rigby design.

There may be slightly better choices for hunters who need a good “stopping” cartridge to use on angry buffalo at close range (like some of the Nitro Express cartridges), but the .416 Rigby is still a pretty darn good all around big game hunting cartridge.

To learn more about the .338 Lapua, which uses a case based on the .416 Rigby, read the article below:

Do you have a rifle chambered in .416 Rigby that you’re just itching to take on a hunt?

The Lyman 50th Edition (p336) and Hornady 10th Edition (p728-729) reloading manuals along with Africa’s Most Dangerous by Kevin Robertson (2nd Edition, p 107-112) were used as references for this article.