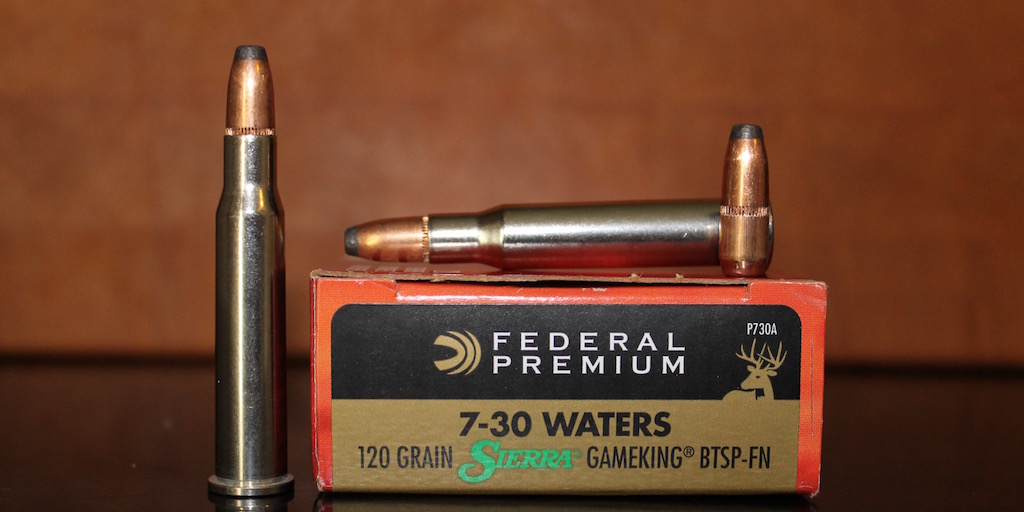 Is the 7-30 Waters a worthwhile cartridge for deer hunting?

I think we’re in agreement that hunting with the 7-30 Waters might not make much sense at first. Due in part to the fact that it started life as a wildcat cartridge, it can be difficult to find factory loaded 7-30 Waters ammo. At the same time, there aren’t many firearms out there chambered in the cartridge.

Even so, the 7-30 Waters has several characteristics that make it an incredibly appealing cartridge for many hunters.

In this article, I’m going to discuss why you should consider hunting with the 7-30 Waters.

Ken Waters originally designed the 7-30 Waters (sometimes incorrectly called the 7×30 Waters) in the 1970s in an effort to improve upon the performance of the legendary .30-30 Winchester cartridge. Built by simply necking down a .30-30 cartridge to fire a 7mm (.284”) instead of a .308” bullet, the Waters cartridge fires a lighter bullet with a higher ballistic coefficient at a higher muzzle velocity (same idea as the .219 Zipper).

Though the two cartridges have a similar amount of kinetic energy at the muzzle, the Waters has a flatter trajectory and a longer effective range than the .30-30 Winchester (and similar cartridges like the .35 Remington). At the same time, since Waters designed the cartridge to operate at a pressure comparable to the .30-30, the 7-30 Waters does all of that with noticeably less recoil than its parent cartridge.

Finally, the cartridge is also pretty darn accurate. Combined with the fact that it’s so pleasant to shoot and has a relatively flat trajectory, the cartridge has much better performance at long range (over 150 yards in this case) than the .30-30.

2. The 7-30 Waters is available in several easy to carry guns

Due to its origins with the .30-30 Winchester, Ken Waters originally designed the 7-30 Waters for use in lever action rifles. For that reason, shooters primarily used customized Winchester Model 1894 (M94) or Marlin 336 rifles during the early days of the cartridge. Winchester eventually legitimized the cartridge in 1984 when the company started producing a carbine and a rifle version of the Model 1894 chambered in 7-30 Waters. Thompson Center eventually started producing their Contender rifle and pistol in the cartridge as well.

Though Winchester no longer produces the M94 in the cartridge, it’s possible to find those rifles for sale on occasion and Thompson Center still produces the Contender in 7-30 Waters. The end result is that the light recoiling cartridge is most commonly available in lightweight, compact, and easy to carry firearms.

So, not only is the cartridge a joy to shoot, but 7-30 Waters guns are usually a joy to carry as well.

3. The 7-30 Waters is great for small or recoil shy hunters.

Even is a lightweight and easy to carry rifle, the 7-30 Waters has recoil comparable to other light kicking cartridges like the 6.5×55 Swede. Those same attributes make it a wonderful cartridge for children, women, or other hunters who aren’t very big or just don’t like dealing with a lot of recoil.

Considering that it’s more than powerful enough for hunting animals like deer, feral hogs, black bear, and pronghorn out to around 200 yards, it shouldn’t be surprising that more than a few young men and women have harvested their first deer using the cartridge over the years.

4. The 7-30 Waters is a wonderful cartridge for hunting with a handgun

Indeed, even when taking into account a slight drop off in performance when fired from a shorter pistol barrel, the cartridge has a flatter trajectory, a longer effective range, and more muzzle energy than many other cartridges popular in handguns like the 10mm Auto and the .44 Magnum.

Even when used in a handgun, the 7-30 Waters still has a relatively mild recoil. With that in mind, many hunters are able to take full advantage of longer effective range and the inherent accuracy of the cartridge when using a good pistol like the Thompson Center Contender.

5. There is quality 7-30 Waters ammo currently in production

Unfortunately, there never were many factory loads available for the cartridge. As of 2018, there is only one option for factory loaded 7-30 Waters ammo: the Federal Premium Vital-Shok load with a 120gr Sierra GameKing boat-tail soft point (BTSP). Federal advertises a muzzle velocity of 2,700 feet per second (1,940 foot pounds of energy) for that 120 grain bullet using a 24” test barrel. Figure on losing around 100-200 feet per second of velocity when using that load in firearm with a shorter barrel length, like the 10” 14” or 20” Contender barrels found on rifles or pistols.

While there aren’t many 7-30 Waters ammo options out there, the good news is that particular Federal load is perfect for hunting deer and similar sized game. 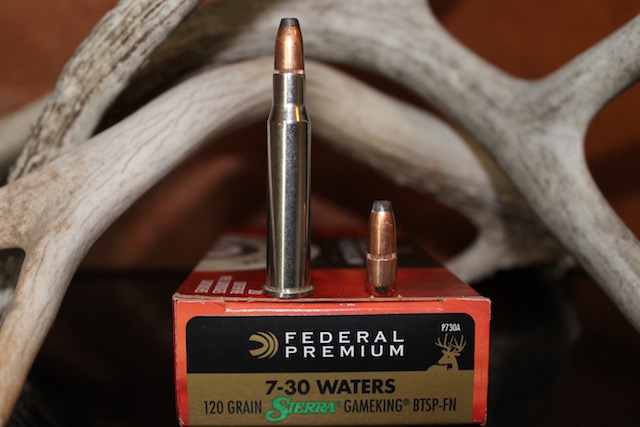 6. Reloading the 7-30 Waters is relatively simple

To do so, just resize the .30-30 case using a 7-30 Waters sizing die. Then, load it with a small power charge and shoot it in a 7-30 Waters firearm. This will expand the case to the proper dimensions.

Once you have enough 7-30 Waters brass, it’s just a matter of selecting the proper 7mm (.284”) bullet (the same diameter bullet used in the 7mm Mauser, 7mm-08,  .280 Remington, .280 Ackley Improved, and 7mm Rem Mag) to use and then working up a couple different loads using a reputable reloading manual. Fortunately, there are a lot of quality 7mm bullets produced by the major ammo companies like Hornady, Nosler, Sierra, and Speer.

7. The 7-30 Waters can be improved upon through reloading

As previously discussed, the cartridge was originally developed for use in lever action rifles like the Marlin 336 and the Winchester 1894. Since these rifles have tubular magazines with the tip of one bullet resting on the primer of the bullet in front of it, most 7-30 Waters ammo is loaded with flat nose bullets in order to reduce the possibility of a cartridge firing in the magazine.

However, that’s obviously not a concern with a single shot pistol or rifle like the T/C Contender. When handloading for these firearms, it’s possible to safely use pointed bullets with an even higher ballistic coefficient that allow the hunter to wring out all the performance available in the cartridge.

NEXT: .45-70 GOVERNMENT: BONE-CRUSHING PERFORMANCE FROM AN OLD SCHOOL LEVER-ACTION RIFLE