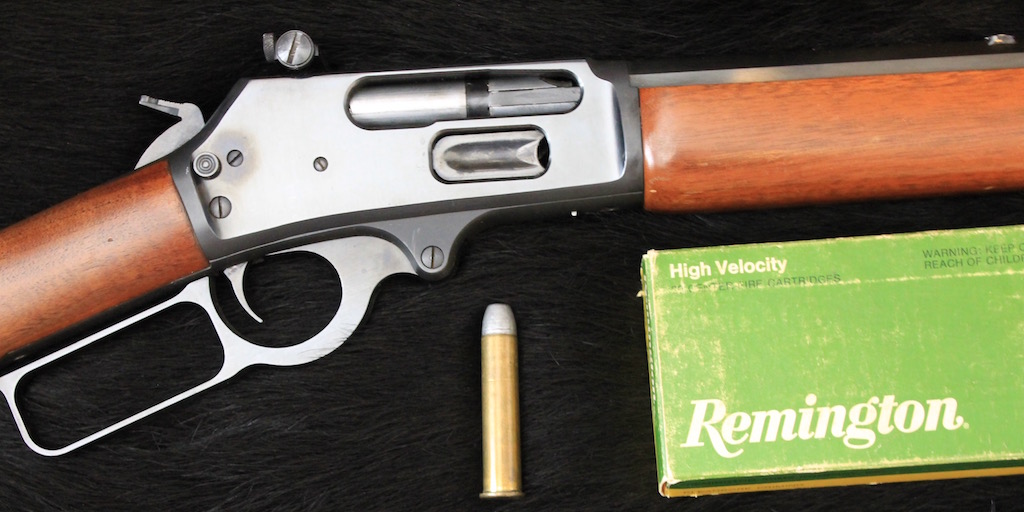 Many people still use the .45-70 for hunting deer and other species of big game with excellent results. Here are a few great brands of .45-70 ammo that should serve you well next time you hit the woods.

Though it was originally loaded with black powder and introduced in the 1870s, the .45-70 Government is still a relevant and heavy hitting rifle cartridge. In fact, due to advances in powder and bullet technology, the .45-70 ammo is now even more effective for hunting than it ever has been. Known for its bone crushing power and excellent terminal performance on virtually every species of North American big game at short to medium range, hunters all over the United States still utilize the .45-70 for deer hunting in thick conditions and it’s also quite effective on black bear, feral hogs, moose, and grizzly bears.

While it can be a very effective cartridge on many species of African game, make sure you read the article below if you’re thinking about using the .45-70 for hunting cape buffalo.

Read This Before Hunting Cape Buffalo With The .45-70 Government

Fortunately, the major ammunition manufactures currently offer multiple varieties of .45-70 ammo factory loads specifically designed for hunting big game. For that reason, regardless of whether you’re using a Marlin 1895, a single-shot Trapdoor Springfield, a converted Siamese Mauser, or a Thompson Center Contender, there is something for everyone on the list below of the best .45-70 Government ammunition for hunting.

In today’s post, I’m going to show you the best .45-70 ammo for hunting and go over the pros and cons of each load

Similar to the .35 Remington and .30-30 Winchester, the .45-70 Government is relatively popular in lever action rifles. Many of these rifles (like the Marlin 1895 and Winchester 1886) have tubular magazines where the bullets are stacked tip to primer. For that reason, most .45-70 ammo uses flat or round nosed bullets to prevent recoil from causing the tip of one cartridge from detonating the primer of a cartridge stacked on top of it. The downside of that is those bullets aren’t very aerodynamic.

Hornady developed their LEVERevolution line of rifle ammo to solve that problem. This ammunition uses bullets with a flexible polymer tip that increases their ballistic coefficient. However, they remain safe to use in a tubular magazine.

Loaded with either a 325 grain FTX bullet or a 250 grain MonoFlex bullet, .45-70 LEVERevolution ammunition has a flatter trajectory and carries more energy down range than traditional .45-70 Government factory ammunition loaded with round nosed bullets. This doesn’t turn the .45-70 Government into a flat shooting or long range cartridge, but it does noticeably improve the ballistics. This is excellent ammunition you plan on using your .45-70 for deer hunting.

The MonoFlex bullets are also made of a 100% copper alloy, which makes them a great choice if you’re a California resident and need lead free .45-70 ammo for hunting.

Before going hunting with this ammo though, make sure you spend some time at the range with it to ensure it functions reliably and shoots accurately in your rifle. If it does shoot well in your rifle, then this may well be the best .45-70 ammo for hunting deer, black and grizzly bear, feral hogs, and moose.

It’s far from the latest and greatest stuff, but this Federal Fusion loading with a 300gr bullet is really good 45-70 ammo for deer hunting.

Federal Fusion 45-70 ammo is primarily intended for deer hunting. However, it will also work pretty well for hunting bigger game like black bear and elk as long as ranges are short.

That said, Federal Fusion 45-70 ammo is not my #1 recommendation for hunting really big, tough, or dangerous game like elk, moose, or bear unless you can’t find anything better. Instead, use one of the other loads I recommend later in this article like the Barnes TSX.

All things considered, this is outstanding ammunition for deer hunting though. It will also work great on feral hogs. In addition to being very effective in that role, this ammunition is also somewhat reasonably priced and has been one of the easier to find 45-70 ammo options recently. It’s also pretty darn accurate.

Just like you’d expect with such a popular cartridge, Barnes produces .45-70 ammo featuring their legendary copper X-Bullet. Optimized for rapid expansion, high weight retention, and deep penetration, this is an outstanding choice of .45-70 ammo for hunting black bear, moose, whitetail deer, feral hogs, and elk. It’s also 100% copper, which makes the VOR-TX an ideal brand of lead free .45-70 hunting ammo for use in states like California that that don’t permit the use of lead bullets.

Standard Remington Core Lokt .45-70 ammo is loaded to the original .45-70 Government specifications of a 405 grain bullet at just under 1,350 feet per second. For that reason, Remington advertises that it’s safe to use in all .45-70 rifles in good condition. Don’t let the performance of this load on paper fool you into thinking that this is an anemic load though: hunters used the original black powder .45-70 cartridge to kill thousands of buffalo in the 1870s. There are better .45-70 ammo choices these days for that task than this particular load, but that example does illustrate the capability of the .45-70 in the right hands.

It’s no barn burning load by any stretch of the imagination, but it’s still quite dependable and capable. So if you’re a “meat and potatoes” sort of person who wants some quality ammunition to use in your .45-70 for hunting deer, feral hogs, black bear, and maybe even something bigger, then the Remington 405 grain Core Lokt will probably work really well for you.

Make sure you purchase the standard (not “High Performance”) Core Lokt ammunition if you want to use it in a Trapdoor Springfield.

Buffalo Bore specializes in manufacturing high performance factory loaded ammunition that’s loaded right up to the maximum SAAMI specifications. Their .45-70 Magnum ammo performs exactly like you’d expect: this is hard hitting ammunition specifically designed for hunting the biggest bears and moose. Their 300 grain JHP and 405 grain JFN loads in particular are also excellent .45-70 ammo for bear defense and will flatten any bear on this planet with proper shot placement. So, if you’re looking for the best .45-70 ammunition to carry in your Marlin Guide gun for protection in grizzly country, this is the stuff you need to buy.

Note: this .45-70 ammunition is NOT safe to use in a Trapdoor Springfield.

The folks at Buffalo Bore only recommend using this ammo in the following rifles:

Marlin 1895 (1895 Marlins are all model 336 actions, chambered in 45-70) iterations made since 1972, all Browning 1885 and 1886 copies, Rossi Rio Grande, New England Arms Handi Rifle, T/C Encore, ALL falling block actions made of modern steel such as Ruger No. 1 and No. 3, Shiloh, Christian and Pedersoli Sharps, Henry Lever Action Rifles, all Winchester 1886 iterations made since 1915, CVA Centerfire Rifles and all Siamese Mauser bolt actions 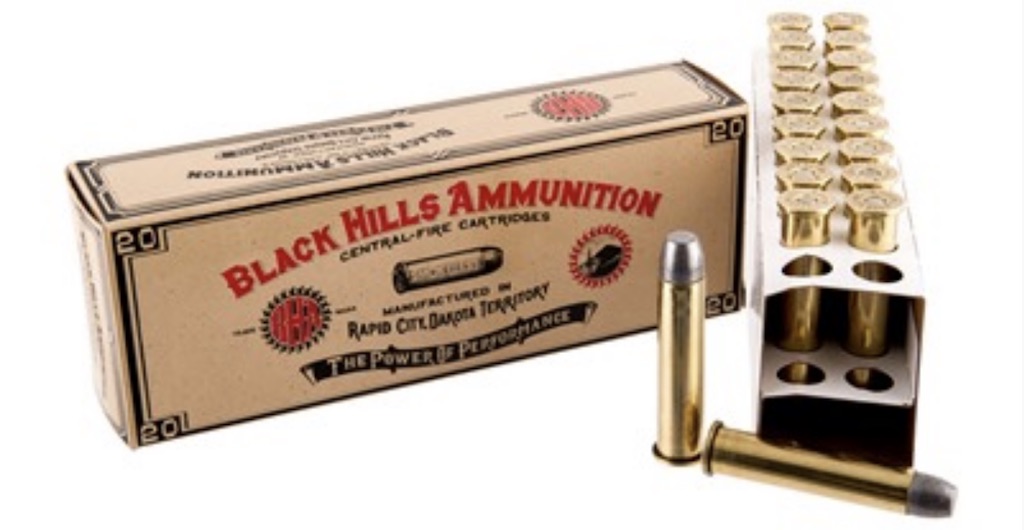 Similar to the Remington Core Lokt .45-70 Govt ammo, HSM and Black Hills both produce .45-70 Government ammunition firing 405 grain lead cast bullets loaded close to the original cartridge specifications. Both companies advertise their loads as low recoil rifle ammunition designed for Cowboy Action shooting. However, it will still work really well for hunting (particularly for thin skinned game) if you were so inclined to use it in that role. All in all this is nice factory ammo to use in your .45-70 for hunting deer, feral hogs, and black bear.