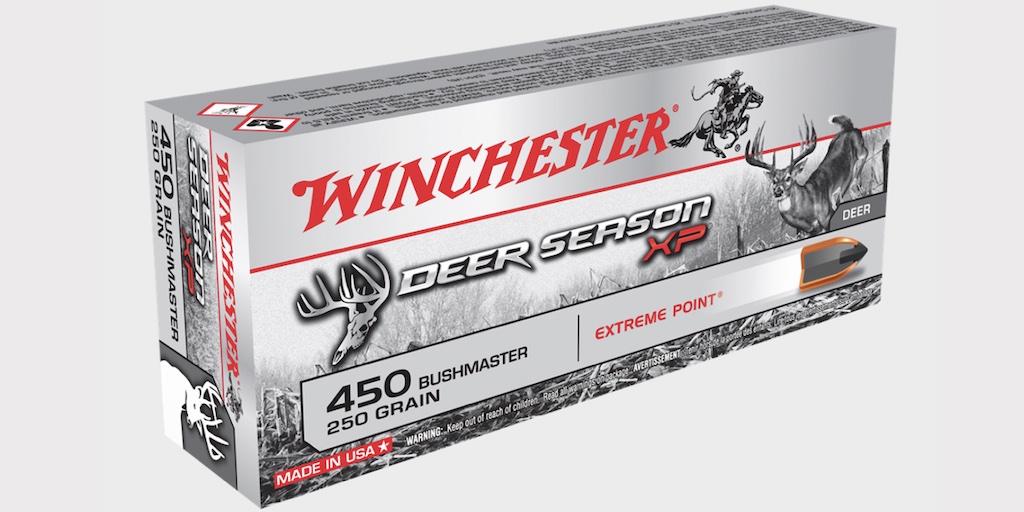 Many people use the hard hitting 450 Bushmaster for hunting deer, feral hogs, and many other species of big game with excellent results. Here are a few great brands of 450 Bushmaster ammo that will probably serve you very well next time you’re afield.

Released in 2007, the 450 Bushmaster cartridge essentially duplicates the performance of the outstanding 45-70 Government cartridge with the added benefit of fitting in an AR-15 platform and meeting the legal requirements some states have for hunting deer with straight walled rifle cartridges. Not surprisingly, the cartridge is now very popular and many companies like Barnes, Buffalo Bore, Federal Premium, Hornady, Remington, and Winchester produce several different variants of 450 Bushmaster ammo for hunting deer, feral hogs, and other big game animals.

Originally designed by Tim LeGendre of LeMag Firearms as the .45 Professional, Bushmaster Firearms International collaborated with Hornady in bringing the project to market as the .450 Bushmaster under license from LeGendre.

The new straight walled cartridge functions in the AR-15 platform and, pushing a .452″ 250-grain bullet at 2,200 feet per second (2,686 ft-lbs of energy), delivers bone crushing performance out of an easy to handle semi-auto rifle.

While the cartridge excels at hunting big game at short and medium range, it quickly drops off in performance as range increases due to the low muzzle velocities and low BC bullets used by the cartridge. In addition to having lots of bullet drop out past 150 yards, the cartridge is only available in a handful of bullet weights and recoil can be pretty stout as well.

These are all important factors that need to be taken into consideration. For these reasons, the cartridge is best suited for a few pretty specific hunting situations.

First, it’s a great choice for those who need a straight wall cartridge for deer hunting in states like Iowa, Ohio, on public land in Indiana, and certain parts of southern Michigan.

The .450 Bushmaster is not limited to those situations though and plenty of hunters all over North America use it for hunting a wide variety of game.

Note that the .450 Bushmaster is a big step down in performance compared to many other big bore cartridges like the 458 Win Mag and 458 Lott and there’s a big difference between what those cartridges will do and what the 450 Bushmaster is best suited for, especially when hunting dangerous and/or much larger game.

That said, it will definitely work on bigger and tougher game under the right circumstances though. Just be sure to use appropriate ammunition (which we’ll get to shortly) and keep your ranges short if you want to use the 450 Bushmaster for hunting elk, black bear, or moose.

Fortunately, there is a wide variety of 450 Bushmaster factory loads specifically designed for just about every conceivable big game hunting situation. So, regardless of whether you’re using a bolt action Ruger American Ranch, a Ruger Scout Rifle, a Savage 110, a single shot Ruger No. 1, a semi-auto Ruger AR-556, or one of the other many .450 Bushmaster rifles in production, there is pretty much guaranteed to be something for everyone on the list below of the best 450 Bushmaster ammunition for hunting.

In today’s post, I’m going to show you the best 450 Bushmaster ammo for hunting deer, feral hogs, black bear and other big game and I’ll also go over the pros and cons of each individual load.

Update April 2022: Ammo supplies finally look like they’re starting to recover. We still have a long way to go and selection is still nowhere near where it was back in 2019, but things are a lot better now than they were even 6 months ago.

Click the link below if you just want to quickly check what 450 Bushmaster ammo is in-stock and ready to ship so you can hit the range and get ready for hunting season.

Modern sporting rifles are extremely popular hunters and shooters in the United States. For this reason, many of the big ammunition companies produce special ammunition optimized for performance in those “black” guns. Unfortunately, some of those rifles are picky about the ammo they function best with.

Well, Hornady Black ammo is intended for use in so-called modern sporting rifles like the AR-15 family of rifles and carbines. Hornady designed this ammunition to reliably function in a wide variety of semi-automatic rifles (including direct impingement, inertia, & gas piston) and many of the various 450 Bushmaster magazines.

Since the 450 Bushmaster was originally designed as a “big bore” AR cartridge, it only makes sense that Hornady offers this cartridge in their Black line of ammo as well.

Loaded with a 250 grain Flex Tipped Expanding (FTX) bullet with a plastic tip, this ammunition is a great choice for those who want to use their 450 Bushmaster for deer hunting, especially if the hunter wants to use an AR platform or other semi-auto 450 Bushmaster rifle. Those FTX bullets are great on thin-skinned game and this is my #1 recommended 450 Bushmaster ammo for hunting using a semi-automatic rifle.

This is also great ammunition for those who want to take their .450 Bushmaster hog hunting. A skilled hunter can make short work of a group of hogs with a magazine full of Hornady Black .450 Bushmaster cartridges.

This is also one of the higher velocity 450 Bushmaster ammo options as well and also uses the same style FTX bullets with polymer tips Hornady offers in many of their LEVERevolution loads (to include the 45-70). So, while it’s far from a good long range ammo choice, this stuff does have a slightly longer effective range than some other 450 Bushmaster ammo loads.

It will definitely work on really large game if you don’t have anything better, but I do not recommend using Hornady Black 450 Bushmaster ammo for hunting game like elk, moose, or black bear unless that’s all you have. Instead, I think other loads I recommend later in this article are a better choice like the Barnes TSX if you absolutely insist on using the cartridge for a bear or elk.

All things considered, this Hornady ammo is outstanding on deer sized game and you can’t go wrong with Hornady Black 450 Bushmaster ammo for deer hunting.

Winchester’s Deer Season XP line of ammunition is some of the best 450 Bushmaster ammo for deer hunting. The Extreme Point bullet this rifle ammo uses is similar to Winchester’s Power Point bullet, but the Extreme Point has a large diameter polymer tip that’s specifically designed to produce a gigantic wound channel along with massive impact trauma.

This normally results in a very short tracking job and a very easy to follow blood trail. Even so, it’s designed specifically to compete with popular whitetail deer hunting ammo like the Federal Fusion, Federal Power-Shok, Hornady American Whitetail, Remington Core-Lokt, and Winchester Super-X in terms of accuracy and reliability.

The Winchester Deer Season XP line is also competitively priced and has one of the lowest costs per round out of all the 450 Bushmaster ammo on this list.

So, not only is this some very reasonably priced 450 Bushmaster ammo, but it also has a very good reputation for producing a giant wound channel and minimizing the distance deer run after being hit. In fact, this Winchester ammo is one of my top recommended brands of 450 Bushmaster ammo for whitetail deer hunting. The same goes for blacktail and mule deer hunting.

While this might be the best 450 Bushmaster round for deer, I do NOT recommend using it for bigger game like black bear, elk, or moose though (keep reading for 450 Bushmaster elk hunting ammo recommendations).

Barnes produces a single loading for the 450 Bushmaster using a 250gr TSX bullet. While this ammunition suffers from the same shortcomings as all other 450 Bushmaster loads in terms of range, it is still a fantastic option for those looking for great 450 Bushmaster ammo for elk hunting at shorter ranges. The same goes for game like black bear and moose as well.

In fact, I’d say the 250 grain TSX load from Barnes is some of the best 450 Bushmaster ammo for elk, bear, and moose hunting. I’m not a fan of using the 450 Bushmaster on truly dangerous game like brown bear or cape buffalo, but this is the ammo I’d recommend for those who insist on using the cartridge for those tasks.

It will also still work really well on game like deer and feral hogs. I don’t think you can do any better than this Barnes ammunition if you want something that’s hard hitting at close range on all manner of game for the cartridge.

For those reasons, I think this Barnes 450 Bushmaster ammo is the best option for those who want to hunt the widest possible range of game with this cartridge.

In addition to being one of the most versatile loads for the cartridge, this ammunition is are also 100% copper, which makes it an ideal choice of 450 Bushmaster hunting ammunition for use in states like California that that don’t permit the use of lead bullets.

It’s not flashy or trendy, but this Winchester Super X loading with a 260-grain bullet is definitely great 450 Bushmaster ammo for deer hunting. Not only is it very effective, but this ammunition is also normally very reasonably priced and has been one of the easier 450 ammo options to find during these past few years.

These bullets are pretty soft and tend to expand very well at ranges inside 200 yards. Additionally, since this loading uses heavier bullets with a higher sectional density, it also tends to penetrate well and you’ll very likely get an exit wound from a deer regardless of the shooting angle with this bullet.

While I think this is outstanding deer hunting ammunition, I do not recommend using Winchester Super X ammo for hunting bigger game like black bear, elk, or moose with a 450 Bushmaster. Instead, stick to medium game like feral hogs and deer with this ammunition and you should have outstanding results.

In addition to being very effective, this ammunition has one of the lowest costs per round out of all the .450 Bushmaster ammo on this list. So, it’s tough to go wrong if you want some great 450 Bushmaster ammo for deer hunting. Place your shot where it needs to go and no deer will run very far afterwards.

The .450 Bushmaster is an outstanding cartridge for deer hunting and many of the big ammunition companies make special lines of ammo designed specifically for hunting whitetail deer. Federal’s Non-Typical Whitetail is another great example of some high quality ammo for deer hunters.

Even though it uses a heavy for caliber 300 grain bullet, resist the temptation to use it on bigger game though. I’d use it without hesitation on deer or feral hogs, maybe black bear too. In my personal opinion, it’s too soft for use on elk though even though it uses a very heavy bullet.