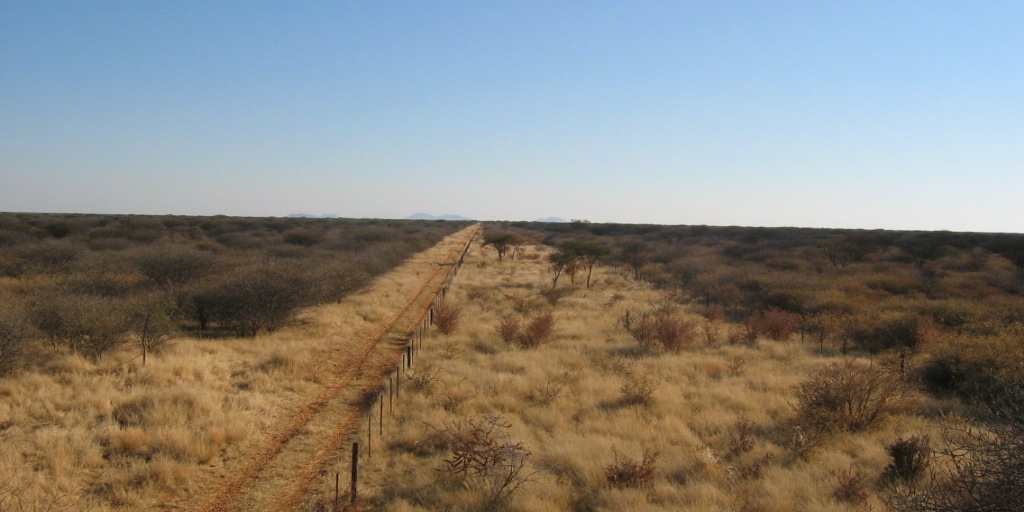 From Houston we flew to Frankfurt where we had a 12 hour layover. We stayed in a hotel at the airport for the day, but were due to the time change, it was difficult to sleep. The time finally arrived to board our flight to Windhoek that evening. We flew through the night over the Dark Continent; literally, there were almost no lights to be seen on the ground as we flew over the Sahara Desert and the Congo on the way to Namibia. After a second 10 hour flight in as many days, my father and I finally arrived in Windhoek during the morning on July 4th. We gathered our bags and then cleared customs and immigration with no problems. Dirk was there waiting for us at the airport and we were soon on the road to his farm, about a three hour drive north of Windhoek. When we left for the airport in Houston I started a timer on my watch. Upon arrival at Dirk’s farm that afternoon I stopped it: after 48 hours of traveling we finally reached our destination.

Even though we had just completed a very long journey, I was very energized and ready to begin my first African Safari. The weather that day, like every other day that we were there, was perfect: sunny with light to moderate winds and temperatures ranging from 45-75 degrees. Dirk’s farm consisted of thousands of acres of land covered with thick brush with occasional roads and clearings cut into it.

It seemed like every plant in Namibia was covered with giant thorns that would tear clothing and skin very easily if you weren’t careful. The land on the farm was very flat, sandy, and dry. However, it absolutely teemed with wild game. I have never seen so much game in one place before or since. Since it was so dry and there were not very many natural sources of water on the land, the water holes were key areas to hunt. In the afternoon, when it began to warm up, we would typically hunt from a stand overlooking one of the water holes.

On the first day, Dirk elected to take us to a stand overlooking one of the water holes where we hoped to see a nice kudu or a warthog to start the safari off. I decided to bring the Martini-Henry out that afternoon. We had only driven a short distance from the farm in Dirk’s truck when very quickly began to see a wide variety of game. At one point, the road traveled along the edge of a giant field that was several square miles in size. As we entered the field, we surprised a group of warthogs and they took off running in the same direction we were driving. For a few hundred yards, we drove alongside the group of warthogs. It was like a scene out of the movie Hatari! I had been on Dirk’s farm for only a couple of hours and I was already having the time of my life! The warthogs quickly veered off into the center of the field and we continued on along our way and soon arrived at the stand we intended to hunt.

The stand was constructed high up in the branches of a tree, maybe 20 feet off the ground. The stand overlooked a long lane cut between two patches of forest. A road ran down the center of the lane with a barbed wire fence at the edge of the forest on the right side. About 100 yards away there was a water hole that a large number of game liked to frequent.

Dirk told us that warthog and kudu especially liked this particular water hole. I was the first to climb into the stand and I quickly began scanning the area with my binoculars. Dirk was still climbing the ladder when a warthog trotted out of the bushes to our left and made a beeline for the water hole, taking no notice whatsoever of us. I had only seen a few warthog during my first day in Africa, but this one was noticeably bigger than the other ones I’d seen. Dirk got very excited and said that this was an excellent warthog.

Thrilled, I started maneuvering the Martini-Henry into position. However, I forgot that it had a 33” barrel and I banged it on the metal roof of the stand. The warthog glanced over at us and we all froze. To our relief, he then went back to drinking and I carefully finished maneuvering the Martini-Henry into position and took aim. The warthog was standing broadside with his right side facing us as he continued to drink from the water hole. Using the side of the stand as a rock solid rest, I carefully aimed and squeezed off a shot. The warthog took off running after the 400 grain slug slammed into his shoulder. Gravely wounded, he ran straight into the barbed wire fence in front of him and the whole fence shook at his impact. The warthog quickly crawled under the lowest strand of the fence and took off into the woods on the other side.

Dirk quickly found the warthog after we climbed down from the stand; he had run less than 50 yards from the water hole. The Martini-Henry did its job well: the bullet hit exactly where I was aiming and passed through both lungs before exiting out the left shoulder. With the tusks measuring nearly 30″, the warthog easily made the SCI record book and earned a gold medal in the Namibian Professional Hunter Association medal system. I don’t know if this particular Martini-Henry rifle had ever been to Africa or taken an African animal before, but it certainly had now. My first African Safari had started off perfectly: I had been in the country less than a day and I had taken an outstanding trophy warthog with a vintage Martini-Henry rifle that my grandparents had given me. I could not have planned the start to the safari any better had I tried!