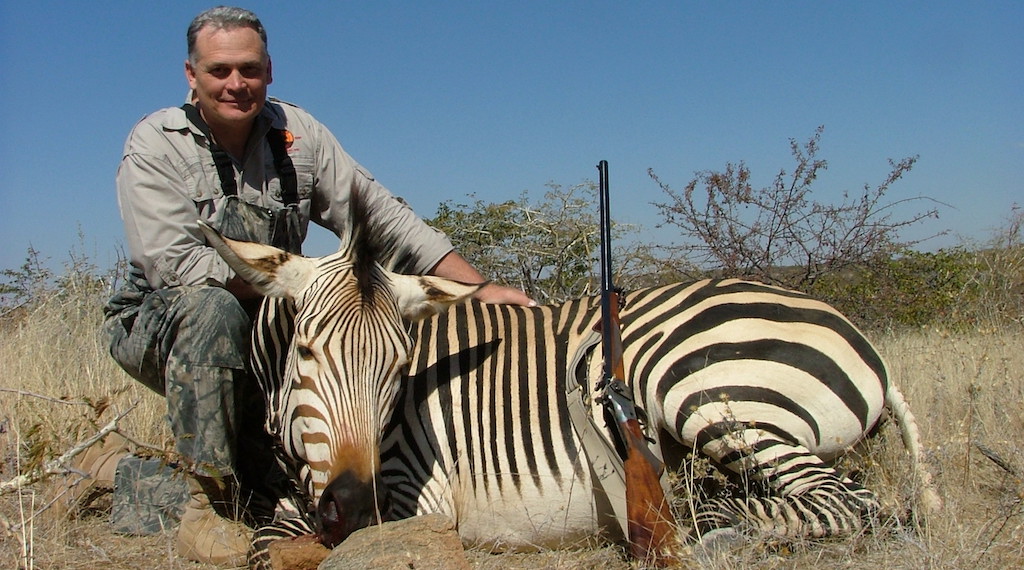 This is the fifth post in a series about my Namibia hunting safari. You can read the previous posts about our preparation for the hunt here, about my first African trophy here, about mine and my father’s kudu here, and about my long shot on a red hartebeest here. You can read the subsequent post about the lessons I learned from the safari here.

The remaining 8 days of the Safari flew by for me. I was fortunate enough to take most of my trophies at the beginning of the hunt, so the rest of the time there was devoted to allowing my father to get his trophies. Dirk drove us to a neighboring farm to hunt Hartmann’s Mountain Zebra. In addition, my father took a second warthog, a black backed jackal, and an eland cow during the remainder of the hunt.

We brought my grandfather’s Winchester Model 43 rifle chambered in .22 Hornet with us to Africa. Years ago, my grandfather shot his first deer with it. In the years since, he bagged many a coyote with the rifle. We took it with us in hopes of collecting a varmint or two in Namibia. We were driving back to the house for lunch one day when we passed one of the many fields on the farm. Dirk, with his eagle eyes, spotted a lone jackal trotting across the field. My father quickly dismounted the truck and used a fence post to steady the rifle. Unsure of the range, he put the cross hairs at the top of the jackal’s back, and squeezed the trigger. The bullet flew true and struck just behind the jackal’s shoulder, midway up his body. The jackal did a front flip, and then lay still on the ground.

A few days later, we left Dirk’s farm to go hunting for zebra. Dirk drove us several hours to the west to a farm that had a plentiful population of Hartmann’s Mountain Zebra. The terrain here was much more rocky and rugged than on Dirk’s farm. To add to the difficulty, it was also at a much higher elevation than we were used to. Navigating the rocky outcroppings that first morning was exhausting hunting. We saw a number of zebra, but could never get close enough for a shot.

That afternoon we went out again on the trail of zebra. After tracking them for only a short distance, we caught up to a small herd. My father singled out an old stallion at the rear of the herd and fired with his Winchester High Wall. The bullet from his .50-110 hit a few inches behind the right shoulder and the zebra took off running. We found the zebra after trailing him for about 200 yards. He was very old and his hide had plenty of scars which added “character” to it and showed he had lived a very interesting life.

Unfortunately, I came down with a case of traveler’s diarrhea and was too ill to hunt for the next couple of days. Having missed out on my chance for a zebra, we headed back to Dirk’s farm for the remainder of our hunt. The last animal I wanted to hunt was a bull eland. After a few days, I felt good enough to get back out into the bush hunting.

The three of us went to a water hole that eland had been known to frequent. Dirk quickly found the tracks of a big bull and we began to follow them. After over an hour of tracking, the tracks had gotten noticeably fresher. However, we noticed that the eland had started to periodically double back down wind of his trail. Evidently, the eland knew that something was following him. Suddenly, a gigantic shape exploded out of the bushes right next to us. We had finally caught up to the eland and he caught our wind as we approached upwind of him. At that point in my life, he was the largest animal I had ever seen. He absolutely dwarfed the kudu and other large antelope I was familiar with. Even though he was gigantic, he moved very swiftly and gracefully. Unfortunately, he did not stop either and I had no shot on him before he disappeared back into the bush.

Dejected, we headed back to the house for lunch before going to a blind overlooking a water hole that afternoon. With just a few minutes before nightfall, a herd of about five eland cows left the shelter of the woods and began to drink at the water hole. One of them was significantly larger than the others, very light colored, and had a deformed horn. Instead of growing straight, one of her horns had a definite curl to it. Since he has an interest in unusual trophies, my father decided to take the eland with the deformed horn. His shot with the Winchester High Wall, hit her behind the right shoulder.

We quickly exited the blind and Bruno ran off on her trail. After only a few seconds, we heard him barking: the signal that the eland was still alive and he was attempting to corner her. Dirk and I took off running through the bush; thorns ripping our clothes and skin as we tried to catch up to the eland before light completely ran out. We caught up to her after a few hundred yards and managed to finish her before she escaped. Thus ended the most interesting night of our safari.

My father and I had the hunt of a lifetime in Namibia and I’m very glad we were able to make the trip together. Dirk provided clean and comfortable accommodations; my father and I stayed in a spare room in his house, which had a private bathroom. Dirk’s wife Thea is an excellent cook and prepared all of our meals. Since then, Dirk has built a separate building for hunters to stay in. It has two bedrooms, a bathroom, and a rooftop terrace for dining and gazing at the stars.

My first African Safari went by all too quickly. The 14 days I spent hunting with Dirk on his farm flew by and before I knew it, I was back in the United States. However, I will always look back fondly on my first trip to Africa. While I did not get all of the trophies I originally wanted, the trip was still successful beyond my wildest dreams. I saw miles and miles of beautiful countryside, dozens of animal species I had never seen before, and got to spend quality time with my father enjoying the outdoors. Dirk and Thea were excellent hosts and gave us a truly memorable experience that I will treasure forever. They did an outstanding job and did everything possible to ensure we had a safe, fun, reasonably priced, and successful hunt.

Click here to read the next post in the series about the lessons I learned from the hunt.