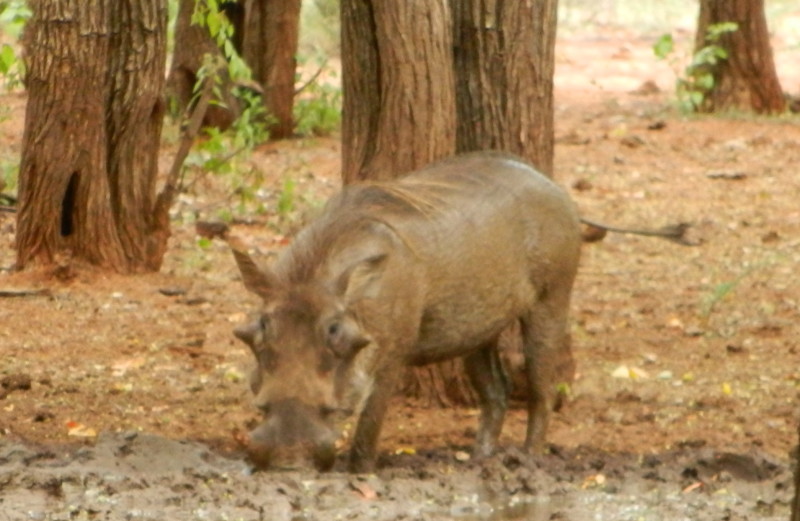 In other articles, I’ve profiled the blue wildebeest, the impala, and the zebra. This week I’ll profile my personal favorite among the animals of Africa: the warthog. When I made my first trip to Namibia as a young man, the warthog was the first animal that I hunted and the thrill of that experience got me completely hooked on Africa. I find warthogs to be ugly, yet at the same time beautiful and magnificent creatures that are quite exciting to hunt.

The warthog is a medium sized member of the pig family and is found across most of sub-Saharan Africa. They typically weigh between 100 and 250 pounds and stand two to three feet tall at the shoulder, with males usually being slightly larger than females. They have a large head in comparison to the rest of their body and have skin growths that look like warts (hence their name) that grow on their face below their eyes. Warthogs have sparse brown or black hair that covers their body. They also have a long, thin tail that is hairless except for a small tuft at the end. Both males and females have tusks, but the tusks on males are much more prominent.

Females and young usually live in groups called sounders. When they mature, males leave the sounder and will only rejoin the sounder to mate with females. The mating season varies by location, but usually occurs right at the end of the rainy season and the females usually give birth to two or more piglets at the beginning of the next rainy season. This ensures adequate food for the young during the first few months of their life.

Warthogs are more dependent on water than many other animals in Africa. As such, they will drink water daily when it is available. Especially when it is hot, they also enjoy taking a mud bath both to cool down and to help keep bugs off their skin.

Since they are so widespread, warthogs are prey for many predators in Africa, especially the lion and leopard. As a result, they are often used by hunters as bait for hunting the big cats.

Of the four subspecies, the Southern and Central African Warthogs are the most commonly hunted. However, this should not discourage potential hunters from pursuing specimens from the other subspecies. Safari Club International combines all four subspecies under a single record book entry and the current #1 was taken in Ethiopia. Indeed, in addition to the typical safari destinations like Tanzania and South Africa, the countries of Ethiopia, Uganda, and the Central African Republic all currently produce very nice trophy quality warthogs.

Fortunately, unless they are very heavily pressured, warthogs are usually diurnal, which makes hunting them much easier. Since they usually drink daily, hunting over a water hole is usually the most successful method when hunting warthog. By sitting in a blind over a water hole one can see literally dozens of warthogs in a single sitting and choose a good quality trophy.

However, spot and stalk hunting in areas where they like to eat can also be a very successful hunting method as well. Indeed, many warthog are taken incidentally while out looking for another species. Since they like to feed in the open, it may be difficult to approach close enough for a good shot unless great care is taken. They do not have great eyesight, but their sense of smell is acute. Ensure that you always approach them from downwind or they will catch your scent and flee.

A final, though less often method used to hunt warthog is to ambush them when they emerge from their burrow during the morning. If you can identify a den that is currently in use by a large male, it may be worth your time to set up at first light along a likely route he will take after waking up.

Warthog are, pound for pound, a pretty tough species. While there are some hunters who have successfully hunted them with .22 caliber centerfire rifles like the .22 Hornet, .223 Remington, or the .22-250 Remington, I consider them to be too light for the job for most situations. The only situation I advocate using a .22 centerfire on a warthog is when taking a head shot. However, most of the time, a good hog hunting cartridges in the 7mm Mauser, .270 Winchester, .280 Remington, .280 Ackley Improved, 7mm Rem Mag, or .30-06 Springfield range will work very well. Just ensure that you utilize heavy for caliber bullets that can punch through muscle and bone in order to reach the vitals.

Shot placement is extremely important on warthogs. With their relative toughness in mind, I recommend a shot directly in the center of the shoulder and approximately one third of the way up the body on a broadside warthog. This shot will hit the top of the heart and the lungs for a quick and ethical kill.

Since they have a large head and they tend to stare inquisitively at objects that they are unsure of, I can recommend a head shot on a warthog under some circumstances (short range shot, competent shooter, accurate rifle, etc). The frontal brain shot is great if the warthog is looking directly at you. In this situation, simply aim directly between the eyes. If the warthog is looking down, as when eating or drinking, aim between the eyes and slightly high. On a side brain shot, aim at the base of the ear. If the shot is placed properly, the warthog should immediately drop with his hind legs giving way first.

If this does not happen, immediately take a follow up shot aiming for the heart and lungs. If the warthog is running away, aim just below the base of the tail. A well constructed bullet should penetrate all the way to the heart and lungs. Even if it does not, a hit that breaks the pelvis will anchor the warthog in place for further shots. While they are not normally an aggressive animal, warthogs are known to injure predators, and occasionally hunters, with their sharp tusks when cornered. Be sure that you keep this in mind when hunting them. Approach all downed warthogs with caution and do not be afraid to use finishing shots if necessary.

The warthog tends to be a commonly overlooked trophy in Africa. That is too bad because they are, in my opinion, one of the more interesting and challenging animals to hunt. Fortunately, warthogs also tend to have one of the lower trophy fees among plains game animals in most locations. If you are planning a trip to Africa, I strongly urge you to consider adding warthog to your list.

The Perfect Shot by Kevin Robertson,  The Safari Club International Online Record Book, and Wikipedia were all used as references for this article.

3 thoughts on “Warthog: Beautiful In An Ugly Sort Of Way”