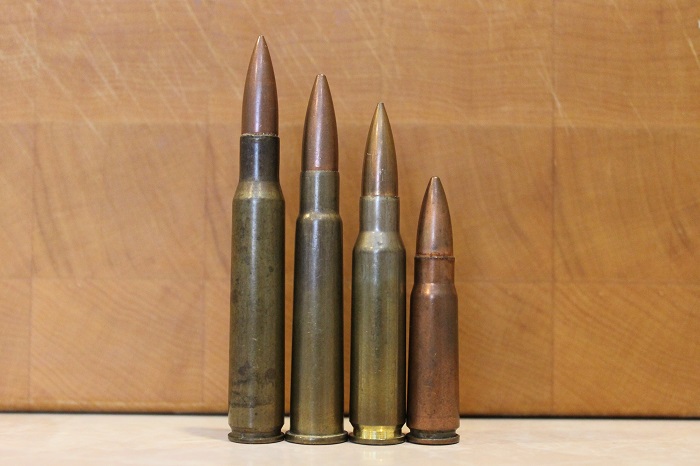 Ever wonder how to convert caliber to mm and vice versa?

However, I’m attempting to clear up some of the confusion in this article by explaining exactly how to convert caliber to mm and mm to caliber.

Note: the system described below applies to small arms cartridges. Big naval guns and other artillery pieces use a different naming system where caliber denotes the length of the gun barrel (which directly affects muzzle velocity) instead of the bore diameter. Scroll down to the comments for a more detailed description of that system.

Keep reading to learn more about caliber vs mm as it relates to rifle, handgun, and rimfire cartridges.

Some of the links below are affiliate links. This means I will earn a small commission (at no extra cost to you) if you make a purchase of rifle, handgun, rimfire, or shotgun ammunition through those links. This helps support the blog and allows me to continue to create free content that’s useful to hunters like yourself. Thanks for your support.

When a person is talking about a twenty two caliber or a thirty caliber rifle, they are referring to a cartridge using the imperial system. In this case, it is also correct to write the cartridge caliber out as “.22 caliber” or “.30 caliber”, which is the approximate diameter of the cartridge in inches.

Using this simple method, you’ll see that a 7.62mm and a 5.56mm cartridge are approximately .30 caliber and .22 caliber respectively. If you are looking for an approximation of the bore size or bullet diameter, that is all you need to know.

However, if you want more specific information on the exact size of the bullet or bore, then you’ll need to dig a little deeper.

Unfortunately, it seems like the deeper you dig, the more complicated and confusing things seem to get. One thing that makes this exercise even more complicated is the seemingly arbitrary naming conventions that many manufacturers use for their cartridges.

However, that’s not always the case.

The .308 Winchester is an American designed rifle cartridge and most (but not all) centerfire cartridges originating in the United States use groove measurements when measuring bullet diameter. So, even though the bore of the rifle measured across the lands is .30″, the actual bullet diameter is .308″ because the bullet must closely match the groove diameter (.308″ in the .308 Winchester as well as the .30 Carbine, .30-06 Springfield, and .300 Win Mag) in order to form a good seal in the barrel.

Additionally, older cartridges from the black powder era have a slightly different naming convention. These cartridges were named for the caliber of the cartridge followed by the standard load of powder and (occasionally), the bullet weight in grains.

For instance, the .45-70 Government was also known as the 45-70-405. The cartridge received that name from the fact that that it fired a 405 grain .45 caliber bullet propelled by 70 grains of black powder.

To make things even more confusing, most cartridges that were designed in other countries use land measurements.

Take the 7.62x39mm cartridge used by the AK-47 as an example. At first glance, this cartridge would appear to use a bullet with the same diameter as the .30-06 Springfield since they are both 7.62mm cartridges.

For some applications, such as purchasing a bore snake for your gun cleaning kit, that difference is not significant at all. Since they are usually sold to fit a range of bore sizes, a .30 caliber bore snake will work equally well on rifles chambered in .30-06 Springfield, .303 British, and 7.62x39mm (among others).

While it may seem obvious, the way to avoid problems with improperly sized bullets is to shoot the right ammunition in your guns. If you’re hand loading, you should use a reputable reloading manual to ensure you’re 100% certain you’re using the right sized bullet when hand loading for a particular cartridge. It should also go without saying, but I’ll say it anyway: you should only shoot ammo in the caliber marked on the receiver or barrel of the firearm you’re using. Don’t ever try to mix and match different cartridges, even if you think that they are actually the same size.

Finally, what about metric cartridges like the 7.62x51mm NATO?

So, what the heck does all this mean to the average shooter?