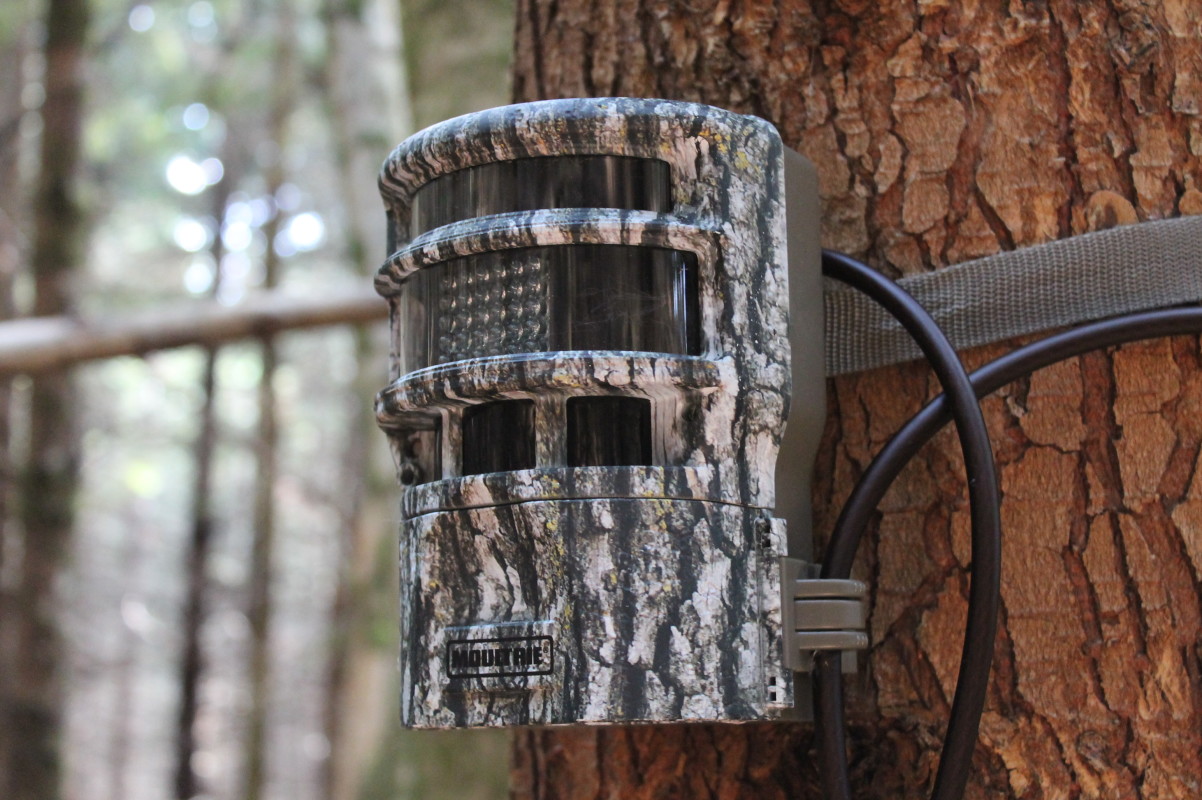 The rotating camera can take pictures three distinct “zones” across the camera’s field of view. According to the preferences of the user, the Moultrie Panoramic 150 can take a single photo in whatever zone triggered the camera, a video in a single zone, sequential photos in all three zones stitched together in a panoramic photo, or time lapse photos for a specified time period. The camera is also set up to take photographs and video at night using a “Low Glow” infrared flash.

The primary feature of the Moultrie Panoramic 150 is its ability to detect movement and take photos over an extremely wide field of view. As you can see in the photo sequence below, the camera originally detected the little buck in the right most zone and photographed of him as he approached. The camera then switched to the center zone when the deer was directly in front of the camera. This example demonstrates the usefulness of the camera’s wide field of view. If the buck did not move directly in front of the camera, but instead kept moving off to the right side, a traditional camera would not have ever known he was there.

The Moultrie Panoramic 150 also takes very high quality photographs at night. The camera has a “motion freeze” feature that significantly reduces blur on moving animals during the night. As you can see in the photograph below, the infrared flash also has a very long range and can illuminate objects 50+ feet away. Additionally, the photos are of high enough quality that the viewer can pick out all of the details present, such as the tiny nubs on the young buck in the photo below.

The other really cool feature of the Moultrie Panoramic 150 is the ability to take panoramic photos. As you can see in the photo below, the panoramic photos are of pretty high quality. When viewing the images on a computer, you can zoom in quite a bit to see all sorts of small details in the photo. There are some slight issues with the images not lining up 100% where the photos are stitched together, but I consider the problem to be pretty minor.

The biggest problem that I have with the panoramic mode is the movement and noise created by the camera rotating. I was actually in a tree stand observing the little buck in the photo below as he ate from the feeder. Since he kept moving around in front of the camera, it kept taking panoramic photos of the scene. He heard or saw the movement of the lens and got spooked as a result.

After I observed this incident, I immediately changed the settings on the camera to take only single zone photos. I later observed several other deer, including the same little buck, eat from the feeder and they took no notice of the camera. Though the camera is not excessively loud or disruptive, it pays to be very conservative when operating the camera in close proximity to animals to avoid spooking them. Due to this, I only use panoramic mode when I have the camera located a moderate distance (>10 yards) from where I expect game to be while taking time lapse photos.

As mentioned above, the Moultrie Panoramic 150 can be programmed to take time lapse photos of an area that you wish to photograph, but where the camera will not necessarily be traditionally triggered, such as a food plot. The camera will take photos at a programmed interval during two periods over the course of the day: the morning and evening. As you can imagine, this results in a tremendous number of photos being taken, which dramatically reduces battery life.

To illustrate, I recently enabled the time lapse feature on my camera and set it out for 6 days. It took one photo each minute for the first and last three hours of daylight each day and was motion activated during the night. During this period, the camera took over 2,000 photos and the batteries were showing less than 20% power remaining when I took the camera down. Obviously, most of the photos were of empty forest, but there were a few interesting sequences and it was useful for learning about how the animals moved in the area. Below is a very small sample of those photos.

The Moultrie Panoramic 150 can also record video footage of game animals. Though the daytime video quality is not great, it is still pretty good, as you can see in the video of the bear. However, I’m very impressed with the quality of videos taken during the night with this camera. The infrared flash illuminates everything within about 60 feet of the camera very well and allows the viewer to pick out lots of detail in the scene.

The Moultrie Panoramic 150 comes standard painted in Mossy Oak Treestand camouflage pattern. This, combined with the “Low Glow” infrared flash is supposed to make the camera much more difficult to spot when placed in the woods. Though not invisible by any means, the camera blends in reasonably well with the natural foliage, especially when placed on a tree of similar color.

The “Low Glow” infrared flash is not invisible either, but does not have a large signature that will attract attention. When looking directly at the flash at night, the lights simply glow red while the camera is taking photographs or video. An animal or human that happens to be looking directly at the camera will probably notice the lights, but they are not excessively bright or attention grabbing.

As you can see in the photo above, the camera is also set up to be compatible with Python Security cables (sold separately). I’ve used 3/16″ and 5/16″ cables with this particular camera and both work well, though a 5/16″ cable is the largest cable that will easily fit through the loops on the back of the camera.

Both Moultrie and CamLockBox make security boxes specifically designed for to provide additional protection for the Moultrie Panoramic 150 from bears and unscrupulous humans alike. Though they provide a certain amount of peace of mind, neither the cables nor the security boxes can be relied upon to stop a determined thief.

It is possible register the camera by serial number with Moultrie and set up a password on the camera that is required before use, which I highly recommend. Even if a person does steal the camera, the password may prevent them from using it. It also gives the user a slight chance that a stolen camera may one day be returned to the user. Especially if using the camera on public land, I recommend taking all possible precautions to prevent your camera from being stolen.

Additionally, though I wasn’t using a security box, I did discover that a security cable will prevent a bear from pulling the camera off a tree, as you can see in the video below. Bears are very curious animals and many hunters have had their cameras damaged by bears over the years. Using the camera in conjunction with a security box is probably a good idea for users in bear country.

The camera is also relatively intuitive to use and the instructions are easy to read. I’ve never had any problems getting the camera set up to do what I want it to do. The Moultrie Panoramic 150 is also compatible with regular SD cards and the SD card slot is easy to reach and it is a simple matter to switch out cards in the field.

Though there are smaller cameras on the market, the Moultrie Panoramic 150 is reasonably sized. The dimensions of the camera are 7.5″ x 9.5″ x 5″ and it weighs just over 2 pounds. It fits easily into a standard backpack with plenty of room to spare.

I was also impressed by the camera’s very fast trigger speed. I’ve never actually measured the trigger speed, but it is by far the fastest of the four trail cameras I’ve owned. As long as you set it up properly, you won’t get many photographs of the tail end of animals as they walk past the camera. Finally, the camera seems to be pretty durable and reliable. I’ve never had a single issue with the camera, even though it has been out in the woods for many cumulative months during the time I’ve owned it.

The Moultrie Panoramic 150 has a pretty good battery life. This summer, I had the camera set up for approximately two months. During that time, the camera took several hundred photographs and videos of wildlife. When I finally took it down, it still had over 50% battery power remaining.

The camera gets this extremely long battery life by running off of 6x C-cell batteries. I find this annoying because C-cell batteries are heavier, more expensive, and more difficult to find than AA batteries, which is what all my other trail cameras use. However, the Moultrie Panoramic 150 does have significantly better battery life than all of those other cameras, so I don’t consider it to be a deal breaker. Just be aware of this fact before you purchase the camera.

The other issue I have with the camera is its cost. The MSRP of the Moultrie Panoramic 150 is $239.99, though you can usually find it for cheaper online at Amazon. Once again, I don’t consider this to be a deal breaker. Though this camera is more expensive than many other cameras on the market today, I feel that you really do get what you pay for. Additionally, the camera is relatively common and I’ve seen it for sale in all of the major hunting retailers near me, in addition to being sold online.

Overall, I’m quite happy with the performance of the camera. It has a fast trigger speed, excellent field of view and detection range, takes high quality photos and video, is not excessively large or heavy, and the batteries last a long time. If you’re in the market for a trail camera, I highly recommend purchasing the Moultrie Panoramic 150 and it makes a great gift for a hunter. Though it is on the expensive end of the scale when compared to other trail cameras, you get what you pay for and it will serve you well.

Update 8 July 2016: When I pulled my camera out of storage in order to start preparing for the upcoming hunting season, I couldn’t get it to boot up correctly. When I turned it on, it would ask me for the security code, but freeze up after I entered it. After messing with it for a while and trying everything else I could think of, I tried the advice offered by DocHolliday DDS in the comments section below.

As it turns out, there was something wrong with my memory card. After I formatted it (FAT 32 format) on my computer, the trail camera worked perfectly. So, if you run into similar problems with your camera, try a different memory card or format the one that was not working. Thanks for the advice DocHolliday DDS!