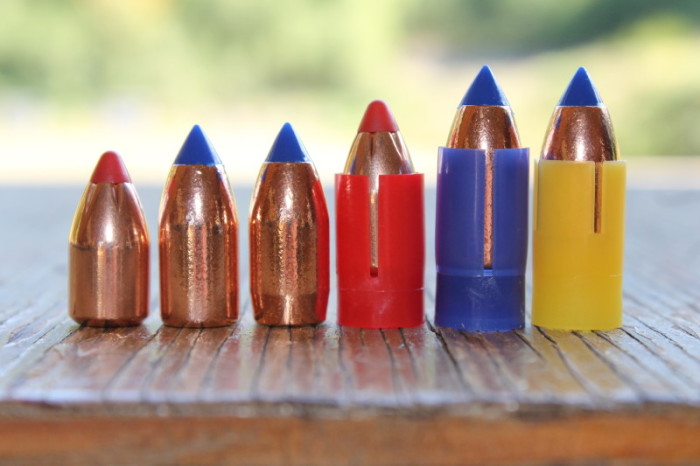 As hunting season has gotten closer, I’ve done more testing to determine the best bullets to use in my CVA Wolf Northwest muzzleloader for hunting this year. The folks at Muzzle-Loaders.com were kind enough to send me three different bullets to test out in my muzzleloader: the Hornady 250gr SST, the Barnes 250gr Spit-Fire TMZ, and the Barnes 250gr Spit-Fire T-EZ. I shot them from both from a bench rest as well as from a “semi-supported” field shooting position. Additionally, I also evaluated each of the bullets on how easy they were to load and how the accuracy of each bullet changed when I didn’t swab the bore between shots (simulating taking a second shot while hunting).

Before we get started, here’s a disclaimer: the links below to Muzzle-Loaders.com are affiliate links. This means I will earn a small commission if you make a purchase.

This commission comes at no extra cost to you. This helps support the blog and allows me to continue to create free content that’s useful to hunters like yourself. Thanks for your support.

All three bullets are high quality bullets made by respected ammunition manufacturers specifically for hunters using muzzleloaders. They are all polymer tipped, .45 caliber bullets fired from sabots, which allows them to be fired at higher velocities, with correspondingly flatter trajectories than conventional full-bore, round or flat nosed bullets. The polymer tip also helps initiate bullet expansion even at the lower velocities (compared to centerfire rifles) obtained when shooting muzzleloaders.

The Hornady SST is an adaptation of their “Super Shock Tip” line of bullets that they designed for many centerfire rifle cartridges. As is typical for many modern bullets, the SST has a copper jacket covering a lead core. As best as I can determine, the jacket is not bonded to the lead core.

In addition to the polymer tip, the SST has a boat-tailed design to make the bullet more aerodynamic. Hornady also produces a 300gr version of the SST for use in muzzleloaders. The 250gr SST bullet (without the sabot) is .451 caliber, .95″ long, and has a ballistic coefficient of .210.

The Barnes Spit-Fire TMZ and T-EZ bullets are 100% copper bullets specifically designed for rapid, but controlled expansion and deep penetration. This makes them good choices for hunters who live in states, like California, that mandate the use of lead free bullets. Since the bullets are all copper, and copper is less dense than lead, 100% copper bullets must be longer than bullets of the same weight and diameter that contain lead. This is why both the TMZ and T-EZ are slightly longer than the SST even though they all weigh 250gr.

Though the TMZ and T-EZ are very similar bullets, they are not exactly the same. The T-EZ is designed for easy loading in muzzleloaders with tight bores and has a slightly smaller sabot to help achieve this. The other big difference is that the TMZ has a streamlined boat-tailed profile that is slightly more aerodynamic than the flat based T-EZ.

I shot all three bullets from a bench rest at a paper target 100 yards away to compare the accuracy of each bullet. When shooting for accuracy, I swabbed the bore with one wet patch, one dry patch, and fired one musket cap between shots to ensure conditions were as consistent as possible. Each bullet was propelled by 90gr Goex FFg black powder (measured by volume) during the testing. I used my chronograph to check the velocity of each load and measured each group size.

The results are in the table below.

As you can see in the table and in the photo below, the Hornady SST bullets were extremely accurate and shot the smallest group of the three bullets. Any “off the shelf” rifle/ammunition combination that shoots sub-MOA groups is doing very well. With this performance, the Hornady SST bullets are certainly accurate enough for me to use at any reasonable range (<125 yards) while hunting this year. Additionally, they were extremely easy to load and their accuracy did not seem to degrade very much after shooting several shots in a row without swabbing the barrel.

On the other hand, I was disappointed in the performance of the Barnes TMZ bullets. Even when I swabbed the bore after each shot, they were extremely difficult to load and did not shoot very well. Initially, I was shooting 6-8″ groups with the Barnes bullets.

However, I did not have the appropriate bullet aligner on my ramrod and I was having a hard time properly seating the bullets without damaging the polymer tip. Once I started using the proper bullet aligner tool (Muzzle-Loaders.com sells a really nice universal attachment), my group sizes improved dramatically. However, I was still not happy with a 3″ group at 100 yards.

The difference between the two bullets was truly night and day: the T-EZ bullets were much easier to load and shot significantly better than the TMZ bullets. Though they were not quite as accurate as the Hornady SSTs, I was still pleased with their accuracy. Additionally, their performance did not significantly change when I did not swab the bore between shots.

As far as external ballistics goes, there is virtually no difference between the three bullets. All have nearly the same muzzle velocity, muzzle energy, and trajectory. However, the T-EZ lags slightly behind the others in these areas, though not by much, due to its slightly lower ballistic coefficient and muzzle velocity.

All of the bullets are suitable for shots on game out to 100 yards (maybe slightly further) with no holdover and all are powerful enough to ethically take medium sized game at the ranges I’ll be shooting.

After shooting for accuracy, I fired the SST and T-EZ a couple of times at a paper target at 50 yards and a 6″ steel plate at 75 yards from shooting sticks. The purpose of this was to see how they did under slightly more realistic “field” shooting positions and to see how easy they were to reload. Both bullets did very well: reloading was easy, all shots struck within 1″ of the bulls-eye at 50 yards, and all hit the steel plate.

Though I did not get the chance to compare the terminal performance of the bullets, the steel plate test did provide another piece of useful information to me about the T-EZ. When checking the target, I noticed a shiny piece of metal in the grass near the plate. Upon closer examination, I realized that it was a T-EZ bullet that I had just shot at the steel plate.

After hitting the steel plate, the bullet expanded to 1.46″, yet still weighed 232 grains (93% weight retention). I mention this because it demonstrates the durability of Barnes bullets under the most extreme circumstances. No animal, not even a big feral hog or a Cape Buffalo (not that I recommend shooting a Cape Buffalo with a 250gr T-EZ), has a shoulder anywhere near as tough as an AR500 steel plate.

If the Barnes T-EZ was able to remain intact and retain over 90% of its mass when striking a steel plate (a feat few hunting bullets can match), then it will likely perform in a similar or better manner when it strikes a big game animal. While this situation does not demonstrate how deep or consistently the T-EZ will penetrate on an animal (that’s for another day), it absolutely demonstrates that the Barnes T-EZ will probably remain intact and not fragment when striking a rib or a shoulder blade in a big game animal.

I can only speculate on how well the SST performed compared to the T-EZ in this case, as I did not recover one after it hit the steel plate. However, I doubt the SST, with its thin copper jacket and un-bonded lead core would have done nearly as well as the T-EZ.

Overall, I’m very pleased with how well the Hornady SST and the Barnes T-EZ did out of my CVA Wolf Northwest. Both were accurate enough for me to use at the ranges I’m likely to take a shot at while hunting this year. Both were easy to load and both performed well when I did not swab the bore between shots.

I’ve still got some more testing to do to compare how well each bullet penetrates. That being said, right now I’m leaning towards using the Barnes T-EZ  as my primary hunting bullet this year since it will likely offer superior penetration and more reliable expansion than the Hornady SST.

For more detailed information on learning more about hunting with a muzzleloader, check out these other articles:

How To Hunt With A Muzzleloader

Blackhorn 209 vs 777 vs Goex Black Powder: Which One Should You Use In Your Muzzleloader?

9 Of The Best Muzzleloaders For Hunters In 2021

5 Best Traditional Muzzleloaders For Hunters In 2021

101 Best Gifts For Hunters To Put On Your Wish List

I shot my first blacktail (and my first deer with a muzzleloader) a couple days ago using the CVA Wolf Northwest and 250gr Barnez T-EZ bullets. Both the rifle and the bullets performed well. I hit the deer on the right shoulder as he was quartering towards me. The T-EZ destroyed both lungs and exited just behind the left shoulder. The deer ran less than 30 yards after the shot.

NEXT: 11 OF THE BEST MUZZLELOADER BULLETS FOR HUNTERS