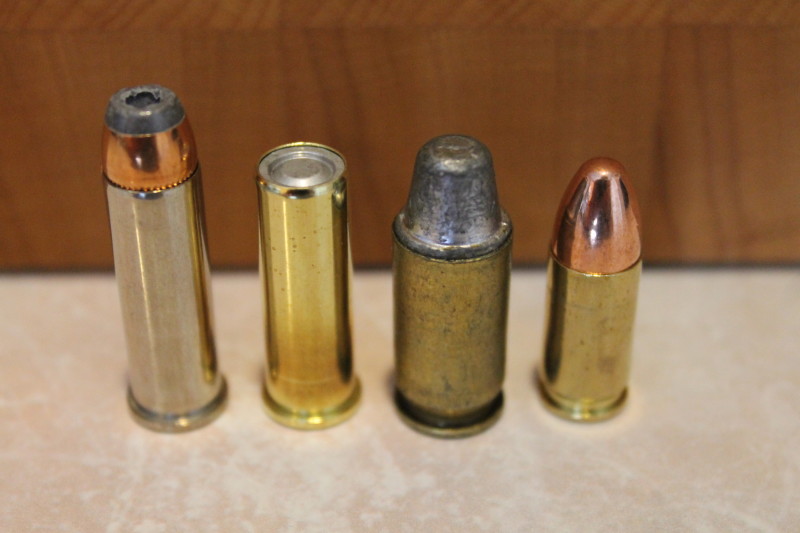 Ever asked the question: what is a wadcutter bullet?

If you’re new to the shooting community (or even if you’re a veteran shooter), then you could be forgiven for wondering what a wadcutter bullet is. The oddly shaped bullet isn’t very aerodynamic, they aren’t loaded to a high pressure, and they aren’t very common bullets.

So why would anyone want to use a wadcutter bullet?

Well, the fact of the matter is the wadcutter bullet (and its cousin the semi-wadcutter bullet) is a very specialized tool designed to excel in a particular role.

The wadcutter is a relatively specialized bullet type that is only utilized in a few different cartridges (particularly .38 Special). As you can see in the photos below, a wadcutter bullet has a flat front and is typically cylindrical in shape.

Additionally, the bullet is usually all lead and has no jacket, which is why they are sometimes referred to as lead wadcutter bullets. Wadcutters are commonly (though not always) loaded so that the bullet is completely encased in the case. Some wadcutters have a flat base, but bullets with a hollow base are probably more common.

The flat shape of the nose is the primary feature of the wadcutter bullet. Designed for competitive shooting, the flat nose and sharp shoulder of the bullet ensures that it cuts clean, “cookie cutter” round holes in the target. This makes scoring the shooter much easier, especially when compared to the small, ragged holes that full metal jacket (FMJ) bullets punch in targets. As you can see in the photo below, there is a dramatic difference in the size and shape of the holes that the .38 Special wadcutter bullets make in a paper target compared to a regular round nose full metal jacket round.

Since wadcutters are almost always unjacketed and have long bearing surfaces, factory loads are usually loaded to shoot at low velocities to minimize the deposit of lead into the rifling in the barrel and to keep chamber pressures at safe levels. As a result, most factory wadcutter loads shoot at 900fps or less, typically 700-800fps in full sized handguns and 500-600fps in short barreled pistols. The low velocity of these rounds significantly reduces their recoil.

This, combined with their generally excellent accuracy at short to moderate range, also makes the wadcutter an ideal choice for people learning how to shoot. It’s still a good idea to wear ear protection when shooting wadcutter ammunition as well.

Many of the major ammunition manufacturers (like Federal and Sellier & Bellot) produce wadcutter loads designed for target shooting.

Wadcutter Bullets For Hunting And Self-Defense

Like the RWS H-Mantel, the wadcutter is very good at the job it was designed for, but it struggles in applications outside of its primary use. Unfortunately, the shape of the bullet, combined with the extreme low velocity of the round, also decreases the effectiveness of wadcutters when used for self-defense.

Though it is absolutely capable of causing severe injury or death, there are many better choices for self defense these days than wadcutter bullets. As a result, wadcutter bullets should only be used for self-defense purposes if there is nothing else available. These shortcomings also make the wadcutter a less than ideal choice for hunting big game.

Handloaders can sometimes improve the performance of wadcutter bullets for self-defense use by using had cast bullets and loading them to slightly higher pressures than factory loads. Others will take hollow base wadcutter bullets and seat them upside down for use as self-defense ammunition. However, this article is focused primarily upon factory watcutter bullet loads and I won’t go into detail on the advantages or disadvantages of (or endorse) either method.

Another disadvantage of the waductter bullet is the horrible aerodynamic shape of the bullet. This restricts the use of wadcutters to relatively close range (<50 yards). Though this is not often an issue for most handgun shooters, it can be a problem for people shooting wadcutter bullets out of a carbine. Additionally, wadcutters are difficult to quickly load due to the blunt, un-tapered shape of the bullet.

This also makes for feeding problems when used in semi-automatic pistols. As a result, full wadcutter bullets are almost always used in revolvers, with .38 Special being the most common caliber.

Though full wadcutter bullets are often unreliable in semi-automatic pistols (except for the Smith & Wesson Model 52), semi-wadcutter bullets usually work much better. The .45 ACP cartridge in the photo above utilizes a semi-wadcutter design, which is basically a traditional wadcutter that is conically shaped and has a flat tip. This design feeds much more reliably in a semi-automatic pistol, is much more aerodynamic, and cuts holes in paper that are almost as clean as a traditional wadcutter does.

The semi-wadcutter bullet is also much more effective for self-defense and big game hunting than the traditional wadcutter.

Even taking into account the below average performance of the wadcutter bullet in hunting and self-defense situations, it is still a pretty useful bullet for target shooting and training new shooters. Luckily, the semi-wadcutter bullet provides almost all of the benefits of the wadcutter bullet without a number of the disadvantages (though I would still prefer a jacketed hollow point over a semit-wadcutter for most hunting or self-defense applications). If you own a revolver, especially one chambered in .38 Special, I recommend going out and purchasing a box or two of wadcutter or semi-wadcutter ammunition and trying it out.