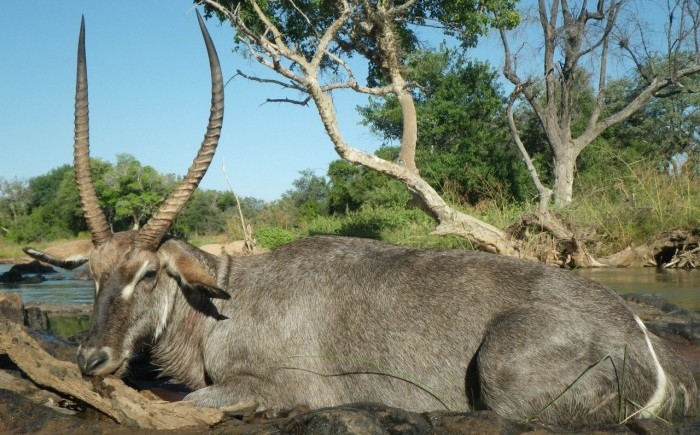 Check out this article on how to take a good trophy photo.

Congratulations! After investing a great deal of time, energy, and money, you finally bagged the trophy of a lifetime. The best way for you to preserve the memories of this hunt forever, while at the same time paying proper respect to the animal, is to take a good trophy photo.

Most of us have limited space for taxidermy in the house, but photographs are cheap and take up almost no space. Unfortunately, taking a good trophy photo is a task that countless hunters mess up each year, wasting a precious opportunity to capture the moment. On your next hunting trip, make sure you follow these tips on how to take a good trophy photo and I guarantee that you will appreciate the results.

Note: Some of the links below are affiliate links. This means I will earn a small commission (at no extra cost to you) if you make a purchase. This helps support the blog and allows me to continue to create free content that’s useful to hunters like yourself. Thanks for your support.

The best time to take a trophy photo is immediately after recovering the animal. The animal will look more “fresh” in the photographs and will be easier to move around before rigor mortis sets in. However, this means that you must either be carrying all of the proper equipment necessary to take the photograph or have it quickly accessible.

The most important piece of equipment that you’ll need to take a good trophy photo is a good camera. Though carrying a high quality camera is great, there is not necessarily anything wrong with using a cell phone to take pictures with, just make sure you use one with a good camera.

For what it’s worth, I bought a Canon EOS Rebel T3 several years ago on the advice of my cousin (who is a professional photographer). Looking back on it, buying that camera is one of the best decisions I’ve ever made. Yes, it’s a lot bigger and heavier than a cell phone, but it takes much better quality photos. When using a good telephoto zoom lens, that’s also a wonderful camera for wildlife photography in general.

The exact camera you buy doesn’t matter too much. Most of the models produced by the major camera companies are reasonably priced, easy to use, and take good quality photos. All things considered, a mid-end DSLR camera by Nikon or Canon will likely serve you very well.

I cannot emphasize this enough: no matter what camera you decide to carry, make sure you know how to use it. Trying to take a good trophy photo of the buck of your dreams is not the time you should be learning how to use your camera. It does you no good to take the time and create the perfect setting for your trophy photo if the camera isn’t focused properly or the flash won’t go off.

Additionally, try to use a camera that has either a timer setting or a remote. This is especially important when hunting along and there is nobody around to photograph you with the animal. However, this can still be helpful when hunting in a group as it will allow you to photograph the entire hunting party at once.

As I’ll discuss later, some of the best trophy photos are those taken from an extremely low angle, which often necessitates laying on the ground. A poncho or other piece of waterproof gear can be very helpful by keeping the photographer dry if the ground is wet or muddy.

Finally, if at all possible, carry a small tripod with you as well. This will help ensure that the camera is held steady and level during shooting and greatly assist when taking a group photo. I took the photo below using my Canon EOS Rebel T3 camera. Since I was alone, I mounted the camera on a tripod and used the timer setting to take the photo.

Prepare the Animal and the Scene

Remember: the animal (not the hunter) should be the focus of any good trophy photo and that all trophy photos should be taken in a manner respectful to the animal. Whenever possible, take your trophy photos in a natural setting (preferably in the area the hunt occurred). Whatever you do, ensure that there is nothing distracting or inappropriate in the background of the photograph. Also, please do not take a photograph of an animal in the back of a truck.

One of my favorite poses is to place the animal in a bedded down position with the legs folded up underneath the body. Then, use a stick, rock, or your hand to support the animal’s head during the photographs. If possible, position the animal so that the horns or antlers are silhouetted against the sky. Remove vegetation or other objects from in front of or behind the animal that may cause a distraction in the photo.

Additionally, take your trophy photos from a low angle. This emphasizes the size of the animal. The two photos below are of the same buffalo, but notice how much more impressive it looks when the photograph was taken from a low angle.

Before taking the photograph, do your best to ensure that you remove excess blood from the animal. Depending on the situation, I like to either use water or dirt to wash away or obscure the blood. In addition to the actual bullet or arrow wound, don’t forget to clean up the mouth and nose of the animal. Finally, stick the tongue back in the animal’s mouth before taking the trophy photograph.

The photograph below is in my opinion, almost perfect. The animal is clean and sitting in a dignified position near the area where the hunt occurred. For the most part, the horns are silhouetted against the sky, and the background enhances the beauty of the animal without being distracting. The only thing I can think of to improve this trophy photograph would be to remove the blades of grass that are in front of it.

Don’t forget about preparing yourself for the photograph as well. Avoid wearing sunglasses in trophy photographs. The same goes for hats, since they will often cast a shadow across your face. Generally speaking, it is best to position yourself either next to, or behind the animal in a trophy photo. Make sure you are close enough to touch the animal, but are also positioned off to the side of the antlers/horns.

Take A Variety of Shots

Luckily, digital photos are free and you can take literally hundreds of trophy photos with no problem. Take photos with different settings on the camera, both with and without a flash, or even in black and white or sepia tone. Take photographs from different angles of different poses as well. Also, don’t be afraid to try out a non-traditional pose or some candid shots. There is a very good chance that a pose or camera setting that you did not initially think to try actually ends up being a great trophy photograph.

Keep in mind that you’re trying to tell the story of the hunt with your trophy photograph. Especially if the hunt would not have been successful without the efforts of someone other than the hunter, like the dog in the photo below (who was essential in recovering the impala), make sure you include that member of the team in the trophy photo.

I know that it all sounds really complicated and difficult. Luckily, taking a good trophy photograph is just like anything else: the more you do it, the easier it gets. Take a critical look at some of your recent trophy photos and choose one or two things to improve on next time you go hunting. I guarantee that down the road, you that you will appreciate taking a little bit of extra time to take some high quality trophy photos.

While this article focuses on taking trophy photos after bagging your quarry, more and more hunters are interested in filming their hunt. Read the article below for some tips and tricks on filming your hunt.

How To Film Your Hunt

2 thoughts on “How To Take A Good Trophy Photo”