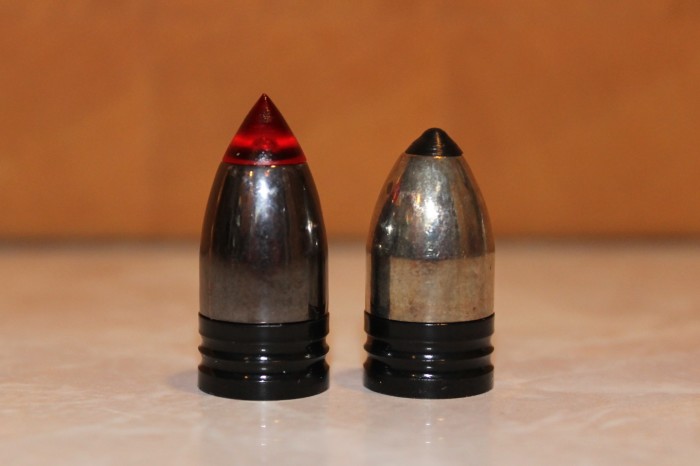 Check out this PowerBelt bullet review comparing the 250gr AeroLite to the 270gr Platinum bullets.

Over the past year, I’ve tried many different muzzleloader bullets and powder loads in my CVA Wolf Northwest to see what works the best. In this test, I decided to conduct a PowerBelt bullet review where I compare their 250gr AeroLite and 270gr Platinum bullets. I shot each bullet with two different powder loads from a bench rest to determine how accurate they were with that particular load.

Before we begin, I have two disclaimers.

First, the links below to Muzzle-Loaders.com (as well as the links to Amazon) are affiliate links. This means I will earn a small commission if you make a purchase.

This commission comes at no extra cost to you. This helps support the blog and allows me to continue to create free content that’s useful to hunters like yourself.

Second, Muzzle-Loaders.com provided the bullets that I used during my range session.

Now that we’ve got that out of the way, let’s get started.

Both the 250gr AeroLite and 270gr Platinum bullets are part of the highly successful PowerBelt bullet line. They are both “full bore” (.499″) bullets that use the patented PowerBelt “snap-on” base, which makes for easy loading, but still creates a good gas seal for higher velocities and consistent pressures.

The AeroLite and Platinum bullets are also both polymer tipped, which gives them slightly higher ballistic coefficients, and therefore slightly flatter trajectories than round, hollow point, or flat nosed bullets. Their polymer tip also aids in bullet expansion even at their relatively low velocities (at least compared to centerfire rifles).

Though the AeroLite and the Platinum bullets are very similar, they are not exactly the same.

The AeroLite is slightly longer and has a slightly larger hollow point for faster expansion and is designed for standard (80-100gr) loads. The Platinum bullets are designed for magnum (110-150gr loads) and have a slightly more robust gas check than the AeroLites to deal with the higher pressures that come with larger powder charges.

Of the two bullets, the AeroLite line of bullets are generally a better choice for deer sized game because they are designed for faster expansion. On the other hand, the Platinum bullets are more solidly constructed, which makes them better suited for larger game like elk.

The AeroLites are available in 250gr and 300gr variants. PowerBelt produces the Platinum series of bullets in 270gr, 300gr, and 338gr variants.

I shot both bullets from a bench rest at a paper target 100 yards away to compare the accuracy of each bullet. I recently purchased a 209 primer conversion kit for my CVA Wolf Northwest and used Winchester 209 primers for this test.

Since the AeroLites and Platinum bullets were designed for use with standard and magnum loads of power respectively, I tested each bullet with two different loads of powder. For the standard load, I used 2x 50gr pellets (100gr total) of Hodgdon’s Triple Seven. For the magnum load, I used 120gr by volume of loose Hodgdon’s Triple Seven. I used my chronograph to check the velocity of each load and measured each group size.

For more detailed information on choosing the right propellant for your muzzleloader, check out these two other articles:

Blackhorn 209 vs 777 vs Goex Black Powder: Which One Should You Use In Your Muzzleloader?

The results are in the table below.

The results of the comparison were not very surprising. As you can see in the table, the AeroLite bullets did better with standard loads while the Platinum bullets performed better with magnum loads. Overall, the AeroLite bullets were the most accurate, with a sub-MOA group using the standard load of powder. However, the results obtained with all the different bullet/load combinations were still acceptable. Additionally, both bullets were extremely easy to load, only requiring a moderate amount of force to properly seat.

As far as external ballistics goes, even though the both bullets had virtually the same muzzle velocity when using the same powder load, the 270gr Platinum bullets had a markedly flatter trajectory due to its heavier mass and higher ballistic coefficient. This was particularly evident at longer ranges. 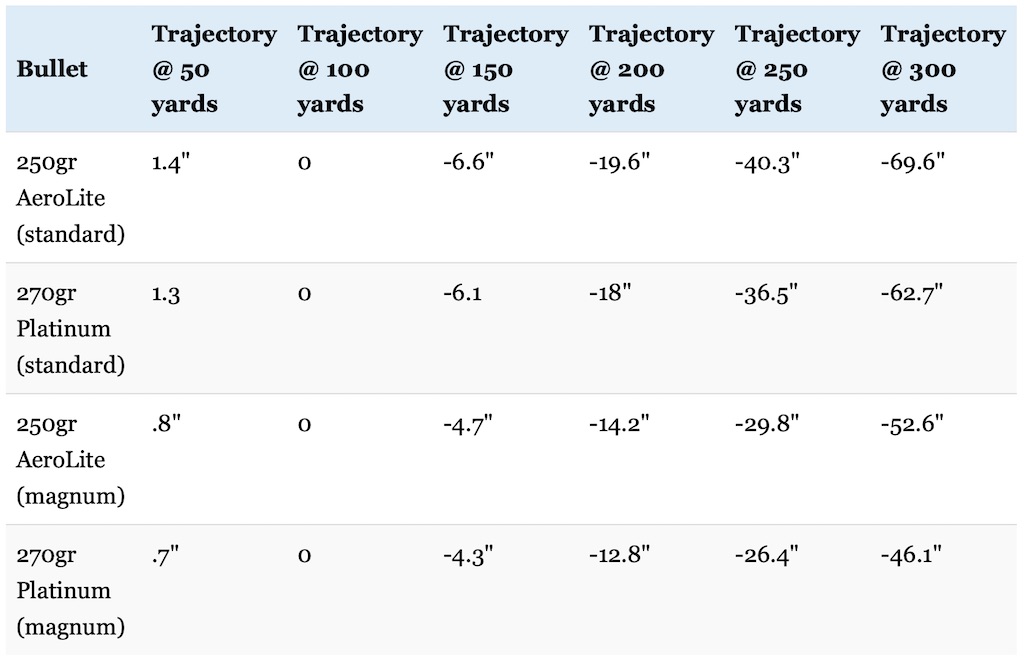 As you can see, there is a trade off with using a magnum load of powder: the accuracy of both bullets declined slightly (but was still acceptable) with magnum loads of powder, but the increased velocity makes range estimation slightly less important.

Even so, the trajectories of both bullets really start to drop off at longer ranges. While using a “magnum” load in this (or any) muzzleloader will not turn it into a precision long range weapon, it does give the hunter the ability to shoot a little bit further, especially on a big target.

Based on the results I obtained, I’d recommend using the AeroLite bullets with a standard load of powder when hunting deer sized game in areas where a longer shot is unlikely. That was the most accurate load, still has a relatively flat trajectory out to 150 yards, and is more than powerful enough to ethically take down a deer or antelope.

I shot a whitetail doe at a range of approximately 50 yards with a 250gr AeroLite back in 2015 and the bullet performed just as advertised: rapid expansion, massive internal damage, an exit wound that left an easy to follow blood trail, and a very short (less than 50 yards) tracking job. I could not have been any happier with the the performance of the bullet.

On the other hand, I’d certainly lean towards using the Platinum PowerBelt bullets with a magnum load of powder if I were hunting in a situation where I was more likely to take a longer range shot (past 200 yards) or if I were hunting larger game like elk. In addition to being specifically designed for use with a magnum load, the Platinum bullets also are heavier and have a higher ballistic coefficient.

Overall, I’m quite pleased with how well PowerBelt AeroLite and Platinum bullets performed out of my CVA Wolf Northwest during my PowerBelt bullet review. Both were accurate enough for me to use on medium sized game at short to medium range. Both were easy to load and both performed well when I did not swab the bore between shots. While I would not necessarily recommend either bullet for use on something really big, like an elk or moose, they are both very good choices for deer hunters. Personally, I’m going to use the 250gr AeroLites with the 100gr powder charge on my next deer hunt.

Both bullets made the cut and I’ve added them (along with the CVA Wolf, which I think is one of the best muzzleloaders currently manufactured) to my recommended gifts for hunters list.

NEXT: HERE’S HOW TO HUNT WITH A MUZZLELOADER