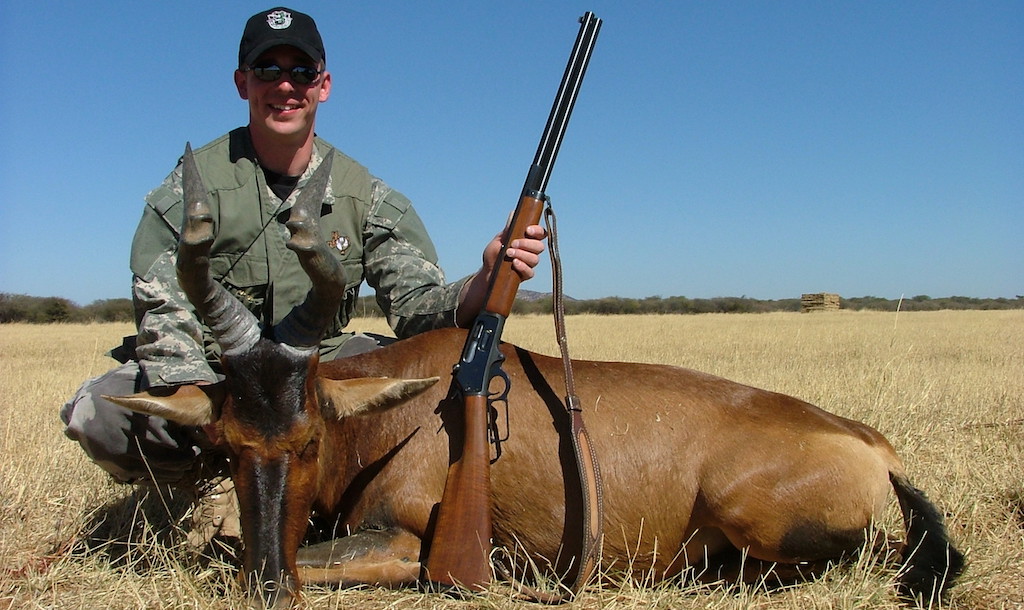 This is the fourth post in a series about my Namibia hunting safari. You can read the previous posts about our preparation for the hunt here, about my first African trophy here and about mine and my father’s kudu here. The subsequent posts about the final days of the hunt is located here while the post about the lessons I learned from the safari is here.

After taking the kudu, the next animal up for me was the Red Hartebeest. While not nearly as large or as striking as a kudu, the Red Hartebeest is still an interesting animal and one that I was very excited to hunt. There were a very large number of Red Hartebeest on his land in several different herds. Since Dirk was relatively new to the hunting business at the time, several of these herds contained trophy bulls that never been hunted before. Feeling like the odds of were in my favor, we began hunting for one the morning after I took my kudu.

The Red Hartebeest is a medium sized (250-400lbs) reddish colored, antelope the ranges over most of Namibia, Botswana, and South Africa. Both males and females have thick horns that grow straight up and then sweep straight backward. It is closely related to the Topi and the Tsessebe. They are gregarious, typically living in herds of around 20 animals and are often observed mingling with other species like the wildebeest and springbok. Red Hartebeest are often found in open areas feeding on grass, which makes up the vast majority of its diet.

The Red Hartebeest can be quite difficult to hunt owing to the fact that they live in large herds in open areas. The lack of cover around them, combined with many sets of eyes on the lookout, makes them difficult to approach. This was especially true for me owing to the fact that I was hunting with rifles not well suited to long distance shooting.

Since I had already taken two outstanding trophies with the Martini-Henry, I decided to hunt for the hartebeest with my Marlin Model 1895 in .45-70 Govt. The maximum range I felt comfortable shooting at with was about 150 yards. Dirk and I set out the first morning on the trail of the hartebeest and eventually found a group that had just left a water hole. We began to follow them and saw a very nice bull in the group. However, the wind changed and they took off away from us at a gallop when they caught out scent. Dismayed, we started to return to the house for lunch.

On the way back, we passed the large field where we had the encounter with the warthogs on my first day in Africa. In addition to warthog, we would often see wildebeest, springbok, and hartebeest in this field. As we approached, we saw that a herd of Red Hartebeest was bedded in the field. Dirk spotted a very large bull with the herd and he stopped the truck. Even though they were bedded down close to the edge of the field, the hartebeest were several hundred yards away and well out of rifle range for me.

We crawled up to a fence at the edge of the field and glassed the hartebeest with our binoculars. The ground was completely flat, covered with short grass, and devoid of anything that could be used for cover or concealment. I was obviously far out of rifle range, so we had to get closer somehow. I was really wishing I was armed with something like a 300 PRC or .300 RUM at that point!

The bull hartebeest in the herd was very large and an exceptional trophy, so we were reluctant to leave them.

Luckily, Red Hartebeest have poor eyesight. With no other options on the table, Dirk presented his idea to take advantage of this weakness: “we will make like warthogs and try to get close enough to them to shoot” he said. So Dirk, Bruno, and I all slipped under the fence and commenced to crawl through the grass towards the hartebeest. Every time one would look in our direction, we would freeze until it looked away. Dirk said that once we got too close, the big bull would stand up and look at us before he would run away. At that point, I should shoot.

We slowly crawled through the grass. The ground was very dry, dusty and covered with sandburs. After only a short distance, the bottom of my forearms and legs were covered with the small, but painful objects. I quickly worked up a sweat under the afternoon sun and soon my arms were covered with dirt as it stuck to my slick, sweat covered arms.  We covered several hundred yards before the bull got too suspicious and stood up to get a better look at us. Unsure of the range, I assumed a prone shooting position, wiped the sweat from my eyes, and fired.

The bullet hit short, kicking up a large plume of dust. The other hartebeest were startled at the shot and started to mill around behind the bull, but he stayed frozen in place. I aimed slightly higher and fired again. The bullet again hit short, but closer to the bull this time. The rest of the herd became more agitated and confused by the unfamiliar noise, but the bull stayed still and continued to stare us down.

By this time, I was extremely frustrated. Both of my shots had perfect windage, but the range was significantly longer than we initially thought. Thinking I probably had one more shot before the big bull took off, I put the bottom of the front sight bead at the top of the bull’s back, took a few deep breaths to calm down, and squeezed the trigger.The hartebeest bull took one leap forward after the bullet hit him, and then lay down. The rest of the herd ran away, leaving him there by himself. He was obviously seriously injured, but he still held his head up and was looking around. Having finally found the range, I took aim again and shot him in the neck and he quickly expired.

We dusted ourselves off and began to walk towards the hartebeest bull. He was significantly bigger than I originally pictured him. This, coupled with the total lack of any references between the bull and us, threw off our range estimations. When I took my first shot, I estimated that he was about 175-200 yards away. When we later measured the distance with a laser rangefinder, he turned out to be closer to 350 yards away from where I shot from. At that range, a 300 grain bullet travelling at 200 fps and zeroed at 125 yards, would hit nearly five feet below my point of aim. That certainly explained why my first shots hit so low!

Had I known how far away he was when I first started shooting, I probably would not have taken the shot. In all of my years of hunting, that is by far the longest shot I’ve ever attempted on an animal.

Just about any of the cartridges below would have been a much better choice for hunting under those conditions.

Even at that extreme range, the .45-70 performed very well. My shot hit him low in the chest breaking both shoulders and hitting the bottom of the heart and both lungs. I recovered the bullet from under the skin on the opposite shoulder and while mangled, it was in remarkably good shape, especially considering that it broke two major bones. The Nosler Partition opened up and expanded beautifully, while still providing the penetration needed to reach the vitals of the hartebeest.

The red hartebeest turned out to be another magnificent trophy. He measured out at over 63” and easily made the SCI Record Book. While he scored very well, that’s not what I will remember him for. I will always fondly remember that hunt for the long crawl through the grass and the sandburs along with the crazy shooting I had to do to finally take him.

NEXT: .375 H&H MAGNUM: THE MOST VERSATILE BIG GAME HUNTING CARTRIDGE OF ALL-TIME?