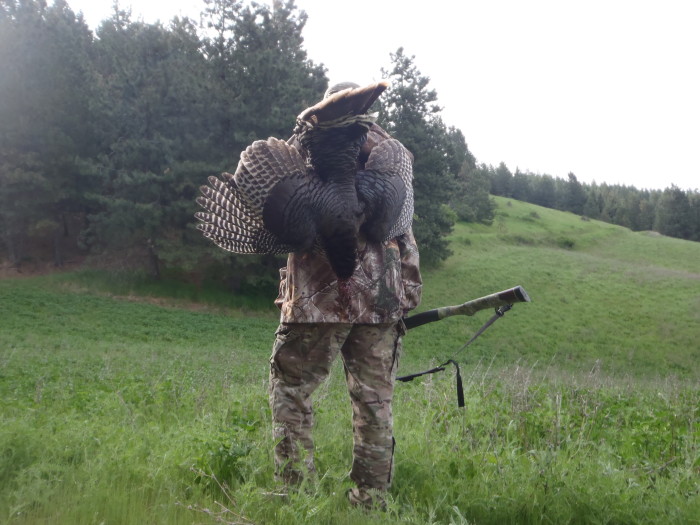 Prior to this year, I’d never seriously been turkey hunting before. I grew up hunting in a part of Texas where turkey populations were very low, and I never seemed to have the time necessary to hunt turkey in New York and Georgia while I lived there. However, I recently had a great opportunity to go on a guided turkey hunt on some private land near Spokane, Washington during Memorial Day Weekend and I jumped at the chance to get my first turkey.

For the past few months, I did my best to prepare for the hunt and learn as much as I could about turkey hunting prior to the big day. Fortunately, I was going to be guided by a man who was a very experienced turkey hunter: Joe, the same guy who was the guide for my wife and me on our pheasant hunt this past January. As it turned out, I had nothing to worry about: Joe knew what he was doing and we were going to hunt land that had a very large turkey population.

On the first day of my hunt, I met Joe around 4:00am and we headed out to our blind together. Located to the southeast of Spokane, the land we hunted was very close to the border with Idaho and was hilly and heavily forested. We hunted overlooking a field near the west side of the property that was approximately 20 acres in area. Many of the turkeys in that area would commonly roost in the trees to our south at night, then move north, up the hill during the day to feed before returning to their roosts at night. Fortunately, the weather was great: sunny skies with light winds and temperatures ranging from 45 to 75 degrees.

Joe had a couple of ground blinds set up along the edges of the woods near the routes turkey would commonly use as they fed up and down the hill each day. The blinds had a mesh screen over all of the openings which enabled us to look out with no problems but made it difficult for animals to see us inside the blind. We wore camouflaged clothing, gloves, and face masks to blend into the darkness as much as possible. As stated in a previous article, I camouflaged my shotgun with camo form wrap to break up the outline of the shotgun and prevent sunlight from glinting off any exposed metal.

Shortly after we got settled into our blind that morning, the woods came alive with turkey vocalizations: hens clucking and yelping and several distinct toms gobbling their heads off as they started to wake up and prepare to leave their roosts. Shortly after daylight, we started to hear the flapping of wings as the turkeys flew down from their roosts and began to move up the mountain. It didn’t take them long to reach the field and I noticed several turkeys moving across the other side. The only problem was that they were over 200 yards away and showed no signs of heading our direction. Over the course of the morning, I saw two toms and nine hens feed up the side of the mountain and we heard another group move through the woods behind us. Joe softly called the turkey using a diaphragm call in hopes of enticing some of them to head our direction.

Within minutes, I saw a head peak up over the tall grass in front of us and head our direction. I started to get excited, but unfortunately, it turned out to be a lone hen. She got within 10 feet of us as she fed all around our blind, occasionally stopping and looking around for that other hen who called to her and should have been feeding there as well. After a few minutes, she headed off to join the rest of the flock as they fed up the hill.

After a few more hours of unsuccessful hunting, we took a lunch break. When we returned to the woods that afternoon, we set up in a different blind close to the route Joe thought the second group of turkeys used when they moved unseen through the woods behind us. After feeding up the hill, he reasoned that they would return the same way they came so that they could roost near the bottom of the hill again that night. With luck, they would move by our blind and give me a good opportunity to shoot one.

Joe called softly and sporadically that afternoon, but got no audible response from any turkeys in the area. However, a lone hen seemingly appeared in front of us and started feeding around 3:00pm. After a few minutes, another hen and a jake joined her. They fed around the blind for nearly 45 minutes and I took this opportunity to get some close range video and photos of them. Prior to that day, I’d never had the opportunity to observe turkey at close range before and I enjoyed the experience.

Unfortunately, no other turkeys appeared and the ones around the blind eventually headed down the hill towards their roost. A few minutes after they disappeared from sight, Joe softly called again. Almost immediately, one of the hens that was just there returned. She appeared almost annoyed and walked around the blind looking for the hen who had strayed from the group. After a few minutes of unsuccessful looking, the hen gave up and quickly made her way back down the hill.

Though we saw no more turkeys that day, we heard at least two toms gobbling from what sounded like the vicinity of the blind we hunted that morning. For the next half hour we could hear the gobbling moving down the hill towards their roost. Unfortunately, we guessed wrong: the turkeys moved uphill in the morning where we hunted in the afternoon and moved downhill in the afternoon in the area we hunted in the morning. Though I went to bed unsuccessful that first night, I was still encouraged. In addition to three deer and three elk, I’d seen fourteen turkeys and heard several others. There were obviously plenty of turkey, to include at least two mature gobblers, in the area. We just needed to get close enough to one of them for a shot.

The next morning, we decided to hunt the same blind we hunted the previous afternoon, in hopes that the turkeys would repeat their behavior from the first day. Since this was the last day of the hunt, Joe and I talked on the way to the blind and he advised me to take the first shot I got at a legal turkey, since we were running out of time and had no idea how many opportunities I would get that day. We got settled into the blind and started hearing some turkey vocalizations just after daybreak. Once it appeared that the turkeys were on the ground, Joe started calling slightly more aggressively than the first day.

Only a few minutes after he started calling, I caught some movement out of the corner of my eye. I slowly turned my head, and identified a solitary turkey moving towards us through the tall grass. I raised my binoculars and saw that it was a hen, but one with a substantial beard, certainly a legal bird and by far the best one I’d had a shot at in two days of hunting. I mentioned this to Joe, who was sitting next to me, and he said that I should take the shot.

I realized that this bird was going to be my first turkey. My breathing rate rapidly increased and adrenaline began to course through my veins. The turkey had no idea that we were there, but she was not acting like she was going to hang out for very long. As she walked from right to left in front of the blind, I slowly and carefully got out of my seat and readied my shotgun to fire from a kneeling position from inside the blind.

Once I was ready, Joe made two sharp clucks from his call. The hen stopped, extended her head, and looked all around for the source of the noise. I covered up her head with the front bead on my shotgun, and fired. She dropped at the shot and was as dead as a hammer in a matter of seconds.

From the time we first saw the turkey to my shot, less than two minutes had elapsed. It all happened so fast that I was more stunned than anything else. However, it quickly dawned on me that I had finally taken my first turkey!

The hen weighed 14 pounds and had a 6″ beard. While my first turkey was not a big gobbler like I dreamed about, there is never another experience like the first turkey, and I was still thrilled with how the hunt went. I saw plenty of birds, heard lots of turkey vocalizations, learned a few things about turkey hunting, and came home with a pretty unique trophy and a cooler full of delicious turkey meat. The big tom will have to wait until next year, but this was still a pretty successful hunt, no matter how you slice it.

My next post will cover some of the lessons I learned during the hunt, along with a critique of my preparation and the gear I used, so stay tuned!

NEXT: HOW TO FIND PUBLIC LAND YOU CAN HUNT ON