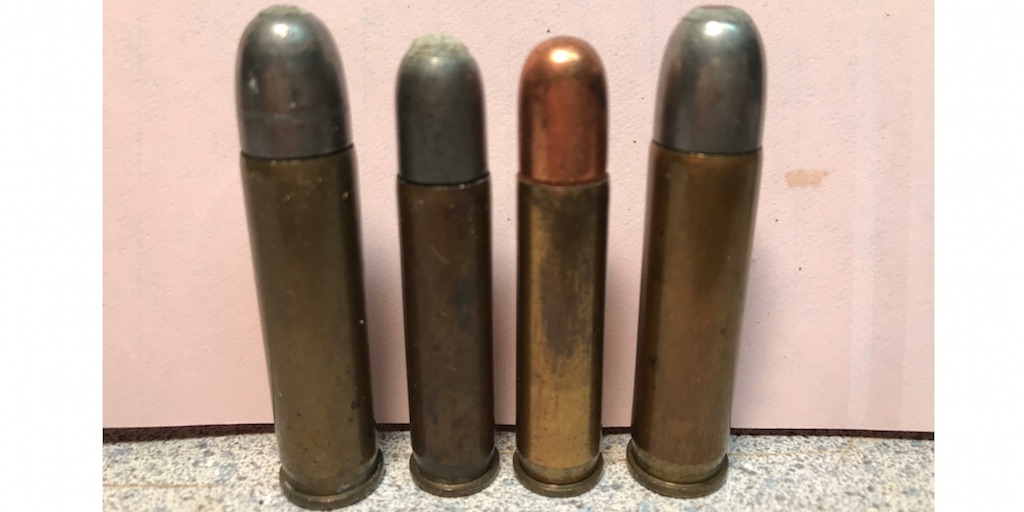 Here’s what you need to know about the 351 Winchester and 401 Winchester Self-Loading cartridges.

I’d submit that for most shooters and hunters, cartridges like the .40 S&W and the 10mm Auto are the first things that come to mind when they think of semi-automatic .40 caliber cartridges. The same probably goes for the AR-15 when they think of a semi auto police patrol rifle. However, the .401 Winchester Self-Loading, which was itself proceeded by the .351 Winchester Self-Loading, and the Winchester Model 1907 and 1910 rifles that fired those cartridges, all filled those roles many decades before anyone ever heard of the 10mm Auto, the AR-15, or the Ruger Mini-14.

In today’s post, my dad will go over the history of the .401 and .351 Winchester Self-Loading cartridges in detail and cover why they were initially developed and why they eventually fell by the wayside.

A blowback action in the most basic autoloading action. In firearms with a blowback action like the Model 1903, the breech is not locked and depends on a balance between the cartridge pressure characteristics, the heavy breechblock, and a powerful recoil spring for reliable functioning. Upon firing, the breechblock is delayed in its opening by its weight and spring pressure until the rising chamber pressure overcomes the inertia of the bolt.

Since .22 caliber cartridges of that time period were not loaded to uniform ballistics, Winchester specifically developed the .22 Automatic Winchester Rimfire cartridge for reliable functioning in the Model 1903 rifle. This cartridge was different from, but looked similar to, standard .22 Long and .22 Long Rifle cartridges. This understandably led to mistakes and confusion among the buying public regarding the proper ammunition for the rifle and hampered sales of what should have been a very popular rifle.

Even so, the Model 1903 rifle was fairly popular and sold approximately 120,000 examples over a production life of 33 years.

During the early 1900s, the folks at Winchester learned that their main competitor, Remington, was working on a centerfire autoloading rifle suitable for hunting big game. The leadership at Winchester realized that a large untapped market existed for the winner of the autoloader race, so they were determined to beat Remington to the punch and release their self-loading rifle first.

However, Winchester experienced great difficulty in the development of their autoloading rifle and the unique calibers designed for it. Specifically, they had a significant problem developing a caliber powerful enough to be suitable for big game, yet usable in the 1903 type “blowback” autoloading action.

After two years of development, Winchester did beat Remington to market with the Winchester Model 1905 rifle. However, the calibers available in the Model 1905, the .32 Self Loading (.32 SL) and the .35 Self Loading (.35 SL), were realistically pretty underpowered for satisfactory use on big game.

Neither Winchester cartridge was truly suitable for anything larger than small deer, and that might have been pushing it. Realistically, the Winchester Model 1905 was only useful to control vermin around the farm or for taking small game. Due in large part to the limited utility of those cartridge, the Model 1905 was not a major commercial success. Winchester only sold about 29,000 Model 1905 rifles from 1905 to 1923.

That being said, some good did come out of the money and time spent on the development of the Model 1905 and the accompanying cartridges that would help the company in the future. Indeed, Winchester used the .32 Self Loading as the basis for development of the .30 Carbine cartridge in the early 1940’s.

Winchester took the lessons learned from the Model 1905 in stride and incorporated some changes into the new Winchester Model 1907 rifle and the accompanying .351 Winchester Self-Loading (.351 WSL) cartridge they released a few years later.

Finally, Winchester had developed an autoloader powerful enough to truly be used on North American big game. Commonly known as the Model 07, the Model 1907 rifle was also popular for law enforcement use. Equipped with 10 round magazine to go along with a slightly beefed up forened and buttstock to resist cracking, many Model 1907 semi-auto rifles were acquired by many police departments to serve alongside the Thompson submachine gun in .45 ACP in an effort to give their officers more firepower.

The Model 1907 enjoyed a long production run of over 51 years and Winchester finally stopped manufacturing it in 1958. During that time, Winchester produced over 49,000 rifles, including over 8,000 produced during World War I and World War II. Probably well over half of the production for the last ten years went to police organizations in the United States.

As commercially successful as the Winchester Model 1907 and the .351 Winchester Self-Loading were, Winchester was still not quite satisfied. For that reason, Winchester decided to build what would become the biggest brother to the preceding lines of self-loaders and the only one that truly was capable of taking big game or of competing on equal terms with Remington’s recently introduced Model 08.

Using basically the same action, they introduced the Winchester Model 1910 semi-automatic rifle along with the .401 Winchester Self Loading (.401WSL) in the spring of 1910. The .401 WSL fired a 200 grain .406”caliber soft point bullet at 2,140 feet per second for a walloping 2,034 ft-lbs of energy. Winchester also produced a load firing a 250 grain bullet at 1,870 feet per second (1,942 ft-lbs of energy). These ballistics were far better than the .351 WSL and even put it slightly above the .35 Remington in terms of kinetic energy.

Unfortunately for Winchester, the Model 10 was not a good seller and the company only produced about 20,000 produced before dropping it from production in 1936.

Final Thoughts On The 401 And 351 Winchester

Though Winchester Self-Loading Rifles in .351 WSL and .401SL are not in the same league as bolt action rifles chambered in .308 Win or .30-06 Springfield, that’s not really a fair comparison. Having owned several different rifles chambered in .351 WSL and .401 WSL over the years, I can attest to the fact that they are quite good at what they were designed to do: cleanly take North American deer and black bear size game when hunting in close cover where quick shots might be called for. It puts down Whitetail deer and wild hogs quite nicely.

Having said that, it must be noted that the rifle and caliber combination is certainly not perfect. Due to its blowback action, the rifle kicks like a mule. At the same time though, the Remington Model 8 also kicks a lot more than you would expect considering the rather mild calibers they were chambered for.

In both cases, the recoil is the result of the action types used on these early autoloaders. It feels like you get an initial kick when the gun goes off, which is then followed immediately by even harder hit when the heavy movable actions parts slam to the rear of the rifle.

The Model 1910 rifles were also prone to cracking of the forearm. Probably over half the Model 1907 and 1910 rifles I’ve examined over the years have a cracked forearm. I’ve repaired several successfully. They also balance rather far forward due to the very heavy breechblock extension that looks like an operating rod under the barrel. Finally, they are on the heavy side at 8.5 pounds.

All that being said, if one were interested in hunting with a very unique rifle that you would be very unlikely to encounter in the woods in the hands of another hunter, the Winchester Model 1907 and Model 1910 autoloaders in .351 Winchester or .401 Winchester would be a great choice.

They are still around, although finding a pristine example will be tough. Most have had an active life in the woods earning their keep, not being just stored away in the closet. Unfortunately, finding .401 or .351 Winchester ammo is also pretty difficult as well, though it’s still possible to find the odd box of factory ammunition and the necessary reloading supplies from places like Buffalo Arms. Both cartridges use an unusual bullet diameter (.352″ and .406″ respectively), but it’s still possible to find soft point, FMJ, or cast lead bullets to use for reloading.

If you’d like to read some of the other posts my father has written for this blog, visit the links below:

The .219 Zipper: A Good Cartridge That Didn’t Quite Pan Out

One Man’s Attempt At Explaining Hunting To Non-Hunters