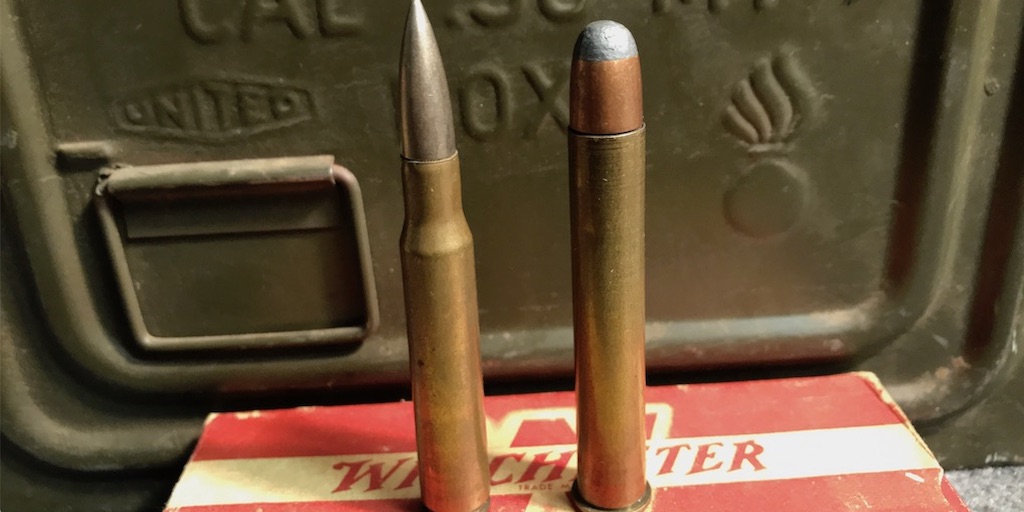 Here’s everything you need to know about the .405 Winchester.

The first thing that probably comes to mind for most hunters familiar with the .405 Winchester is President Theodore Roosevelt and his famous use of the cartridge during his 1909 African Safari. While he did indeed use a Winchester Model 1895 rifle chambered in .405 Winchester with great success on a number of African big game species, there is a lot more to the story of the cartridge than just Roosevelt’s hunt.

In today’s post my dad will go over the history of the .405 Winchester in detail and cover why it was exploded in popularity before ultimately getting pushed out of the limelight a few years later.

The .405 Winchester was first introduced in 1904 chambered in the classic Winchester 1895 rifle. The legendary gun designer John Browning built the Winchester 1895 around a box magazine and a very strong action lock up so that it could utilize pointed bullets and the more powerful calibers designed to use the new smokeless gun powders.

The first mention of the 1895 rifle was in the Winchester Repeating Arms 1896 catalog. The rifle was first chambered in the black powder .38-72 and .40-72 Winchester calibers. However, what really caught the eye of hunters at the time was the fact that the rifle was also available in the brand new .30 US Army (aka .30-40 Krag) cartridge. The .30 Army was one of the first commercially available cartridges that utilized smokeless powder and sportsmen of the day were amazed at the enhanced killing power and flat trajectories obtainable with the new wonder powder.

As impressed as hunters were with the .30-40 Krag, they got even more good news when Winchester introduced the .405 Winchester (aka the .405 WCF) in 1904. Also loaded with smokeless powder, the original Winchester .405 load propelled a 300 grain round nosed bullet at an astounding 2,200 feet per second (3,225 foot pounds of energy)!

Especially when compared to other loads of the day like the .45-70 Government (405 gr bullet at 1,350fps for 1,639 fpe) or the .50-110 Winchester (300gr bullet at 1,600fps for 1,706fpe), the .405 Winchester offered a gigantic leap forward in performance for hunters who wanted a hard hitting and flat shooting cartridge. Interestingly enough, the .405 Winchester was the most powerful lever-action rifle cartridge until the .444 Marlin came along over 50 years later.

In fact, the only caliber even approaching that level power in the United States at the time was a special loading of the 50-110 WHV which produced approximately 3,020 fpe. However, this was a special high velocity loading using a very light bullet which gave poor penetration in big heavy boned animals due to its poor sectional density.

After its introduction, the 1895 rifle and .405 Winchester cartridge quickly became very popular among American hunters. Winchester followed up on the success of the cartridge by offering it in their Model 1885 single shot rifle. Remington also tried to capitalize on the popularity of the .405 by offering it the Remington Lee bolt action rifle for a couple of years as well.

The .405 Winchester was powerful enough for use on any North American big game from whitetail deer all the way up to moose and grizzly bear. At the same time, it was also excellent for use on just about every species of African plains game. Though it’s on the light side and has a relatively low sectional density for thick-skinned dangerous game like buffalo and elephant when compared to cartridges like the .375 H&H and .416 Rigby, hunters have used the .405 Winchester to successfully take just about every species of dangerous game over the years.

Theodore Roosevelt was perhaps the most famous hunter to ever use the .405 Winchester cartridge and the Winchester 1895 rifle. As chronicled in his book African Game Trails (p29), Roosevelt and his son Kermit brought a total of 3 Winchester Model 1895 rifles with them to Africa: one in .405 Winchester for each of them and a third one in .30-03 Springfield for Kermit.

I had the little Springfield, and was anxious to test the new sharp-pointed bullet on some large animal. the biggest bull was half facing me, just two hundred and eighty yards off; I fired a little bit high and a trifle to the left; but the tiny ball broke his back and the splendid beast, heavy as a prize steer, came plunging and struggling to the ground. the other bull started to run off, but after I had walked a hundred yards forward, he actually trotted back toward his companion; then halted, turned, and galloped across my front at a distance of a hundred and eighty yards; and him too I brought down with a single shot. The little full-jacketed, sharp-pointed bullet made a terrific rendering compared with the heavier, ordinary shaped bullet of the same composition.

Over the course of their expedition, the two men took over 500 animals, to include a number of lion, elephant, rhino, and buffalo in addition to hundreds of antelope. Though Roosevelt did not take every single animal with the .405 Winchester, he used it often enough to thoroughly evaluate the effectiveness of the cartridge on a wide variety of game.

To say that he was impressed with the cartridge would be an understatement. However, while Roosevelt was very pleased overall with the performance of the the .405 Winchester in Africa, and did take several species of thick skinned game like hippo and rhino with it, he also noted some of the limitations of the cartridge as well (p141):

The Winchester and the Springfield were the weapons one of which I always carried in my own hand, and for any ordinary game I much preferred them to any other rifles. The Winchester did admirably with lions, giraffes, elands, and smaller game, and, as will be seen, with hippos. For heavy game like rhinoceroses and buffaloes, I found that for me personally, the heavy Holland was unquestionably the proper weapon.

Truth be told, most African Professional Hunters would agree with his assessment of the cartridge today: it’s great for hunting many animals, but there are many better choices for thick-skinned dangerous game than the .405 Winchester.

If you’d like to see an assessment of a similar cartridge for hunting thick-skinned dangerous game, read this article:

Read This Before Hunting Cape Buffalo With The .45-70 Government

Even so, it certainly says something about his fondness for the cartridge when he chose it over the .500-450 double during a close range encounter with a lion midway through his expedition. It was this encounter that led to the now famous quote that he documented on page 200 of African Game Trails:

Tarlton took his big double-barrel and advised me to take mine, as the sun had just set and it was likely to be close work; but I shook my head, for the Winchester 405 is, at least for me personally, the “medicine gun” for lions.

Note that he referred to it as his “medicine gun”, not as “big medicine” or “strong medicine” for lions as is often quoted. While he may have indeed used those terms to describe the cartridge at some point, he did not do so in African Game Trails. 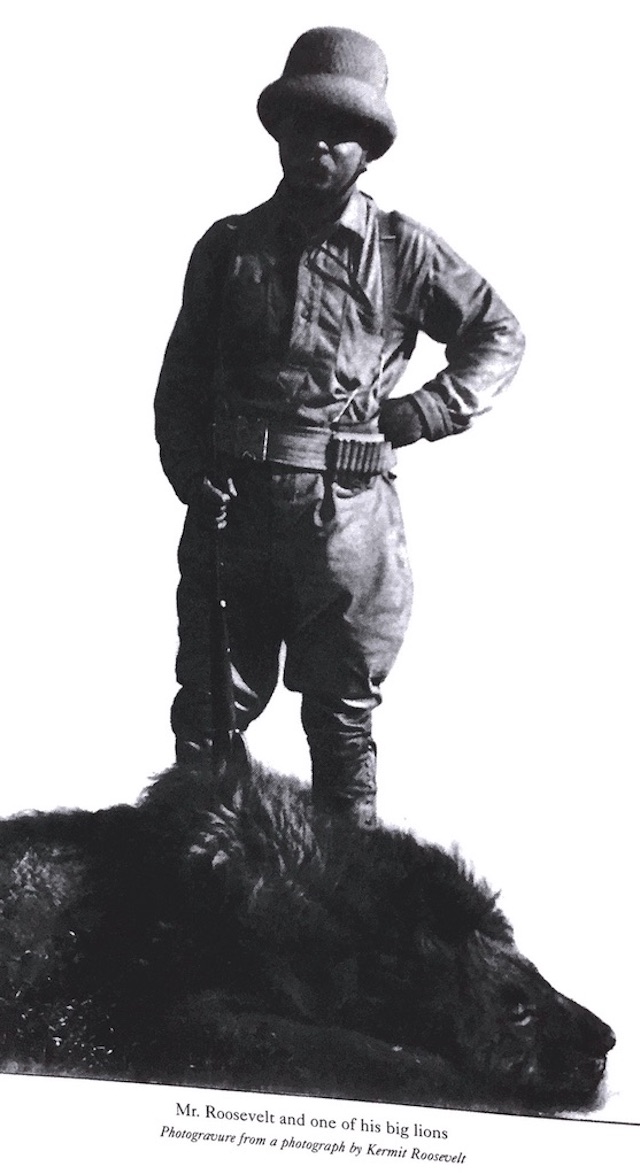 While Roosevelt’s colorful endorsement of the .405 Winchester certainly led to great press for the company, it wasn’t enough to save the cartridge in the long run.

For one thing, the Winchester 1895 had a reputation for punishing recoil when equipped with the standard curved rifle butt plate. This likely enhanced its reputation as a powerful rifle, but it was also distinctly unpleasant to shoot. The fact that the cartridge used .411″ bullets was another strike against it, since that’s a unique size that requires custom production bullets unlike the extremely common .284″, .308″, and .458″ bullets that are used by so many other popular cartridges.

Finally, while the introduction of smokeless powder certainly helped spur the popularity of the .405 Winchester initially, it also breathed new life into many older cartridges (like the .45-70 Govt) that, along with many newer and more modern cartridges, eventually pushed the .405 Winchester aside.

However, many hunters and shooters in the USA still have a certain nostalgia for the cartridge. For that reason, Ruger produced their ubiquitous Number 1 Tropical rifle in .405 Winchester for a time and Winchester has offered a couple of limited commemorative production runs of Model 95 rifles made by Miroku over the years as well.

.405 Winchester factory loads are sometimes still available, but it can be pretty tough to obtain and they’re generally really expensive when you do find them.

Fortunately, the .405 lends itself well to reloading and the necessary components are widely available. The 300 grain Hornady Interlock and Barnes TSX bullets are particularly high quality choices for reloading. Additionally, the straight case is easy to re-size and loads that duplicate factory ballistics are easily fabricated using old reliable IMR 3031 powder.

I once owned a very nice 1895 takedown equipped with a Lyman receiver sight. I can say from experience that the .405 is an excellent deer, hog rifle and is certainly capable of taking the largest big game animals in North America when used within its limitations. 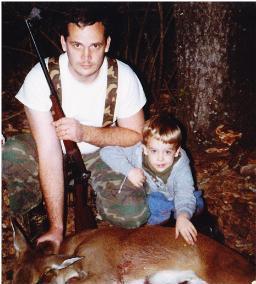 Final Thoughts On The .405 Winchester

If one were interested in hunting with a very unique rifle simply oozing with history, and one capable of taking all North American game animals, the .405 Winchester is a great choice. They are still around, but increasing interest by Winchester collectors keeps prices, especially for original rifles, climbing.

To see some of the other posts my father has written on the blog, visit the links below:

The .219 Zipper: A Good Cartridge That Didn’t Quite Pan Out

One Man’s Attempt At Explaining Hunting To Non-Hunters

NEXT: THE 9.3x62mm MAUSER: AN UNDERRATED AND UNDERAPPRECIATED BIG GAME CARTRIDGE