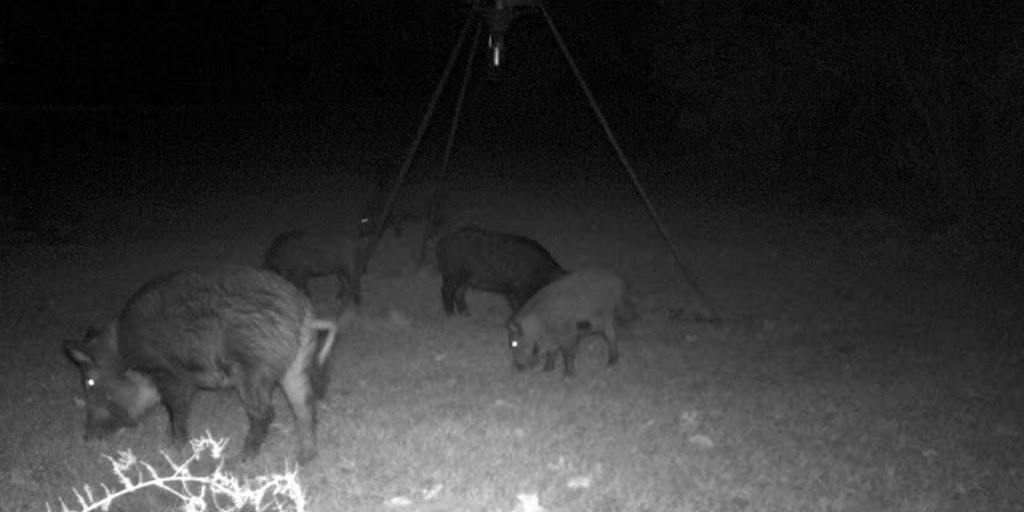 Check out this article about feral hogs and the all problems they are causing in Texas.

Today the state of Texas, along with many others, is literally under siege by feral hogs. Getting a good census of the feral hog population is difficult, but recent studies estimate the population at over 3 million hogs in Texas alone. They cause millions of dollars worth of crop damage annually and can have a significant negative effect on the populations of game animals, such as white tailed deer. Fortunately, hogs are a great species to hunt and sportsmen can help reduce the damage that hogs do to the environment by actively and aggressively pursuing them.

Hogs are an introduced species in the United States and were brought to the continent by European explorers and settlers centuries ago. Since adult hogs have few natural predators other than man, they have readily adapted to life here. Hogs are now found in 39 states and populations have literally exploded over the last few decades.

Over the years, the descendants of the originally introduced hogs have bred with domestic pigs that have escaped from farms. This has resulted in an amazing variety of different colors, shapes, and sizes of wild feral hogs. It is not unusual to see very different looking hogs in the same sounder and even the same litter. Typically, adult boars weigh 120-220 pounds, with sows being slightly smaller. However, every now and then significantly larger hogs turn up in various places across the United States. Indeed, big boars that weigh 300 pounds, or even more, are sometimes encountered in areas that have a good supply of food.

Hogs are omnivorous and will literally eat whatever they can find. They will often use their tusks to tear up the ground and eat roots, worms, and any other bugs that they find. Overnight, a group of hogs can destroy a well groomed lawn or a farmer’s field and make it look like someone tilled it up with a tractor. Hogs will also commonly eat acorns, apples, corn, and nearly any other crop that they encounter. In addition, they have been known to eat virtually any animal that they can catch. This most often includes snakes and even the occasional white tailed deer fawn.

A sow will usually give birth to her first litter of 2-8 piglets before she is one year old. When there is plenty of food available, a sow may give birth to two or even (rarely) three litters of piglets a year. So theoretically, one sow could produce up to 24 offspring in a single year! With this in mind, it is not difficult to understand how the feral hog population in the United States expanded so rapidly.

Feral hogs are also extremely intelligent animals, maybe even the smartest game animal in the United States. They have good eyesight and hearing, as well as an outstanding sense of smell. Their intelligence, combined with their excellent senses, can make them challenging to hunt.

Fortunately, Texas has very liberal restrictions when it comes to hogs and is one of the best states for hunting hogs in the USA. They are not legally considered game animals in the state, so there is no closed season and no bag limit. In Texas it is legal to hunt them over bait and even from a helicopter.

Most hogs in Texas that are shot by hunters are taken by chance while hunting deer. However, they are a very entertaining and challenging species to hunt on their own and more are being hunted each year. While a formidable opponent that deserves respect, they are by no means invincible and do have their weaknesses.

Their main weakness is the thing that makes them the most destructive to their habitat: their stomach. Hogs will readily come to bait and will often eat for an extended period of time. However, they quickly learn not to feed during daylight after experiencing hunting pressure. In this case, it may be beneficial to start hunting them at night where legal.

Additionally, hogs are an animal that can also be successfully stalked. They are very dependent on water, both for drinking and to roll in the mud, especially when it is hot. Slowly walk low lying areas with lots of water in addition to areas where they are known to feed. If you can catch them actively feeding, hogs are usually very noisy animals and are not typically difficult to sneak up on. The noise of their rooting and feeding will both aid you in locating them and cover up the sounds of your approach.

However, while they may not notice the occasional crunch of leaves from walking on the ground, hogs are very adept at discerning unusual noises, especially metallic noises such as a safety being turned off on a rifle. No matter which method you use to you hunt them, make sure that you always hunt with the wind in your favor. Their sense of smell is probably their strongest attribute and no amount of scent eliminating spray will hide your smell from the keen nose of a hog.

Since they are capable of eating almost anything, hogs have a very large and well developed digestive system. This means that their stomach sits considerably further forward in the body than a deer’s stomach does. Be sure to take this into account when placing your shot because the traditional behind the shoulder shot that works great on deer can very easily hit the front of the stomach on a feral hog.

This can lead to a very bad situation. Pound for pound, hogs are much tougher than deer are and can cover a considerable distance after being shot in the stomach or intestines. Trust me when I say that you certainly do not want to be following up a gut shot hog in heavy cover.

For one thing, since hogs typically have a substantial layer of fat to go with their thick hide, bullet holes have a tendency to close up after a short distance, which can significantly complicate tracking them. For another thing, hogs, especially wounded ones, can be dangerous to hunters. Even though they are not usually aggressive towards humans, every now and then an unwary hunter is injured, or even killed by a wounded hog.

When aiming at a hog, place your shot directly in the center of the shoulder and about one third of the distance up the body on a hog that is standing broadside to you. This will result in a bullet that hits both lungs and possibly the heart as well. No hog will run very far after taking a bullet through the boiler room like that.

Much has been made of the “armor plate” that is present on boars. They do indeed have a “shield” of cartilage on both shoulders that is used to protect their vitals when fighting with other hogs. While it might occasionally stop an arrow or a really low powered bullet from a cartridge like the .22 Long Rifle bullet (and even then, the shield might not stop it), this cartilage is not bulletproof.

A lot of people hunt hogs using AR-15 style rifles chambered in .223 Remington, 6.5 Grendel, 6.8 SPC, and .300 Blackout with great deal of success, but I personally lean towards cartridges like the .308 Winchester. True, you don’t need an elephant gun if you’re going hog hunting. However, if you encounter a giant hog you will not regret shooting him with a larger bore rifle like a .35 Remington, .45-70, or even one of the big bore AR-style rifles like the .450 Bushmaster, .458 SOCOM, or .50 Beowulf.

If you’d like to learn more about specific firearms that are great for hog hunting, make sure you check out this article:

7 Of The Best Hog Hunting Guns

For those that successfully kill a feral hog, an added bonus is their meat. Sows and small (less than 150 pound) boars provide very tasty table fare. I personally think that they taste even better than farm raised hogs. Additionally, for those out there who care about organic food, remember that feral hogs provide the most all natural, free range, organic pork available.

Finally, make sure you take the necessary precautions when handling feral hogs since they are carriers of many diseases that are transmittable to humans. Always wear gloves and thoroughly wash your hands and tools after handling a hog. As with all pork products, ensure that you fully cook the meat before consuming it.

Unfortunately, it appears as though Texas is losing the war on feral hogs and there is no good solution to the problem yet. While hunting alone will not solve the feral hog problem in Texas, I believe that it is certainly part of the solution. Since they provide such an exciting hunt along with excellent quality meat, hunting feral hogs is something that is certainly worth looking into if you do not already do so. More and more hunters are doing just that: last year in Texas more feral hogs were killed by sport hunters than by any other method. Hopefully, this trend will continue and we can start to get a handle on the feral hog problem.