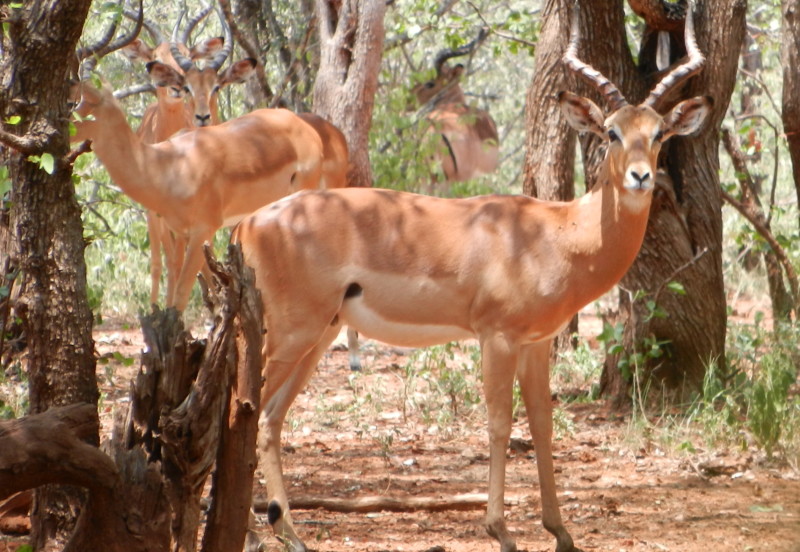 This article is part of a series about some of the various species available for hunting in Africa (along with blue wildebeest, warthog, and zebra). In this series, I plan on describing the physical attributes and distribution of each species in addition to recommended hunting methods, recommended cartridges, and shot placement. My first article is about one of the most widely distributed and commonly hunted animals in Africa: the impala.

The impala is a medium sized antelope that is found in the savannahs and in some forests in Africa. Approximately the size of American white-tailed deer, males (rams) usually weighing from 90 to 170 pounds. They are sexually dimorphic, so females (ewes) are somewhat smaller, usually weighing 70-100 pounds. Impalas usually have a short, light brown colored coat on the back and flanks with a white underbelly. Only rams have horns, which grow longer and thicker as the ram ages.

Safari Club international recognizes three subspecies of impala: the East African Impala, the Southern Impala, and the Black-Faced Impala. All three subspecies are similar in size, but the East African variant has a slightly larger body and horns than the others. The East African Impala is typically found in Kenya, Tanzania, and Uganda. The Southern Impala is the most common of the three and is found in Tanzania, Mozambique, Zimbabwe, Zambia, Malawi, Swaziland, South Africa, Botswana, Namibia, and Angola.

They are gregarious animals and are typically found in herds ranging from a few dozen to hundreds of impala. Generally, ewes and fawns live in herds with one dominant ram while young rams live in bachelor herds, though this can change when conditions are tough a and food is scare. One thing to keep in mind is that they tend to bunch even closer together than usual when alarmed, so a hunter must take great care not to take a shot that would injure more than one impala.

There are several possible methods available for hunting impala. If it is legal in the area you will be hunting, and you consider it ethical, probably the easiest way to hunt them is to ambush herds from a blind overlooking a water hole. Another commonly used method is to attempt a stalk on a feeding herd during the morning or evening when they are most active. While this can still be a very successful hunting method, it can be very difficult to get inside shooting range because they have very good eyesight and one must avoid the watchful gaze of dozens of animals. It is best to go slowly and make the most of any available concealment, such as folds in the terrain or clumps of vegetation in order to get close enough for an ethical shot.

While they are not particularly large or tough animals, impala must still be given the proper amount of respect when choosing a caliber and bullet for hunting. In some areas it is legal to hunt them with .22 caliber centerfire rifles (.22 Hornet, .223 Remington, .220 Swift, etc.). However, I feel that these cartridges are on the light side for ethical hunting (culling is another matter entirely).

Due to the fact that longer range shots are often necessary when hunting impala, especially in windy, open savannah areas, I recommend using a relatively flat shooting cartridge in the 6mm to .30 caliber range. The .243 Winchester, .270 Winchester, .280 Remington, .280 Ackley Improved, 7mm Remington Magnum, and .30-06 Springfield are all calibers ideally suited to the challenges associated with impala hunting have taken more than their fair share of impala over the years.

However, consider that most hunters will hunt several other species that are both larger and tougher than impala (like cape buffalo) on a safari and often use one rifle to do so. With this in mind, there is absolutely nothing wrong with hunting impala with a larger, more powerful cartridge than those previously listed. Indeed, many hunters go on safari with only a .375 H&H or .375 Ruger and successfully hunt everything from klipspringer to elephant with it.

A shot there will hit the top of the heart along with the lungs and the impala will quickly expire if hit with a well constructed bullet. Aiming for this spot also has the advantage of giving the hunter a large margin of error; a bullet that hits slightly high, low, forward, or to the rear will still hit vitals and ensure a quick and ethical kill. This will allow for a relatively quick follow up and minimize the chances of losing the animal.

Impala are one of the most widely distributed species available for hunting in Africa, provide tasty fare for the table during a hunt, and offer a unique and beautiful trophy to take home. Additionally, they provide a relatively easy, yet still enjoyable hunting experience. Due to this, they are one of the most consistently popular species for hunters and I highly recommend them for those booking a trip to Africa, especially a first safari.

The Perfect Shot by Kevin Robertson was used as a reference for shot placement.