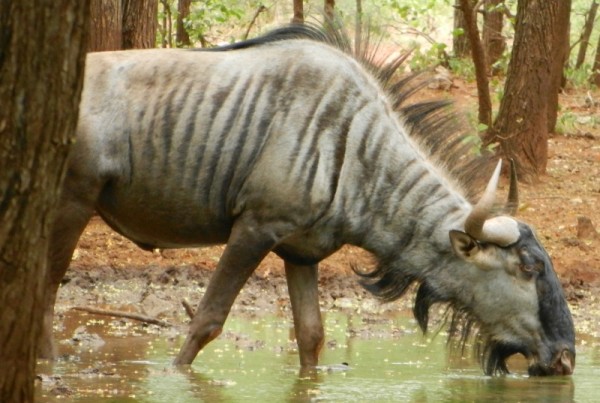 It’s been quite a while since I’ve done an African animal profile. However, it’s now the peak of the hunting season in most countries in Africa. In honor of this, I’ll continue to post further profiles of African animals over the next few weeks in the same spirit that I wrote about Impala and Warthog this time last year. Perhaps these reports will inspire some of my readers to pursue dreams of hunting in Africa. Today, I’m writing about the bread and butter of almost any African plains game safari: the Blue Wildebeest.

Blue Wildebeest, also known as brindled gnu or black bearded wildebeest, are a large, muscular species of antelope with large horns that curve in and upwards. Males are slightly larger and darker in coloration than females and can weigh upwards 600 pounds and stand 4-5 feet tall. Females are known to weigh as much as 550 pounds.

Most adult wildebeest have a deep silvery grey or brownish coat with  manes consisting of long, jet black fur. Blue Wildebeest also have dark brown stripes on their necks and ribs, giving them their nickname of brindled gnu. Both males and females have horns, though males generally have significantly larger horns than females.

The Nyasa Wildebeest is the smallest specimen of Blue Wildebeest and presently live in southern Tanzania and northern Mozambique. They were once present in Malawi (formerly known as Nyasaland, hence the sub-species name), but are now extinct there. Nyasa Wildebeest have a more brownish color to their coats than the other sub-species of Blue Wildebeest. The hairs on their manes are somewhat rigid and stick up in the air. Their population is estimated at 50,000-75,000.

The Cookson Wildebeest is the largest of all the wildebeest and is found only in the Luangwa Valley of Zambia. Their coat is more grey in color than any other sub-species. Like the White-Bearded Wildebeest, their manes also are lank. Their population is estimated at 5,000-10,000.

Blue Wildebeest are grazing animals and are generally live in herds of 20-50 animals or more in more open terrain. Their snouts are well adapted for feeding on grass, which is their favorite food. However, Blue Wildebeest will also eat shrubs and leaves if grass is in short supply. Though they are most often found in open terrain, they can also be found in areas with thick vegetation as well. They are very resilient animals, but are dependent on water and will drink twice daily when water is available. As a result, they are most often found in moist grasslands and in other areas near water Blue Wildebeest are often found in the company of zebra, springbok, impala and hartebeest on the open plains.

There are several possible methods available for hunting Blue Wildebeest. Probably the most commonly used method is to attempt a stalk on a feeding herd of wildebeest during the morning or evening when they are most active. However, this can be challenging due to the difficulty associated with getting inside shooting range while avoiding the watchful eyes of dozens of Blue Wildebeest (to say nothing of the zebra, or any other animals with them). Another commonly used hunting method, if it is legal in the area you will be hunting, and you consider it ethical, is to ambush Blue Wildebeest from a blind overlooking a water hole.

Blue Wildebeest have a well deserved reputation as very tough animals and can take a lot of punishment before they go down for good. Indeed, they have the nickname “the poor man’s cape buffalo” for a good reason. For this reason, it is very important that hunters be appropriately armed when pursuing them.

Since they are so tough, the. 308 Winchester is the minimum caliber that I recommend for use at short to medium range (out to 200 yards). For some of the longer shots that may present themselves when hunting Blue Wildebeest in open areas, cartridges such as the .280 Ackley Improved, 7mm Remington Magnum, .30-06 Springfield and the .300 and .338 Winchester Magnums are also great choices. For those that prefer even larger caliber rifles, a rifle chambered in 9.3x62mm or .375 H&H is not using “too much gun” on one of these very tough animals.

A saying among those who have pursued Blue Wildebeest is that “They are born sick and get stronger and run farther with each lead pill you give them.” Like I stated above, Blue Wildebeest are very tough and must be taken seriously by hunters. While they are not normally aggressive towards humans, it is not uncommon to hear about injured wildebeest charging and injuring hunters.

For this reason, it is essential that hunters use deeply penetrating bullets and place their shots appropriately. Additionally, no matter what cartridge and bullet they use when hunting Blue Wildebeest, hunters should not be afraid to take a rapid follow up shot if possible. This can potentially avoid a frustrating and/or dangerous situation further down the road.

Fortunately, shot placement is not very complicated. When they are standing broadside, simply aim along the back edge of the front shoulder approximately 1/3 the way up their body. This will result in a heart/lung shot and the wildebeest will likely not go very far after the shot.

However, I do not recommend that taking frontal shots. As you can see in the photo below, there is a very small window to the vitals and it is easy to hit too far to either side, or hit the snout. In either case, there is a high risk of wounding and losing the animal. For the same reasons, I do not recommend head or neck shots on wildebeest, except for very experienced marksmen and hunters.

Blue Wildebeest are among the most widely distributed and commonly pursued species in Africa. They are also nearly as tough and challenging to hunt as a Cape Buffalo, but much more affordable. Due to this, the Blue Wildebeest is considered one of the cornerstones of a “classic” safari almost anywhere you go on the continent. No safari is complete without a wildebeest and I highly recommend adding one to your list if you’re planning a trip to Africa in the near future.